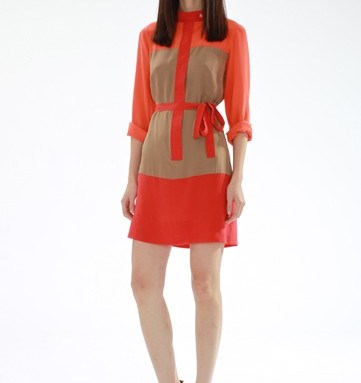 When it comes to new kids on the block, fashion has its share. And even if some have been designing for several seasons, their first formal runway shows and presentations for spring are a debut of sorts. From embellished cocktail dresses to organic cotton separates with multiple uses in mind, the new offerings cover the range.

Taking inspiration from the American west and Kerouac’s “On the Road,” Brooklyn-based Rae, a Parsons the New School for Design alum whose résumé includes stints at Costume National and Morgane Le Fay, relies heavily on romantic styles with touches of chiffon ruffles and lace trim on flowing dresses, as well as utilitarian styles such as a chambray shirtdress and a loose hemp tank dress.

Next: A Bronx native and Central Saint Martins-trained designer >>

Next: Inspired by architecture >>

Having volunteered as a personal shopper for the blind and patented a clothing label in braille, it’s no surprise that Denise Lasporgata stresses a tactile experience in her lineup. To wit, embellishment such as sequin paillettes, and pleated tulle in her collection of mainly cocktail dresses. For day, she focuses on graphic prints for dresses, tops and pants.

Zernich has a solid background in fashion; she attended Parsons in both New York and Paris and interned at Donna Karan and Michael Kors. As an intern at Jill Stuart, she worked on flat drawings and honed her expertise in sportswear and dresses. Her experience comes through in her first namesake collection: a charming 20-piece lineup of mainly dresses with lots of ruffles and lace, as well as a smattering of sportswear.

Cohen was hooked on fashion the moment he saw Madonna in Jean Paul Gaultier’s cone bra. The California native attended Parsons and has interned with Oscar de la Renta, Doo-Ri Chung and Ashleigh Verrier, and freelanced for Patricia Field. His first collection shows an equally strong hand with sportswear and evening gowns, and was inspired by painted brushstrokes. Even the bright silk prints evolved from photos Cohen took of paintbrushes.

Harper is no stranger to the industry, having interned at Alexander McQueen and competed as a finalist during the sixth season of “Project Runway.” The Central Saint Martins grad designed for Tory Burch while building her eponymous line, a collection of simple contoured pieces such as a dress and miniskirt accented with custom prints based on sound-wave patterns and finished with subtle trimmings such as perforated leather.

Born and raised on Long Island, Cassis was a competitive gymnast for 10 years before venturing into fashion and attending Parsons. Her lineup is characterized by classical dress shapes, à la Jackie O (think fitted sheaths) with bold colors and mod designs.

Eliza Starbuck, a Parsons grad with stints at Rod Keenan and J. Crew, believes in sustainability and functionality. To that end, all of her garments, in linen and Tencel fabrics in a neutral palette, have multipurpose designs, such as a romper that converts to a dress and a jacket that can be worn two ways.