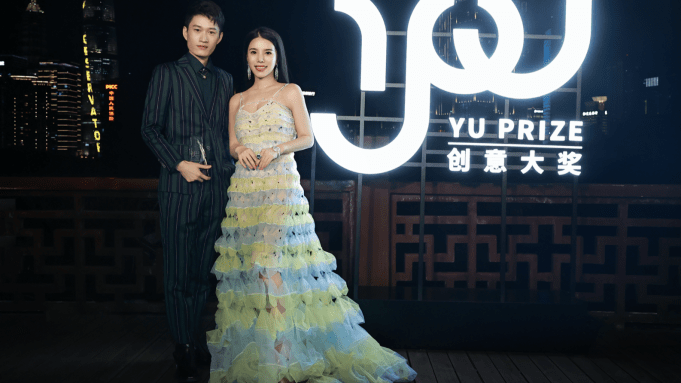 SHANGHAI — Chen Peng, the designer best known for his outsize down puffer jackets, took home the top award from the Yu Prize, the platform founded by Wendy Yu that seeks out China’s best up-and-coming fashion talent.

Chen will receive funding of 1 million renminbi, or $152,000, in addition to a year’s mentoring from OTB Group, retailing at Harrods, and a showcase by the Fédération de la Haute Couture et de la Mode. The inaugural event grew from one prize, as it was originally announced, to four awards that grant the winners a total of 1.5 million renminbi, or $229,000.

“I believe that the designer [Chen Peng] is really representing the best of the new young generation,” said Yu, founder of the Yu Prize and beauty brand Yumee, at the awards dinner ceremony here on Wednesday evening. “I really loved every one of the finalist designers but I chose this designer because whether it was creativity or commerciality, I could see real potential.”

“Right now, I’m just so excited to have won this award. It’s really such a good platform for Chinese designers,” said Chen, who graduated from the London College of Fashion in 2015. His brand, which has been worn by celebrities like Lady Gaga, has grown to include over 100 stockists around the world.

The second largest award of the night with 300,000 renminbi in prize money went to Susan Fang, who was revealed as the winner of the Creative Pioneer Prize sponsored by Piaget, for “expressing the most extraordinary creative vision and fashion as an art form.”

“We thought it was very good to have a dedicated price to reward creativity in itself,” said Mathieu Delmas, managing director of Piaget China. While Piaget had not yet signed on to sponsor the Yu Prize past this initial year, he commented, “From the first edition, and from what I’ve seen, I think it’s something that’s going to last.”

While the above prizes were based on the designers’ existing collections, the remaining two — which each carried 100,000 renminbi in prize money — were evaluated off the submission of an assignment.

Danqi Chen, who designs the brand Donsee10, was awarded the Yu Prize Sustainability Champion in partnership with Rémy Martin. Finalists were asked to conceptualize a sustainable item and Chen presented a bag design inspired by biodynamic grape harvesting. She envisioned it would be created from botanical leather and derived from wine residue whilst featuring Chinese calligraphy.

The Infinite Beauty Award, meanwhile, asked designers to create something based off Yumee’s signature tassel lipstick and brand value of “arts-inspired beauty.” Wanbing Huang, the designer behind At-One-Ment, won by presenting a spiral gown concept made of plant-based polyester that could be worn several ways, such as full-length or as a skirt.

The Yu Prize winners were whittled down from 16 finalists by a panel of leading fashion industry figures. The group — which include Danshan, 8on8, Garçon by Gçogcn, Oude Waag, Ming Ma, Redemptive, Shie Lyu, Shushu/Tong, Shuting Qiu, Yueqi Qi, Windowsen, and ZI II CII EN — is featured in a public exhibition running until April 26 at HKRI Taikoo Hui mall.