The French do love Valentino, a fact certified on Thursday afternoon when the designer was presented with the Legion d'Honneur during an emotional ceremony in a gilded reception room overlooking the Palais Royale. 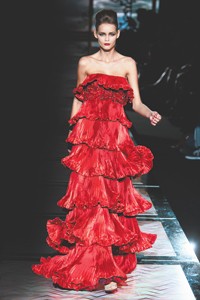 Valentino: The French do love Valentino, a fact certified on Thursday afternoon when the designer was presented with the Légion d’Honneur during an emotional ceremony in a gilded reception room overlooking the Palais Royale. “I have remained very faithful to France,” he said, fighting back tears in his short, poignant acceptance speech, after being decorated by Renaud Donnedieu de Vabres, France’s minister of culture and communications. He also thanked key people, most notably Giancarlo Giammetti.

Well-wishers returned the praise, both personal and professional. “They’re like my brothers,” Georgina Brandolini said of Valentino and Giammetti. “We’ve known each other for years,” said Betty Catroux, clearly unconflicted by her affiliation with Yves Saint Laurent. “We love to laugh. I love his sense of humor.”

Legions of haute devotees also love his clothes, and with the couture collection he showed on Wednesday night, Valentino should keep them enthralled. That is because he knows when to say when, not when it comes to embellishment — a Val gal can never have enough — but when it comes to pandering to fringe types, whether the youth market or the editorial set. And, ironically, that attitude has opened the door to a whole new world of Gwyneth Paltrow and Elizabeth Hurley types, the latter of whom joked at the ceremony that “once in a while, I manage to squeeze into one of his dresses.”

Fall will see Valentino’s women adorned in couture’s rich trappings, often delivered with Russian-inspired joie de glitz. And given the realities of emerging couture economies, who could blame him? By day and for that early-evening window he still honors as “cocktail,” he kept his shapes clean and defined, in curvy suits and full-skirted party dresses, perhaps under a pouf-sleeved bolero or bejeweled, jaguar-print mink jacket. High evening brought a host of possibilities — a grand, jet-beaded ballgown; a sliver-thin white column abloom with rose embroidery, and a pearl gray embroidered chiffon number. And he’s mad for tiers in a swirling golden lace, discreet silver pleats or a wild flurry of red organza. But then, Valentino’s ladies have always seen, and like to be seen in, red. Giving clients what they want — isn’t that what it’s all about? Chez Valentino, mais oui.