Chiara Ferragni on ‘Making the Cut,’ Slowing Down and the Power of Social Media

On Friday, the Italian digital entrepreneur is making her debut as a judge on the Amazon Prime Video’s show.

Fashion designers can’t neglect the impact of social media these days as their designs pop up almost immediately on the screens of potential customers’ smartphones. Amazon’s Prime Video streaming service certainly took that into account when putting together the cast for “Making the Cut.”

Italian digital entrepreneur Chiara Ferragni, with her 19.3 million followers on Instagram, knows a thing or two about social media influence. On Friday, she is joining the cast led by Heidi Klum and Tim Gunn as a judge for the final six episodes of the show, which took the seven remaining contestants to Tokyo and New York in a roving competition for a $1 million prize and the chance to turn their fledgling businesses into global brands with a year of mentorship at Amazon Fashion.

Ferragni, now quarantined at home in Milan in the wake of the COVID-19 outbreak, is taking some time to slow down her hectic life. “It’s been 45 days since I self-isolated at home and I’m now getting used to this routine,” she said.

Along with her husband, musician Fedez, she has been exploiting their online exposure to help fight the health emergency. As reported, the couple launched a GoFundMe campaign last month through a personal donation of 100,000 euros, aimed at delivering new hospital beds to the intensive care unit of Milan’s San Raffaele hospital. Through the initiative, they amassed more than 4.5 million euros and convinced the platform to pledge 250,000 euros from its commissions to other Italian hospitals. In addition, the proceeds from a capsule collection Ferragni most recently developed with Oreo were donated to a hospital in Bergamo, Italy.

Here, Ferragni discusses with WWD what it really takes to make the cut and how the current health emergency is changing not only the use of social media but also people’s approach to fashion and perhaps to their lives.

WWD: How was your experience as a judge on the show and how did you get involved in the project?

Chiara Ferragni: It was amazing! In February last year I was in Los Angeles for the Oscars and I had a few meetings with production companies, including one that was planning to work on a new format for Amazon that was meant to be a “grown-up” version of “Project Runway,” very different, more international and which involved traveling around the world so that designers could take inspiration from different places. Also, it introduced the possibility to purchase immediately each episode’s winning look….I thought it was an amazing project and I said yes.

WWD: In 2015, you appeared as a guest judge on “Project Runway.” In which way was this experience with “Making the Cut” different?

C.F.: “Project Runway” was an exciting experience as it was my first TV show in the U.S. I was nervous but Heidi made me feel comfortable and natural and also Dita Von Teese, who was in the same episode, was nice to me. “Making the Cut” has been even more exciting because of the format itself. As a roving show we got to experience different cities and see how each contestant was influenced by what they saw, in addition to appreciating their designs. My life also pivots on fashion and different cultures, different places so I found [the format] very much in tune with what I am. The fact that we were not necessarily looking for the most creative designer but to someone who could helm a global brand made it much closer to my approach to fashion. In my daily researches I don’t necessarily look for designers that are the most creative — which I think is a great quality but not enough — but rather for designers and brands that are indeed creative and unique, but also viable and able to trigger interest among buyers, for instance. The prize was juicy for everyone because $1 million can really make a difference for these brands, and the format worked like social media, with a see-now-buy-now [approach]. 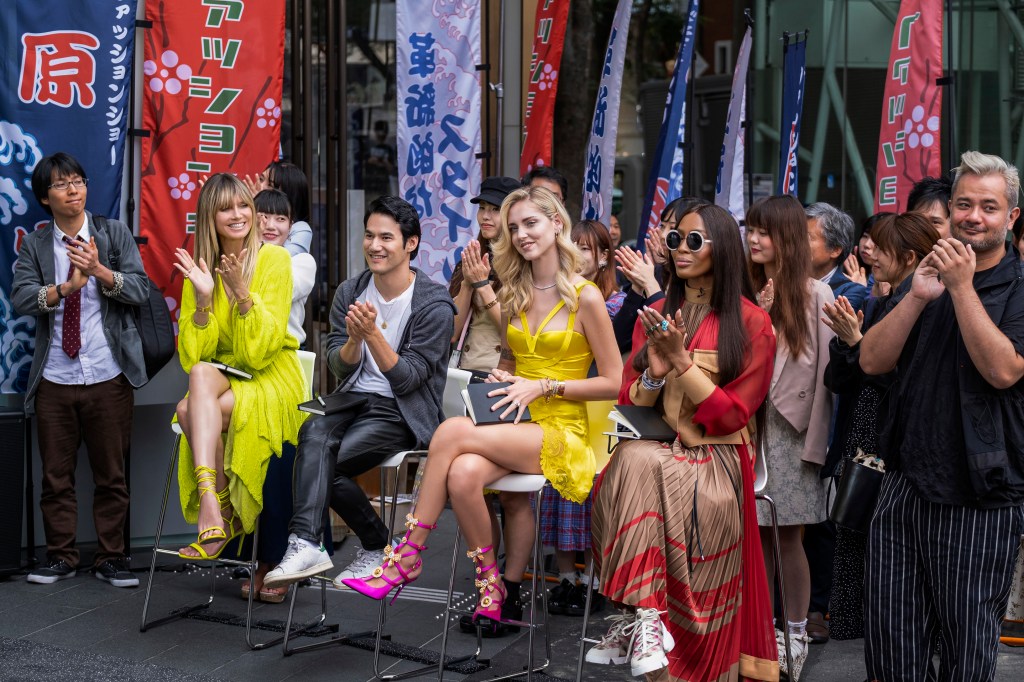 WWD: What impressed you the most about the competing designers and what were the skills you were really taking into account?

C.F.: Each designer was very different…the interesting thing was that they even changed from episode to episode, really depending on the tasks they were assigned…which sometimes did or did not speak to their aesthetics. As I expressed my opinions, I took that into consideration knowing some of them were more creative and arty, while others were more into approachable designs. To me, their challenge is to truly be able to create a global brand that people would want to buy into, with collections that are approachable, that you can easily imagine displayed in a shop window and effortlessly worn by customers. I also based my judgment on my experience with social media. For instance, Esther [Perband, a contestant] was crafting everything in black because that was her idea of branding, while in order to fully leverage the power of social media, we kept telling her that monochromatic looks could potentially be less eye-catching and penalize her, because you cannot perceive a product’s nuances, materials and how it’s made when you look at it from a screen. This really speaks to my experience; for example, I notice that when I put on a colorful or printed dress it’s more eye-catching and my online audience is more engaged. That’s important, too. I tried to give the same feedbacks I would receive from my 19 million followers, as I know pretty well what’s trending among them.

WWD: It looks like you brought a unique point of view to the judging panel.

C.F.: Yes, Naomi for instance was really influenced by the design quotient and how flattering a piece was, which is super important…on the contrary, I tried to share my personal experience, as much as Joseph [Altuzarra] did. Being a designer himself, he understands the value of creativity while acknowledging that the most flamboyant designs might not make the cut.

WWD: Did you feel the designers took today’s digitalized scenario into account while developing their collections or listening to your feedback?

C.F.: At the beginning we could not follow them on social media and so we did not know how they were used to communicating [their brands] on those platforms. For me, it was weird not to have visibility on how they approached social media and the Internet…they were really interested in our feedback; the most interesting thing was letting them explain their inspirations, because we could see their creations from a different perspective when they could elaborate. Some of the designers were really sticking to their vision, while others were really into our opinions.

WWD: The show is airing at a particularly tough time. How’s your quarantine life going?

C.F.: I think I’m facing this whole emergency the best way I possibly could. At the beginning, we were all worried, I decided to skip Paris [Fashion Week]…as the situation was already bad at the tail end of Milan Fashion Week and I remember being worried about attending events during the last few days, when the emergency was really upon us. I self-isolated and we were all anxious as the news was tough to digest. From the beginning I tried to sensitize people along with my husband, try to cheer them up and to give concrete support. These three things kept us busy and gave a new meaning to these days. I tried to sensitize people as I had the feeling people both in Italy and abroad — as 70 percent of my followers are foreigners — didn’t take it too seriously. We tried to create online content that could engage people, we did a few live sessions on Instagram singing from our terrace, involving local singers…including Andrea Bocelli, which was the most emotional one.

WWD: You did more than that. You started a fund-raiser that gathered 4.5 million euros to support Milan’s San Raffaele hospital. Did you expect such a huge response?

C.F.: Since the very beginning we tried to give a concrete hand. We made our personal donation kicking off what I believe was the first Italian crowdfunding. It was amazing because many more followed in the footsteps, allowing support for hospitals throughout Italy in so little time. It was great because for the very first time we saw the end results of our efforts, which is something that does not usually happen with charity projects: You know you’re doing good but you don’t necessarily see the end results. A lot of people supported us and gave visibility to our initiative…and we could see the new ICU at the San Raffaele hospital come to life after only 10 days.

WWD: Are you experiencing a shift in the way digital communication and social media marketing campaigns are perceived?

C.F.: My audience is increasingly interested in my daily life, maybe because they are spending more time on social media. I also think they’re more engaged as I probably inspired them and started to share information [on the outbreak] early on, also with my international audience. It’s a difficult moment to ink new collaborations and a lot of the projects I had planned have been postponed at least to September. The ongoing collaborations, that include posting and storytelling activities, are still going on, but I don’t want to advertise products that I don’t feel comfortable about right now. I’m sticking to those projects that are in line with this period of lockdown and quarantine. You need to be sensitive to avoid that those who are more affected by the current emergency might feel disappointed. You can always be fun but you should also always be sensitive.

WWD: Do you believe the current health emergency will affect the way we will approach our lives and fashion?

C.F.: I always thought that my job, the trips I do, what’s basically been my daily routine for the past 10 years, were all essential aspects of my life to be happy. In reality, they bring a lot of incentives to my mind and serenity for sure but they’re not the ones making me really happy. True happiness is knowing your relatives are safe and commit to spending quality time with them, with your loved ones. I believe we will all understand how much we took everything for granted….I think the outbreak has been such a black swan for us all that we will hardly forget it.