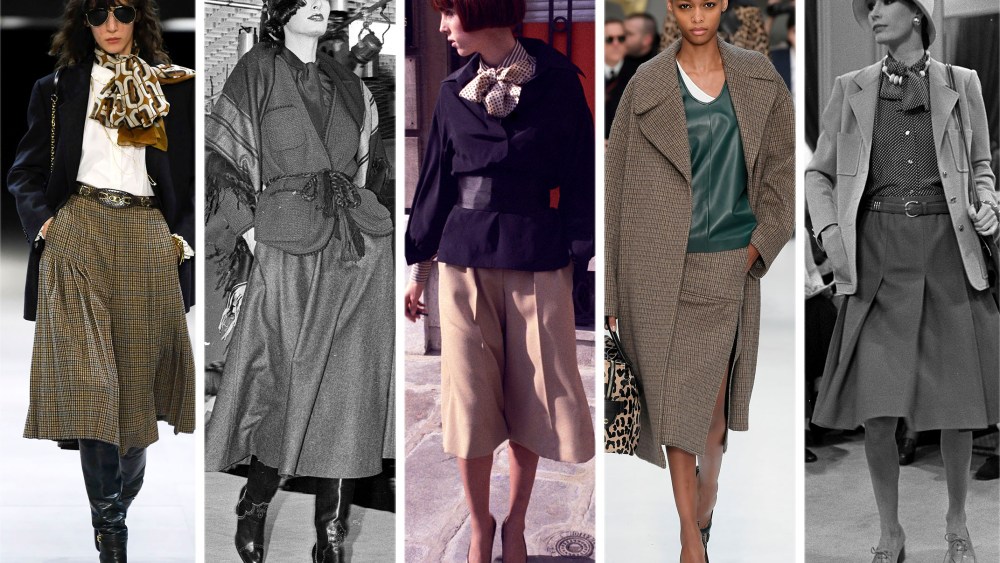 PARIS — Bourgeois style made its mark on the Paris runways for fall, but think twice before calling real-life French women the b-word.

For the 74-year-old model, the “bourgeois” woman is the living embodiment of boredom. “Bourgeois women follow codes and rules, all dress the same and share the same mind-set, which I hate,” she continued. “It’s an extremely pejorative word in France.”

“The bourgeoise is often late to trends: she ignores them like a snob,” said the model and designer. “For me the word has a negative connotation: it evokes convention, fear of fancifulness, something a bit reactionary.”

So why the prickly reactions?

“The history of the term ‘bourgeois’ is particularly interesting, because it has gone through a lot of semantic evolutions,” explained Laélia Véron, a stylistics and French language lecturer at the Université d’Orléans.

Deriving from the French word “bourg” meaning “borough,” in its first occurrence in 1100 the term “bourgeois” (pronounce it “boorjoa”) literally meant a city dweller, by opposition to those living in the countryside.

Its meaning took on socio-political weight with the French Revolution and the division of the French population into three main categories — nobility, clergy and third state. “Around that time, the bourgeoisie was at the top of the third state, an intermediary between aristocracy and the poorer population, and was essentially made up of businessmen working in cities,” said Véron.

The 19th century cemented the bourgeois’ white-collar reputation, pitting him against the working class. In the Trésor de la Langue Française, the official dictionary used by French language institution the Académie Française, the term is said to reference “a person belonging to the ruling middle class who doesn’t submit to manual labor and benefits from a comfortable situation.” In essence, the bourgeois doesn’t get his hands dirty.

“The bourgeois didn’t work, so was able to dress well every day, contrary to farmers and workmen who wore specific uniforms during the week, and only dressed up on Sundays,” explained Florence Müller, fashion historian and curator at the Denver Art Museum. “This cemented the bourgeoise as an idealized position, symbolizing wealth and status.”

But French novelists turned the bourgeois into a figure of ridicule. No wonder Emma Bovary was seeking adventures elsewhere when her bourgeois doctor husband Charles was such a wet blanket, to paraphrase Gustave Flaubert’s famous novel.

“At the end of the 19th century, French authors such as Stendhal and Flaubert saw a direct link between material comfort and narrow-mindedness,” explained Véron. “The bourgeois became someone who had no taste, no culture and remained politically conservative and fearful of change.” Used in the feminine, the term “bourgeoise” slowly came to represent a haughty, stuck-up housewife.

The May 1968 student riots and the birth of counterculture brought the bourgeoise down from her pedestal. The full skirts and nipped-in waists of haute couture, dreamt up by high-society designers who used to watch their wealthy mothers get dressed for charity balls, looked outdated against the jeans and cotton T-shirts of the Woodstock generation. “The bourgeois look became old lady-ish,” said Müller.

But the old lady came back with a vengeance. Fashion eventually got tired of the hippie look and grew thirsty for structure. To wit: the Seventies became the pinnacle of bourgeois style, with houses like Hermès and Celine making knee-length skirts and leather boots desirable to well-off older women — the brand’s established clients — and to a whole new wave of trendy French girls, who wore their silk scarves with a touch of irony.

“As surprising as it might sound, at the time the bourgeois look excited me as much as punk did,” recalled Müller, who as a teenager in the Seventies went down to the Céline store on the Rue de Rennes to lust over the brand’s beige sweaters, thin leather belts and sensibly heeled brogues.

Catherine Deneuve may have had something to do with it. Starring in Luis Buñuel’s 1965 film “Belle de Jour,” her portrayal of bored bourgeois Séverine who trades her cosseted life to become a high-class prostitute gave belted coat dresses and prim blouses a kinky edge.

“’Belle de Jour’ turned the bourgeoise into a sexual fantasy, a woman who never misses a Sunday church service but has an intense sex life,” explained Müller, who also cites pouty red-haired actress Stéphane Audran and Charlotte Rampling moodily posing in furs for Helmut Newton as the ultimate bourgeoises. “These actresses outlined the figure of the bourgeoise in popular culture: bored, constantly unhappy, but still considering herself to be above the rest of the crowd.”

Such a mass of contradictions is like fashion catnip. Fast-forward to the present day, and the bourgeoise is back: one of her early proponents was Nicolas Ghesquière, who riffed on “jolie madame” staples such as skirt suits, pleated skirts and day dresses in his exploration of French notions of elegance for the Louis Vuitton fall 2018 collection.

Soon the rest of the fashion world followed suit: for fall 2019, the bourgeoise’s stack-heeled loafers and sleeveless pullovers were at Gucci; her fur-lined wool coats at Y-Project; her high collars at Givenchy; her wool capes at Miu Miu, and her Hitchcock-ian tailoring at Rokh.

“In the early stages of my career, I was against anything bourgeois-looking, because I grew up surrounded with it,” said German designer Lutz Huelle. “It was the worse thing. For me, it was like dressing like my parents. That’s why I moved to London in the Nineties — to escape it.”

Yet his fall 2019 collection was peppered with bourgeois codes, such as cocktail jackets, belted trench coats and drop earrings. “The style used to feel old, but now that everything that used to be subversive has become the norm, the bourgeois look feels modern again,” he explained. “It’s a way to react against the fact that no one is surprised to see streetwear or denim worn at formal events anymore. Going back to the bourgeois look is like the last frontier.”

Rive Gauche-based brand Bourgine is a retro dream of velvet dresses, elbow patches and breeches. “Bourgeoise is all about the uniform, a fantasized vision of a neatly dressed woman, representing good taste, neutral colors, perfect cuts — and boredom,” summed up designer Caroline Bourgine, who spices her safer pieces with printed T-shirts and bright colors. “The temptation to rough her up a bit is too big: the precision of such codes gives a designer a clear roadmap, but can also make for a lot of fun.”

There’s great irony in the latest comeback of bourgeois style in Paris: The yellow-vest protests, which began in November in reaction to a fuel-tax plan, coalesced into a protest against anything luxury-related and five-month-long-and-counting social uproar. Imposing town houses in the gilded 16th arrondissement and high-end boutiques on the Champs Elysées were targets of the protesters’ frustration against Emmanuel Macron, the so-called “président des riches,” or president of the rich in English.

So why is the prim, proper and decidedly affluent bourgeoise back on the runway?

“Society is questioning its own values,” said Müller. “Both France and the U.S. don’t feel understood by their current government. Fashion is symbolic: it doesn’t spell things outright, but leads us to question our opinions and values.”

In such tumultuous times, the bourgeois look is seen as a safe fashion haven.

“The bourgeoise is a nostalgic symbol, harking back to a time where society was clearly structured,” continued Müller. “There is something calming and reassuring in seeing these well-worn tropes reappear in fashion.”

Bourgine agrees. “The bourgeoise signifies stability, financial insouciance and a peaceful day-to-day life,” said the designer. “When times are difficult, it’s maybe not so surprising that fashion becomes nostalgic for anything quaint and leisurely, as perfectly incarnated by the bourgeoise.”

Despite hating the word, Catroux owes the bourgeoise one of her greatest friendships.

“Bourgeoise was at the core of my relationship with Yves — but not the way you would think,” said the model. “It was one of the reasons he was fascinated by me: he was a bourgeois, and I was decidedly not. I’ve always dressed like a man and done things my own way. I’m the exact opposite of the bourgeoise.”