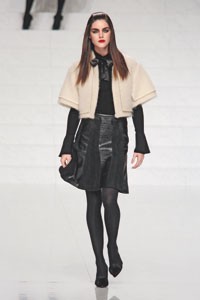 Valentino: When the elements are expertly mixed, Planet Valentino is a covetable destination. And, for fall, his elixir of lace, embroidery, bows and flounces blended together into the right glamorous magic — just the stuff to entrance the gals. Few designers identify as closely with their customers’ lifestyles and aspirations as Val. (Doesn’t he set one of the best jet-setting examples?) So Valentino transports you into a wealthy, rarified world. The trip this season began in black and white, as a gaggle of models gathered on an elevated stage before descending a steep flight of stairs in, say, a light black A-line skirt or slim wool trousers, all paired with a flirty blouson or a coat closed with a bow.

This was the designer at his controlled best, plying years of accumulated chic into beautiful, approachable clothes, from an ivory-and-black jacquard coat to a black suede skirt with crocodile insets. Rich, you say? Certainly, but a girl can’t live on black and white alone. So out came a green mohair jacket, an embroidered gold lace shirt or a sheer chiffon blouse in eggplant. Then the lights dimmed, and graffiti was projected onto the staircase to herald a plethora of sporty looks printed with colorful Jean-Michel Basquiat patterns. Of course, Valentino would never be complete without a dose of evening gear: silk georgette confections with embroidered tulle; a white chiffon skirt glimmering with black sequins, and dresses with tiers of lace ruffles were among the standouts. And four dresses in the designer’s signature red, either with ruffles, draped or with a satin shawl, brought the show to an appropriate end. How very Valentino.

Hermès: Jean Paul Gaultier hit all the right notes in his fifth outing for Hermès, making it easily his best collection for the house to date. Simply put, this is what Hermès should be: uberluxury served up with quiet elegance and just a soupçon of Parisian chic. It’s not surprising that Gaultier’s success comes during this season, since winter is the best time to truly flex the muscles of a luxury house with an aristocratic sporting heritage. The designer made ample use of an array of sumptuous materials meant for battling the bitterest of seasons. Fur and leather capes, some hooded, were layered on top of leather vests and cashmere knits. Necks were swallowed up in chunky, high-necked sweaters and scarves. Gaultier worked a refined, tailored silhouette with pleated, cuffed trousers; skirt suits, and belted coats. It was all delivered with a well-bred, classic chic befitting this venerable house. And while Hermès has no need for youthful flash, one could easily see a young starlet tossing on one of Gaultier’s adorable Fair Isle cardigans or his fox bomber with knit cuffs to grab her Starbucks. Gaultier is riding high this season.

Miu Miu: Miuccia Prada brought her fall Miu Miu collection from Milan to Paris — and out of the shadow of her signature brand — causing a scramble for scarce invitations to the Sunday show at Lapérouse, the famous Seine-side restaurant spread among the 14 tiny rooms of a 17th-century town house. And the collection itself was as appealingly recherché as the gilded old boite. Maintaining Miu Miu’s quirky character, Prada applied nostalgic dressmaking techniques to create the collection’s young — but sophisticated — look. A short fit- and-flare coat with a belled brocade miniskirt peeping out from beneath set the genteel tone. Prada sculpted swirled minidresses from iridescent taffetas and brocades, some overpainted with naïve graphics or classical urns. She crafted a masterful minidress from a mélange of spliced knits; showed a waxed leather bolero over a kicky leather mini, and, at her most relaxed, Prada sent out a felt bustier top over a slouchy T-shirt and riding breeches.

But even Prada’s most carefully constructed looks, like those prettily sculpted deb dresses, never turned uptight, reminding her audience of the brand’s distinctive charm. “When I am working on Miu Miu, [it] has to come immediately, instinctively, spontaneously with whatever is available at the moment,” the designer explained last week. “If I think three times, I stop.” That nonchalance came through loud and clear with this collection, as did Prada’s unmistakable instinct for chic.

John Galliano: Subtly infusing his Gothic inspirations with a little old-time Americana, John Galliano sent out a fall collection that played quiet country kin to the darkly Gothic collection he showed at Dior. And while he may have played it too quiet for some, unlike last season’s freewheeling, freakish parade, this time, Galliano seemed determined to banish any theatrics — save two rows of cardboard candelabras — from his runway.

While a country-western soundtrack featuring Joan Baez played, Galliano was busy flag-waving. He paired a softly tailored jacket with a full pinstriped skirt, its front panel patched with a piece of Old Glory, stars, stripes, golden fringe and all. Washed-out flag jackets and skinny flag-spliced jeans carried out the patriotic motif, while jackets cut like Civil War uniforms gave the collection a pulled-together look.

Shown under weathered leathers, a sheepskin bolero or full-cut officer’s coat, Galliano’s range of fine chiffon dresses made a delicate contrast, however. They came pared down to essentials, low-waisted and pure in breezy calico or Navajo-blanket prints. Others, in black or white, were knotted, twisted and casually draped. But what Galliano’s extremely laid-back look lacked was the high-voltage glamour and fabulous folly his fans adore. After all, the Galliano aficionado is not a country bumpkin.