NEW YORK — Every city needs its own Jeffrey or Colette — or at least a store that, for lack of a better description, compares itself to those two groundbreaking retailers. The former paved the way for a new fashion neighborhood in New... 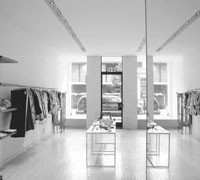 NEW YORK — Every city needs its own Jeffrey or Colette — or at least a store that, for lack of a better description, compares itself to those two groundbreaking retailers. The former paved the way for a new fashion neighborhood in New York’s Meatpacking District, while the latter set the standard for innovative independent boutiques in Paris and around the world.

This story first appeared in the July 9, 2004 issue of WWD. Subscribe Today.

Blake, which features designers from New York, Paris, Milan, London and Antwerp, has long claimed that mantle in Chicago, although co-owner Marilyn Blaszka blanches at the idea that Blake bears any resemblance to other stores no matter how hallowed.

Yet Blake is by all accounts original in parts of its designer roster — which includes Dries Van Noten, AF Vandevorst, Martin Margiela, Viktor & Rolf, Hussein Chalayan, Marni, Rochas, Balenciaga, DSquared and Rick Owens. Van Noten is the top-selling collection in the boutique — and its aversion to publicity.

Now Blaszka and her partner, Dominic Marcheschi, are blazing a trail again. The couple recently signed a lease for a 3,200-square-foot location at 212 West Chicago Avenue, in an area full of art galleries and home design shops. (A more apt comparison may be to Rei Kawakubo, who pioneered SoHo, here, for the fashion crowd in 1983.)

The couple plan to move the boutique in late summer from the founding location, a tiny storefront on Lincoln Avenue in trendy Lincoln Park.

“Blake was the ideal tenant for the building, which also houses an art gallery and shared creative space for artists and designers,” said Lorraine Adney, a broker at Baum Realty, who represented Blake.

The district north and east of Blake’s new Chicago Avenue digs is closer to Michigan Avenue and considered the Gold Coast shopping area.

Not all the stores in Blake’s new neighborhood survive. June Blaker, a boutique selling directional designers such as Comme des Garçons and Junya Watanabe, closed in 2001. Rents per square foot in the vicinity are in the high $30s, according to local brokers, while Lincoln Park spaces lease in the high $20s per square foot.

Obscurity is exactly what Blake’s owners wanted. At its current location, there’s no sign announcing the name of the store.

“Finding a new store wasn’t anything we planned,” said Blaszka. “We fell in love with the space and the building. We felt the physical space was appropriate and liked what was going on in the area. It isn’t putting us in the context of other fashion retailers.”

Blaszka said business is expected to increase by 25 percent at the new location, but declined to discuss sales volume.

Most retailers prefer to be in well-defined shopping areas. But several homegrown, high-brow designer stores have chosen to locate a step or two away from the heavy traffic, although this may be out of necessity, since rents in out-of-the-way places are lower than those of marquee addresses. There’s also a sense of prestige attached to being a destination store that attracts customers to its own turf.

Linda Dresner, for example, is on Park Avenue, off the beaten paths of Fifth and Madison Avenues. Janet Brown caters to directional Long Island residents and customers from Manhattan at her Port Washington, N.Y., boutique, which isn’t even on the main drag. Meanwhile, Kawakubo in 1998 set up shop in Chelsea prior to the mass exodus of art galleries from SoHo. Tomas Maier creative director of Bottega Veneta plans to open a store for his own collection in Sunset Harbor on Biscayne Bay near, but not too near Miami Beach.

Blake has kept a low profile since its inception 20 years ago. Before Blake, Marcheschi and Blaszka had a store that sold pristinely restored antique clothing from the Victorian era through the Forties.

Chicago does not lack for designer apparel with Barneys New York, Neiman Marcus, Ikram, Ultimo, and the boutiques of Stella McCartney, Alexander McQueen and others.

Blaszka makes her job sound like a political mission. “It’s a competitive world, and we have to compete and fight for what we believe in,” she said. “We’re very stubborn people, and we don’t fall down. We stay very focused on what we’re doing.”