Several retailers applauded the convenience, size and location of the... 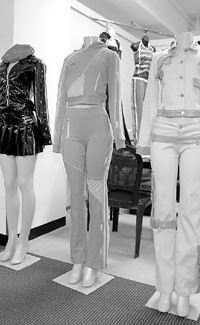 Several retailers applauded the convenience, size and location of the three-day show that ended June 25. Pulse, which covered about 54,000 square feet on the eighth floor of Chicago’s Merchandise Mart and focused on hip-hop, urban and extreme sports fashions, featured companies such as Rocawear, Shady Ltd., Azzuré, Pelle Pelle and Phat Farm.

Tyrone Dozier, owner of TCT Casual Gear in Detroit, said, “A lot of the top lines were here. The sales reps were accessible. It’s clean and not real crowded.”

The lack of constant crowds, however, disappointed some vendors. “There is not as much foot traffic as I thought from the amount of mailing they said they did,” said Chris Murphy, Midwest sales representative for Parasuco Jeans.

Although business slowed after the first day, Janet Eriks, a sales representative from Taheri, said she was pleased with the exposure.

“Pulse has been great,” said Eriks, noting that the women’s wear line featuring bold print polyester and spandex off-the-shoulder tops had opened eight accounts. “We’re really not hip-hop, but people are looking for our look.”

Because the market’s second day lagged, Eriks said she would have to weigh the pros and cons of returning to Pulse’s second show on Sept. 8-10.

Dozier, meanwhile, who said he ordered more than expected at the market, selected jeans from Pelle Pelle, Pepe, Azzuré and Indigo Red, and French-cuff shirts from Nero and Pelle Pelle.

The Detroit retailer plans to return to Pulse in September, when he predicts the crowds will be larger, “once they do more advertising,” he said.

Parkey also did most of his buying from big-name urbanwear brands, ordering clubwear and jogging suits from Baby Phat, basic and velour sweatsuits and button-up shirts from Phat Farm, along with items from Drunknmunky and Meezan Artcouture.

Parkey said his clientele, generally men and some women ages 14 to 34, come looking for the latest styles from the latest brands. Overall, Parkey stuck to his buying budget, but predicts the show will grow in size and scope.

“It was absolutely fantastic,” she said. “We had great attendance. We had retailers from New Jersey and California. A first show is a tough thing, but we had every major brand there. It was everything we expected and more.”

McCullough did not disclose the number of retailers who attended, but estimated about 175 exhibitors sold close to 800 or 900 lines.

Dozier, who was generally pleased with the selection, said he was disappointed Enyce was not represented when marketing materials indicated the company would.

McCullough said Enyce had planned to attend Pulse but did not have samples ready. McCullough also expects the September show to be larger because of its better timing, with more companies releasing spring collections.

McCullough said organizers plan to attract more vendors in categories such as board sports, urban dress-up, better denim and streetwear.