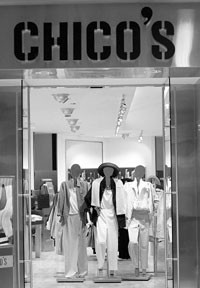 NEW YORK — Intimate apparel is among the most ambitious initiatives at Chico’s FAS and is getting its own chain this summer, according to Scott Edmonds, president and chief executive officer of the Fort Myers, Fla.-based retailer.

“I’m going to help them with all facets of the [intimates] business, from product through the supply chain, and offer them advice whenever I can when there might be something missing,” said Nesbit. “They’ve done a terrific job from what I can see.”

Nesbit said the target consumer will be the “Victoria’s Secret graduate,” with the new stores offering one-stop shopping and a full range of intimate apparel categories, including bras, sleepwear, robes, at-homewear and basic and fashion panties.

Edmonds said, “I was flattered when Chuck reached out to me and said he was really impressed with this initiative. He said ‘I think you guys are really on to something,’ and I told him with his background at Sara Lee, just come in and punch holes into anything.”

Regarding the intimate apparel launch, Edmonds said, “We started this initiative 18 months ago. The reason we feel we need to do it is we are the hottest brand for the Baby Boomer woman right now. As of Feb. 1, 2003, Chico’s has been doing net sales per square foot of $924.”

Interestingly, Edmonds said the company “does not see the Soma by Chico’s name as a brand extension, because it’s targeted to five million women who already are on our database.”

As for the Soma name, which means body in Greek, Edmonds said, “It’s very difficult to come up with intellectual rights on any name. We wanted it to reflect Chico’s, look at how it would look on a label or a store sign and the message it would give consumers. Verna Gibson, who was president of The Limited Stores in the Nineties and who currently serves on our board, came up with the name.”

Assessing Chico’s image, Edmonds said “our entire product development team” reflects the Chico’s consumer profile, Baby Boomers in their Fifties who want fashion, as well as comfort. However, they particularly want personalized service when it comes to buying intimate apparel, an apparel category that industry experts typically describe as an “emotional purchase.”

“These women were frustrated with the intimate apparel experience,” Edmonds said. “The idea of Chico’s doing intimate apparel came up with a roundtable discussion of the growth of the brand. As we gained traction with the brand, we looked at our debt-free balance sheet with $120 cash flow and thought, what’s the next great product for Chico’s: intimate apparel.”

Edmonds’ “bridge to a billion” strategy has included acquisitions of new businesses and expansion of existing operations. The company brought 179 stores into the fold this year, 122 of which are White House/Black Market specialty units. The company also operates 23 Chico’s outlet stores, and franchisees own and operate 12 Chico’s stores.