ATLANTA — One look at Pazo — the plasma video wall with sexy models in low-rise jeans, the hip minimalist interior showcasing the trendiest looks — would never invite comparisons to Chico’s and its baby-boomer... 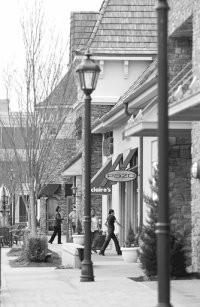 ATLANTA — One look at Pazo — the plasma video wall with sexy models in low-rise jeans, the hip minimalist interior showcasing the trendiest looks — would never invite comparisons to Chico’s and its baby-boomer customer.

This story first appeared in the March 10, 2003 issue of WWD. Subscribe Today.

The departure is intentional. This new retail experiment by Chico’s targets an entirely different customer, one who shops Express, Bebe or Zara. Three Pazo stores, in Atlanta, Memphis, Tenn. and Scottsdale, Ariz. opened Wednesday. A total of 10 are planned by the end of March — including another Atlanta unit, stores in Boca Raton, Fla., Houston and Dallas, Tex. and Mission Viejo, Calif.—in both malls and lifestyle centers.

Pazo is owned and operated by Fort Myers-based Chico’s, but positioned as a separate entity, with a separate merchandise and product development team. After more than a year of research, Chico’s identified opportunity in a target customer, 25-35 years old, with a $40,000-plus household income.

A trendy, fashion-follower, she devours magazines and other media, wants designer looks at sharp prices, and wants it fast. With all in-house merchandise, groups arrive daily to satisfy the customer’s desire for constant newness. Apparel is 85 percent trendy and fashion-forward, with 15 percent in key items of mostly tops and denim.

“We’re going for close-to-runway fashion,” said Barry Shapiro, senior vice president, Pazo. “We can translate designer fashion right away. We can interpret a raw silk asymetrical skirt, by a designer like Marc Jacobs, and have it stores the same month it appears in Vogue. The difference is, ours is $49, not $800, and of course, it’s not raw silk.” Prices average $40, with a range of $14 to $118.

With apparel at 85 percent of inventory, Pazo also offers shoes, accessories and intimate apparel. The mix allows wardrobing and multiple sales, similar to Chico’s formula, and gives Pazo an edge over other fashion stores, said officials.

“Our research told us this customer may go one place for great pants, another for T-shirts, and still another for shoes,” said Jayme Alemechko, senior merchant. “There’s no one place where customers say they can find it all at the same time.”

Stores average 2,600 square feet. Like product, store design bears little relation to Chico’s. Although the units vary slightly, according to space restrictions, most have a uniform ambience. Minimalist neutral tones, Terrazzo tile floors, tiny crystal chandeliers and halogen track lights make stores appear bright, clean and contemporary. Clothing is hung around the perimeter, and folded on chrome, glass and wood shelves in the store’s center. Shoes and accessories are displayed in lighted recessed areas on the wall.

A plasma screen video wall in the back of the store continuously runs video, produced in-house of models cavorting in the latest Pazo fashions and lifestyle, designed to reinforce the Pazo brand. The name, Pazo, was originally intended as “Pazzo”, Italian slang for “cool,” but officials had to drop a “z” when they found the name was already copyrighted.

“Chico’s credibility and clout allows us to get good deals and small runs, as little as 180 pieces, that no small operation starting out could do,” said Shapiro. “That will lead to great margin opportunities now, and down the road.” Chico’s has 378 stores in 41 states, with sales of around $500 million.

With no major media advertising to begin, Pazo is building a mailing list for its frequent customer club. Similar to Chico’s Passport Program, Club Pazo will reward customers with discounts, but its primary focus is brand-building and gaining customer feedback. A Pazo “Lookbook” mailer, and a web site, will launch at the end of March, with fashion editorial, but no selling as of yet. In-store fashion shows and other events are also planned for members.

Sales associates each participate in week-long training programs and continue training after hiring with weekly meetings. Like Chico’s, stores are heavily staffed, with up to eight associates per store working on weekend days. Like Chico’s, Pazo’s sales philosophy encourages befriending and building trust with customers, in a party-like atmosphere.

Pro-forma first-year sales are projected at $1.6 million a store, or around $500 per square foot, though estimates are conservative, said Shapiro, depending on the traffic each individual space draws.

Between four and six more stores are planned to open in the fall, but the rollout after that is intentionally vague.

“We’re going slowly and testing this concept carefully, said Shapiro. “We’ll know more after a year of listening to what our customers tell us.”