The Italian children’s wear industry is prepared for 2013 with a positive attitude. 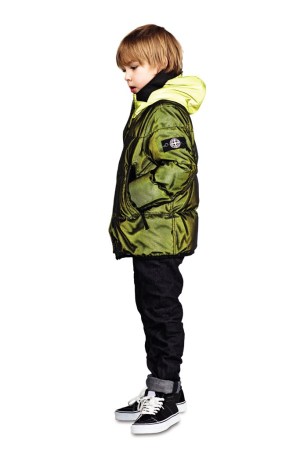 MILAN — The Italian children’s wear industry is prepared for 2013 with a positive attitude, despite euro zone woes and the slowdown of the fashion business in general, which, according to the Fashion Economic Trends study published by the nation’s Chamber of Fashion, was expected to close 5.6 percent down in 2012 against 2011.

“The children’s business at our flagship store on Piazza del Duomo in Milan is performing very well and this year, thanks to the new layout and areas, we are more than satisfied with the results,” said Cinzia Baldelli, head of children’s wear at La Rinascente department store, revealing that the division closed 2012 up 7 percent compared with 2011. “With these premises, we have very ambitious goals for 2013.”

In 2012, La Rinascente revamped its area dedicated to children’s wear, introducing hot labels, including a Moncler corner, to the already high-end selection, and unveiled a multibrand footwear space, “which is performing very well,” said Baldelli, who also pointed to baby clothing and accessories as among the most successful categories at the store.

Stone Island president and creative director Carlo Rivetti shared similar optimism about the results of his company’s children’s wear division, which was launched in 2005.

“Children’s wear is performing very well and it’s growing significantly, led by the success of our men’s line,” he said. (Stone Island does not have a women’s line). In 2012, sales of Stone Island Junior were up more than 20 percent from 2011.

Italy represents the main market for Stone Island Junior, followed by Russia. Rivetti attributes this to the fact that “our products are perfect for Russia’s extremely cold weather.”

In keeping with the company’s core business, the children’s line features pieces for boys ages two to 14, and shows the same high-tech details as the adult range. The fall 2013 collection, which will be presented at Pitti Bimbo, includes a wide range of dyed down jackets, a luxury sheepskin coat and Stone Island’s signature Reflective jackets, featuring also a new treatment combining fishnet with the reflective fabric.

“In 2012, Moschino Baby, Kid and Teen increased its distribution outside Italy,” said Moschino general director Alessandro Varisco, who added that international markets, in particular the Middle East, Far East, Russia and Europe, account for 70 percent of the lines’ total business.

In addition, Varisco said the strategy for 2013 includes the opening of a number of in-store shops and corners. For example, the company will introduce its children’s lines in Moschino flagships in Amman, Jordan and Abu Dhabi, while corners will be unveiled in Doha, Qatar, and Ho Chi Minh City, Vietnam.

The three-day international children’s wear trade show Pitti Bimbo, which begins on Thursday in Florence, will offer global companies the first business indicators of the year ahead.

Fair organizers expect about 8,000 buyers to attend the show, with 34 percent of them coming from outside Italy — especially from Russia, Spain, Germany and Turkey.

“Surely, we are more concerned about the Italian market,” said Pitti Immagine chief executive officer Raffaello Napoleone. “Taking a look at the holiday sales and analyzing the beginning of the discounting season, it’s evident that Europe is going through a particularly difficult moment. But, even if we know it will be a complex season because of economic uncertainties, we expect very good traffic at the fair.”