Children’s Preview: Ones to Watch

New lines on the scene. 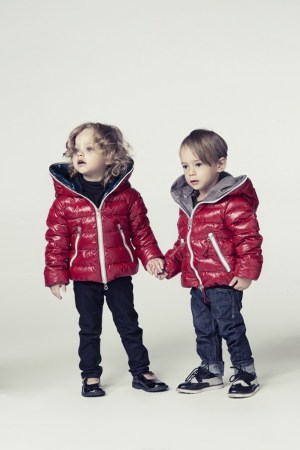 Duvetica has embraced a digital-only strategy to make its debut in the children’s wear arena.

Founded in 2004 in Venice, the company, which specializes in luxury men’s and women’s down jackets, has recently launched Duvetica Boy & Girl for children and kids in the 2-to-12 age range.

The boys’ and girls’ collection utilizes lightweight French and Japanese nylons in its shells, and the jackets are padded with high-end French goose down. The children’s line is sold exclusively online at the Duvetica Boy & Girls pop-up-shop, which is accessible from both the company’s own Web site and e-tailer Yoox.com’s children’s wear section. Prices range from 200 euros, or $267 at current exchange, to 300 euros, or $400.

The wide offering includes classic down jackets and vests for younger children, and for older kids, Duvetica’s design team infused the range with a sportier mood. For example, the girls’ line features an elongated and belted feminine style, while boys can choose among many jackets and gilets with appliquéd pockets and double stripes on the hood.

“Duvetica Boy & Girl’s main goal is to transfer the same qualitative and stylistic values of the adult line, targeting an international audience,” said Duvetica cofounder Stefano Rovoletto, who added that, since its debut, the line has been particularly well received in Italy, the U.S., Russia and Germany.

Duvetica, which generated sales of about 30 million euros, or $39 million at average exchange, in 2011, operates four flagships, in Milan, Tokyo, Kitzbühel, Austria, and Courmayeur, Italy, selling the adult range.

NEXT: Quis Quis and From the World >>

QUIS QUIS and FROM THE WORLD

Stefano Cavalleri is gearing up to introduce two kids lines, Quis Quis and From the World, at the international children’s wear trade show Pitti Bimbo in Florence with a runway show on Jan. 17 at 5 p.m.

Last June, the designer, a native of Bergamo, Italy, left his role as creative director of I Pinco Pallino, the successful high-end children’s brand that he founded in the early Eighties and that was acquired by Italian private equity fund Opera in 2010.

The two new collections will be produced and distributed by Mafrat, the Putignano, Apulia, Italy-based company that already manufactures the children’s lines of labels including Ferrari, Laura Biagiotti, Scervino, Gas and RefrigiWear, among others. Andrea Montelpare SpA, which counts Simonetta, John Galliano, Diesel and Cesare Paciotti among its clients, will produce footwear.

“Launching two brands at the same time is ambitious, but we are cautious and we are doing things step-by-step,” Cavalleri said. “We are conscious of the major slowdown in Italy and Europe, so we focused on products that can also appeal to both the United Arab Emirates and the Russian market.”

The luxury Quis Quis brand takes its name from graffiti at the Pompeii archeological site reading “Quisquis amat valeat” [“Whoever loves let him be well.”] It consists of sophisticated and feminine princesslike clothes for girls ages 2 to 14. Three main themes run through the fall collection, which includes a range of dresses, as well as sweaters matched with practical pants. There’s a colorful circus-inspired theme, a more elegant style featuring shiny, glamorous fabrics, and a romantic motif focused on the use of cross-stitching. Completely made in Italy, the line also includes some baby pieces and 20 styles for boys.

“A trip around the world” is how Cavalleri described the new From the World label, which is centered on a melting pot of nations and styles. The biggest part of the fall range is dedicated to girls ages 2 to 16, but there also some outfits for boys. The pieces in the collection feature labels of different colors indicating the country where each item has been manufactured. Touting the various artisanal skills from regions around the world, production of the collection is global. For example, the embroidered pieces were made in Jaipur, India, the slippers in Marrakech and the cashmere sweaters in Mongolia.

Italian high-end outerwear company Herno is introducing Herno Kids at Pitti Bimbo. According to Herno chief executive officer Claudio Marenzi, the kids’ line “is perfectly in line with the adult collections,” and includes boys’ and girls’ clothing for kids ages 4 to 14.

“The launch of Herno Kids represents a natural evolution of the brand, and I think it will also help to consolidate the image of the label,” said Marenzi, adding that in the last few years the company fielded many requests for children’s pieces coming from retailers and consumers. “It also gives us the chance to start educating our future adult clients from childhood.”

Retail prices are about 250 euros, or $333 at current exchange. Marenzi noted that Italy, Germany, Japan — which is the company’s main market — and the U.S. are the markets with the greatest potential for the Herno children’s line.

“With the market suffering a lot from the economic crisis,” Marenzi said, “I have the feeling that the children’s sector is performing a bit better because parents tend to spend more for their kids than for themselves.”