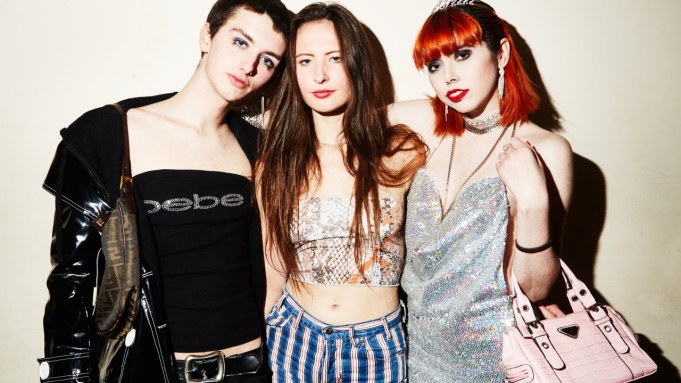 For the last decade on cold, winter Friday nights in New York City’s Financial District — long after the neighborhood’s army of suits and City Hall workers had packed up their briefcases for the weekend — a second wind would hit Lower Broadway.

While unknown to many, China Chalet was legend to an influential few — a carpeted Chinese restaurant by day and underground nightlife space by weekend night that was frequented by the kinds of New York counterculture communities whose style of dress is observed, exploited and commercialized by the larger fashion industry. What had been founded as a Cantonese establishment and banquet hall in 1975 organically became a haven for all walks of youth culture — with its owner Keith Ng renting the space for a considerably affordable fee, welcoming party organizers from a broad spectrum of sexual identities, ethnicities and economic means.

In a time pre-pandemic when people were still allowed to congregate en-masse, China Chalet was the central gathering place for New York designers, stylists, gallerists, artists and personalities. So it was a shock this past weekend when news broke that the 45-year-old institution was closing — another casualty of the coronavirus’ economic wreckage. China Chalet became a trending topic on Twitter and will, by many accounts, be remembered as the Studio 54 of the “BC” — or before coronavirus — era.

It took Ng, a Cantonese immigrant, to set the stage for a safe space party culture. “I don’t think you will find that many people out there gutsy and ballsy enough to allow their space to become what China Chalet was,” Opening Ceremony cofounder Humberto Leon said of Ng.

Boldface names were often in attendance, including Cardi B, Timothée Chalamet, Ashley and Mary-Kate Olsen and Kiko Mizuhara. Famous or not, it was the parties’ mix of crowds and sense of sanctuary — particularly for those who felt disoriented in the aftermath of Donald J. Trump’s election — that will remain in memory.

“Even though a good party at China Chalet was thrown by organizations geared toward a specific group of people, it was a mix there. It’s one of those cross-generational places that will go down in New York history as a place where everyone gathered,” said Arthur Soleimanpour, founder of community-driven media platform Parks Department.

Come nighttime, the restaurant’s cocktail lounge and pink, fluorescent-lit dining room would fill with all walks of city life and a thick cloud of cigarette smoke — sending revelers home with an ashtray stench that could only be removed by the most abrasive of shampoos. Without ventilation, the restaurant’s parquet-floor banquet hall, its makeshift dance floor, clocked August subway station temperatures and humidity in the dead of winter.

“These kids put on the grandest of looks to stand in a stuffy, smoke-infested room. Not even your dry cleaner could probably take that out,” Raul Lopez, founder of Luar, said of the scene there. By 11 the next morning, the space had cleared out and China Chalet’s food was again available for order delivery platforms like Seamless, their sesame chicken reaching customers likely clueless of what had occurred there just hours before.

Ng declined multiple requests for an interview but humbly relayed through frequent party organizer Alexander Kellogg: “China Chalet is one of the many businesses affected by the national lockdown. I think we will let it go….We were just one of the many impacted.” In addition to the Financial District outpost, Ng also ran restaurants on the Upper East Side, Staten Island and was planning a jazz bar concept in Midtown — all of which have ceased operation.

Leon had held Opening Ceremony’s annual holiday parties at China Chalet since 2003 and would frequent events there as well. “I think it will go down as a space that will personify a period. It’s pretty sad because as I think about what place I would want to go right after coronavirus, China Chalet was on that list of places to have fun and see something familiar,” he said.

“The amount of people talking about it now and making memes about this Chinese restaurant in the Financial District is proof [of its longevity],” said Kellogg, who brokered party contracts on Ng’s behalf, including events for Vogue and Red Bull. “I don’t think people in the Seventies expected Studio 54 to be remembered as it was and I think China Chalet will be the same.”

While pop-up events occurred at China Chalet throughout the year — increasingly by big-ticket hosts like Converse and Highsnobiety as the space’s reputation grew — it was Dese Escobar’s reoccurring “Glam” party, sometimes held in collaboration with Vaquera and Telfar, as well as Ty Sunderland’s monthly “Heaven on Earth” event for the LGBTQ community, that cemented China Chalet status as a counterculture Shangri-La.

While acceptance was key to China Chalet’s status as a hot spot for the anti-establishment, so were the clothes worn there. Lopez labeled weekend partygoers there as “beautiful swans.”

“There was a mirrored hallway that was like a runway, people would sit down and look at each another. You had the opportunity to be seen so people saw it as an opportunity to get dressed up and keep fashion relevant,” Escobar recalled. “It’s where a lot of designers came to be inspired and cast models or take some notes. It was a place where people knew they could find young, fresh talent and inspiration.”

Communities have been pushed to mostly online-only contact during the COVID-19 crisis. But during its run, China Chalet was a sort of intermediary between social media and the real world — a common ground where virtual friends and foes could see each other in person, often meeting for the first time.

“For me, it represented a lot of Internet culture,” Sunderland said of his parties. “The parties became a meeting place for people to meet others with similar ideals and aesthetics — I heard so many cases like, ‘Oh we have followed each other on Twitter for five years and met at your party.’”

“It was very much about being seen and being seen in real life probably for the first time by a lot of people who only know you from Instagram. What you were wearing was always important,” Vaquera’s designers Patric DiCaprio, Claire Sullivan and Bryn Taubensee recalled of their time there over e-mail.

“It felt like a free space where rules didn’t apply. You could smoke inside, approach your crush, wear what you want. So in a way it was testing ground for new ideas: everyone was wasted and eager to see each other and to try something new. It was like this safe space to just go for it,” they added.

Leon summarized: “It always felt underground and somewhat gritty. Anything that comes after this would be a wannabe version.”