The quotas that ruled the sourcing world for three decades are gone, but a cloud of uncertainty remains over China's apparel industry. 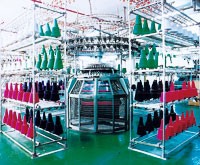 HONG KONG — The quotas that ruled the sourcing world for the past three decades are gone, but a cloud of uncertainty remains over China’s apparel industry.

The dropping of garment and fabric quotas Jan. 1 among World Trade Organization members was supposed to usher in an era of free trade and competition. But rather than reveling in their new freedom, Chinese executives are fretting over the possibility that the U.S. or European Union could impose safeguard quotas on China. They’re also still figuring out what China’s new export tariffs will mean to their operations and wondering if other nations will act quickly to use antidumping measures or other legal roadblocks to restrain China’s growth.

Henry Tan, chief executive officer at Luen Thai Holdings Ltd., a $500 million apparel manufacturer with factories in China, said, “There has been a lot of concern among our customers regarding the possibility of safeguard action against China.”

China’s WTO accession agreement allowed other members of the trade body to place temporary limits on Chinese apparel and textile shipments if they caused “market disruption” in the importing country. The safeguard quotas are category-specific and can be applied for one year at a time through 2008. They’re already the subject of an ongoing U.S. court fight — a coalition of domestic manufacturers last year petitioned the government to impose safeguard quotas at the start of the year to hold off an expected surge of Chinese imports.

Among Hong Kong executives, the main question regarding the safeguard quotas is not if they will be imposed — which many here regard as a given — but when. Until they get a clear signal as to what the U.S. and EU plan to do, they said most buyers are holding off on boosting their business in China.

“All is very muddied,” said Steve Feniger, ceo of Linmark, a sourcing firm that caters to about 30 customers and has links to 1,000 factories in China for hard and soft goods. “There has been little rush by major retailers or brand owners into China from the U.S. so far, not surprisingly.”

China shipped $14.56 billion worth of textiles and apparel to the U.S. in 2004, a 25.4 percent increase from the prior-year period, which gave it a 17.6 percent share of the import market, according to U.S. Commerce Department data. Commerce is not expected to release January import figures — the first that will show how China performed after quotas were lifted — until mid-March.

While it remains unclear what, if any, steps the U.S. or other major importers will take to limit China’s growth, Beijing late last year took the unusual step of imposing an export tariff on some categories of apparel and textiles. It described the duties, which range from 2.4 cents to 3.6 cents per item, or per set in the case of suits, as an effort to encourage Chinese manufacturers to concentrate their efforts on higher-quality, higher-priced goods.

In addition to encouraging local manufacturers to focus on higher-priced garments — for which the duties would represent a tiny fraction of the price — the tariff also serves as a revenue source for the Chinese government and serves as a way to keep track of exports.

“It’s not fully understood or applied yet,” he said. “That’s an issue.”

Sheridan said some of the hiccups he’s run into include factories that don’t understand the paperwork or fail to have it ready in time, which delays the delivery. Lark employs 90 people in eight countries worldwide.

All the uncertainties mean that business in China so far hasn’t been greatly affected by the end of quotas, executives said.

Linmark’s Feniger described the first weeks of 2005 as bringing “No big bang, just a whimper.” He said Linmark has seen “a mild upswing in sales” so far this year and attributed that to anticipation relating to the quota elimination, a drop in prices in Southeast Asia — where manufacturers were scurrying to position themselves against China — and a drop in regional cotton prices.

He said he expected China’s role in the apparel industry to continue to grow, while sourcing in the rest of Southeast Asia and sub-Saharan Africa would decline.

In preparation for the end of quota, Linmark last year closed offices in Singapore and Manila while expanding its operations in China, opening offices in Fuzhou and Dongguan. This year it plans to open more China offices, in Dalian and Wuhan, and is considering three smaller “spoke” offices in cities yet to be determined.

Luen Thai, which unlike Linmark operates its own factories rather than relying on contract facilities, is also building up its presence in China and its special administrative regions.

The company has set up a small factory in Hong Kong, where about 20 staffers work on final assembly of goods. This month, Luen Thai is opening a factory in Macau, which will employ from 100 to 200 workers.

In China proper, late last year the company opened a 323,000-square-foot factory in Dongguan, which currently employs 2,000 people and is ramping up to 3,500. “This facility will serve as one-stop shop for buyers, offering fabric, trim and garments under one roof,” Tan said.

“The company has begun construction of a second 300,000-square-foot facility in Dongguan and is contemplating a third, depending on demand and trade barriers,” Tan said. He’s also looking into a building at Qingyuan, China.

Tan said customers are prepared to put more production in China, particularly when it becomes clear what will happen on the safeguard issue. “Most are waiting for ‘the dust to settle’ before making any big moves,” he said, “but there are lots of discussions going on now.”

Gordon Yen, executive director of Fountain Set (Holdings) Ltd., a leading knitter based in Jiangsu, China, said his company also is holding off to see how the safeguard drama plays out before making any expansion moves.

Over the long run, some executives said the end of the quota system could bring major changes to the competitive field in China. That’s largely because a limited number of companies had access to quota rights, which turned the rights themselves into a valuable commodity. Taking away quota rights means that customers will be free to buy from any supplier they choose, executives reasoned.

“A lot of companies…may have been a bit lazy,” said Lark’s Sheridan, noting that access to quota rights more or less guaranteed orders in recent years.

Today, he said, smaller trading companies “can be a little more competitive.”

Lark has made adjustments to stay ahead in this market by diversifying. It’s entered into retail distribution, purchased the Canadian brands ID and Identify in June, and is bringing in designers and developers.

Access to quotas became a significant part of pricing in China, representing as much as half the cost of a garment. With that factored out, Sheridan said Lark is able to shift its orders into better quality factories without significantly changing prices.

Linmark’s Feniger predicted sourcing companies will continue to face surprises on the trade front for the next few years.

Vietnam is not a WTO member and the U.S. has maintained import quotas on it. That development makes Vietnam a more appealing sourcing platform for goods destined for Canada than for the U.S.

Feniger suggested the company would face more such shifts in the coming months: “These sudden changes need Linmark to be flexible, swift to react, seize competitive advantage, or fail to capitalize on the opportunities.”