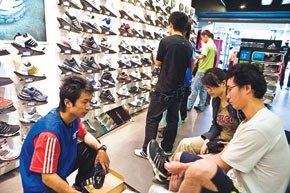 CHENGDU, China — The devastating earthquake that shattered the countryside near this thriving peg of China’s western development has ground business here to a slow trickle, with continuing fears about aftershocks keeping citizens cautious.

Across Chengdu, the capital of Sichuan province and a major retail hub, retailers have closed stores and reduced hours intermittently since the 7.9-magnitude quake on May 12. The instability underlines a buzz of anxiety that runs through the city now, as those who experienced the quake brace for more aftershocks. Hundreds continue to sleep outside at night.

One thing that was selling: “I [heart] China” T-shirts, originally printed after riots in Tibet and international outcry over the Chinese government crackdown there stirred up strong nationalism across the country.

Some 70,000 people are confirmed dead or missing from the earthquake, but only 1,000 of those deaths were in Chengdu. The rest were in largely poor outlying farming regions, where residents had little wealth to begin with and now have nothing. In Chengdu, the pitch of anxiety one week after the quake illustrates just how massive it must have been. Residents describe confusion and panic as the ground heaved, and walls and windows shook and cracked.

“We didn’t know what it was, so we ran outside with everyone else,” recalled Guo Qing, who works in a shoe shop near the Wangfujing department store, a major walking mall lined with stores. “I’m still a little bit afraid to come to work.”

Most businesses shut down in Chengdu for at least a day after the quake but were back to normal by the weekend. Then, on Tuesday, clerks said they shut the doors again as state-run media warned of a potential major aftershock that never materialized.

“Since the earthquake, there are only a few people coming in the shop each day,” said a clerk who wouldn’t give her name at a Dior boutique in central Chengdu.

The mall that houses Dior, Louis Vuitton, Versace and Fendi was virtually deserted this week, and several shops closed for a day in Tuesday’s aftershock panic. Agnes Wong, manager of the Louis Vuitton shop, declined to comment about the quake or its effect on business, saying all questions had to go through the company’s public relations office in Shanghai.

But it was apparent the disaster, and anxiety about more earthquakes, have heavily damaged Chengdu’s retail atmosphere. In Top Sports, a chain store that sells both Nike and Adidas shoes and sportswear in separate adjoining units, clerks said business has been slashed to a fraction of normal. Typically, the shop has sales of about $6,000 a day, but that number has been down to a few hundred dollars since the earthquake, said Deng Hao, a clerk at the store.

On the day after the earthquake, he noted with a wry laugh, things were booming.

“We actually did really well in the first days because people ran outside without their shoes when the earthquake hit,” he said.

Most said they expected retail to rebound within a few weeks, but shoppers were few in the main walking mall and caution ran high.

The total economic impact of the earthquake on China is as yet unknown but will undoubtedly be huge. Direct losses to industrial production and damaged power grids total more than $10 billion thus far, officials said this week.

Aid has poured into China since the earthquake. Each day, new benefits and charity drives pick up momentum. Designer Dorian Ho planned to hold a private sale from Wednesday to Friday to raise money for OxFam’s China earthquake relief efforts. Meanwhile, Hong-Kong-based Global Sources said it would raise and donate up to $150,000 for relief efforts.

Economists have noted Sichuan province accounts for just 3 to 4 percent of the country’s total gross domestic product, but it is a major source of migrant labor — those who staff the factories in Guangzhou and other areas. In addition, rebuilding hundreds of towns and villages will exact a high cost, but economists say China should be able to absorb that since it has massive cash reserves.

The cost will be highest in the countryside around Chengdu, where hundreds of towns and villages were damaged or destroyed. Formerly picturesque mountain villages around northern Sichuan, once popular with tourists, are now decimated ghost towns, with survivors flooding into refugee camps in stadiums, public parks and squares in safer areas away from the mountains.

An estimated five million people are now homeless in three provinces affected by the earthquake, with tents set up for only about 200,000. The government is scrambling to figure out how to house and feed them in sanitary conditions as it builds temporary housing in the worst-hit areas first. The crisis-mode attention to places like Beichuan, where the official death toll is 7,000 and expected to rise, has left refugees in places with less damage to fend for themselves for now.

“We have no jobs, no money, and now no homes,” said Wang Hongying, who had set up a crude tarp-covered camp with her family on the median of a highway that leads to Shifang, another quake-devastated county north of Chengdu.