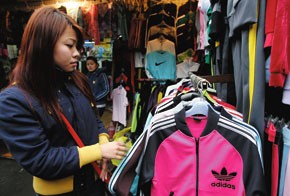 The top 10 factors young Chinese consumers consider when buying merchandise in a store.

Last year, retail sales in China rose by 17 percent to $1.2 trillion — further evidence, if any was needed, that it’s a market with unprecedented growth. The Bergström Report, which analyzes the lifestyles and consumerism of Chinese youth ages 15 to 25, has released the top factors young shoppers look for when buying a product. “The goal of this report is to help Chinese youth be better understood by developers and marketers,” said Mary Bergstrom. Consumers are looking for products that are authentic, which will help them demonstrate their status, she added. “Status is critical in China. And they’re buying high-end items. They live at home and are willing to save to buy things that will give them a higher social status amongst their peers.”

1. QUALITY
Amount of respondents who said they consider this a factor when shopping: 77 percent
“People don’t necessarily associate young shoppers as being quality conscious,” said Bergstrom, founder of Bergström Trends and author of the Bergström Report. “But in China, this has to do with the country’s history, where families are conscious of what they buy and do not want to be wasteful.” She also pointed out that for retailers, the message here is that backing their products is essential. “China’s youth may be internationally savvy, but they still have elements that are very Chinese that still speak to their culture,” Bergstrom added.

2. PROMOTIONS
69 percent
“This factor is what I consider to be uniquely Chinese,” said Bergstrom. “We’re really talking about daily large events that happen on the street or in shopping centers that are brand- or product-specific. From runway fashion shows to spokesmodels to contests, there are all sorts of creative ways to get a customer attached to a brand.” She cited “the perfect storm” for a promotion in China: an event that draws a crowd, there’s a beneficial price reduction and it’s only for a limited time. “In places such as Shanghai, the Grand Gateway is loaded with daily promotions from several brands.” The mall itself has its fair share of high rollers in terms of retail: The Hong Kong Trade Development Council reported that in October 2006, “five brands — Paul & Shark, Hugo Boss, Versace, DKNY and Diesel — opened shops on the first floor of Grand Gateway in Shanghai.”

3. PRICE
59 percent
Though quality is of course the most important factor, price isn’t something China’s youngsters overlook. “Typically, most youth are going to be price-sensitive because they only have so much to spend,” said Bergstrom. “But the unique aspect to this factor is that, even though they do need to budget responsibly, young consumers will often tend to save up their allowances, so they can splurge on a more expensive item.” Wal-Mart, which boasts nearly 100 locations in more than 50 cities across China, is one of the most price-sensitive, of course.

4. SERVICE
56 percent
“This is another big difference between the U.S. and China,” Bergstrom pointed out. “In China, good service is more a sign of showing respect and welcoming someone. It’s all about being a good host.” For young consumers, she pointed out, this is relevant because they are offended if a salesperson doesn’t show respect, pay attention or welcome them. Conversely, they’re impressed if they receive good service, and they will remember that experience. “Good service is definitely more likely if you are shopping from a franchise store or a popular brand, such as Li Ning or ANTA stores [both are two of China’s most well-known apparel and footwear retailers], versus a no-name shop,” Bergstrom said.

5. SALESPEOPLE
41 percent
Bergstrom noted that, while many sales jobs in the U.S. are commission-based and have that financial incentive, China is not typically the same structure. In addition, in Chinese culture, it is simply expected that salespeople are good hosts and provide a good experience for their customers. Companies also have motivational programs, such as pep talks and exercise or dance breaks daily, in place for staff members to keep them happy, for example. “This might seem strange to people in the U.S., but this is a huge part of the culture in China,” said Bergstrom. “Salespeople are motivated and creative, and this is especially important when catering to young consumers. They expect to be treated well — if you don’t treat young shoppers seriously, they will share that experience with others, so that store faces the possibility of getting no business from their friends.”

6. CLEANLINESS
35 percent
“Youth are becoming more vocal about how they want to experience things,” said Bergstrom. “But what’s funny to me is that there are plenty of students who don’t mind eating at a run-down noodle shop near campus, yet those same people would tell you that cleanliness is a ‘must’ wherever they are shopping. For them, it’s all about the in-store experience. Shopping at a run-down store doesn’t allow the customer the same comfortable experience that it would in a cleaner store.” She pointed out that smaller, local shops run a greater challenge of maintaining a clean store, versus larger conglomerates, such as Wal-Mart (left), Carrefour and Tesco, where staff members are specifically hired to maintain a clean store.

7. REPUTATION
32 percent
A brand’s reputation has everything to do with young consumers’ trust and perceptions as being trendy, fashionable and worth whatever price is paid. “Young people want to shop in places they can brag about to their friends. Again, it all goes back to social status for many of these consumers,” said Bergstrom. However, another challenge to a brand’s reputation is whether consumers feel that the goods being sold are authentic. WWD reported in April, “China remains the number-one culprit for fashion counterfeits that expose U.S. brands to millions of dollars in lost revenue.” Bergstrom agreed: “Brands need to be very aware of this. The challenge for them is how they can connect with their consumers, gain their trust and still manage their environments.”

8. INFORMATION
28 percent
At Fashion Group International’s panel discussion last week, panelist Jacquelyn Wenzel, president of Ports 1961, stressed the importance of promoting a brand’s heritage in stores, since the Chinese customer, “whose lifestyle is strongly tied to family values, appreciates a story when they buy into a brand.” Bergstrom shared this view and pointed out that relaying this type of information to consumers has become a huge trend for big-name brands such as Levi’s and Nike. “Levi’s has such a history, and everyone knows it’s because of how well the brand communicates that history,” she stated. For Nike, she added, “You go into their stores in China, they have information displayed everywhere, such as where the brand originated. It educates your consumer as to what you are all about.”

9. DISPLAYS
28 percent
“In China, displays run the full range,” said Bergstrom. “Some apparel stores simply feature mannequins next to piles of clothes on tables, while other store displays are sophisticated and beautiful and colorful, and you can see how the product looks best in its environment.” She pointed out that display options (other than mannequins) include featuring apparel with unique hanging systems upon the walls or creatively hanging outfits next to tables of merchandise. Last year, Calvin Klein was up to the challenge of opening the Calvin Klein Collection store in Beijing, the line’s first in China. Store displays featured oversize pictures across the walls of models wearing the latest available merchandise.

10. LOCATION
22 percent
The convenience factor, which is typically quite high for U.S. shoppers, just makes the cut for China’s top 10. Still, noted Bergstrom, convenient store locations are still quite attractive to consumers. “Chinese youth shop a lot,” she said. “It’s very much a pastime for them. In a lot of the urban centers, stores are aligned in such a way that youth can become very educated consumers very quickly.” In China, malls such as the South China Mall in Guangdong (left), Xidan Shopping Center in Beijing and Gateway Plaza in Shanghai are conveniently located in urban areas and near public transportation. Of the position of the ranking, she commented: “I actually thought ‘location’ would be higher, but what this tells me is that young consumers are willing to go further out of their way to have a different kind of experience.”