A resurgence of traditional culture and a fast-growing overseas population fuel a new chapter for Han Chinese ethnic clothing. 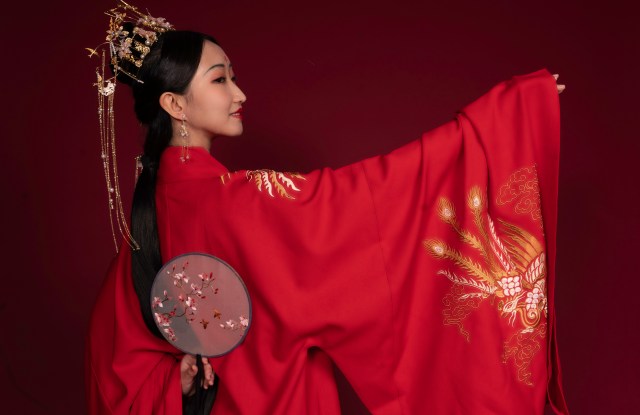 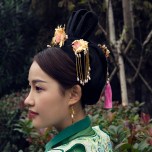 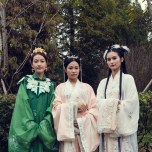 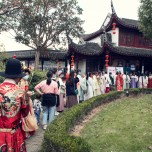 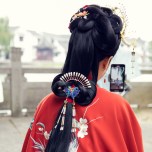 LONDON — The qipao, with its distinctive mandarin collar and body-hugging shape, is what most people imagine when it comes to traditional Chinese clothing. Whether on Maggie Cheung in “In the Mood for Love” or the caricatured versions that appear on the Street Fighter character Chun-Li, it’s an outfit that rings familiar to many around the world as a signpost of Chinese tradition.

But historically speaking, the qipao is actually a recent addition to Chinese wardrobes and a foreign one at that. It was the ethnic Manchurian rulers in the Qing dynasty who decreed the population from the mid-17th century should follow their court dress, as opposed to the Hanfu (literally meaning the clothing for Han people) that had been worn for many millennia.

Fast-forward to today and a younger generation, in step with a growing and more powerful China, is mining the country’s rich history to express a sense of national identity through clothing. Over the last decade Hanfu enthusiasts have grown in number and don the often richly patterned and voluminous garments of the past to meet with friends or go about their everyday lives.

While it is hard to pin down exactly what constitutes Hanfu — it is a form of dress that has evolved over thousands of years — the most popular styles seeing a revival are modern interpretations from the Tang, Song, and Ming dynasties, three of the most prosperous periods in Chinese history.

The Tang style usually involves a flowing, high-waist design; the Song style comprises three pieces that include a robe with wide sleeves, a maxi skirt, and a brassiere, while the Ming style is known for its opulent volume and rich textiles. 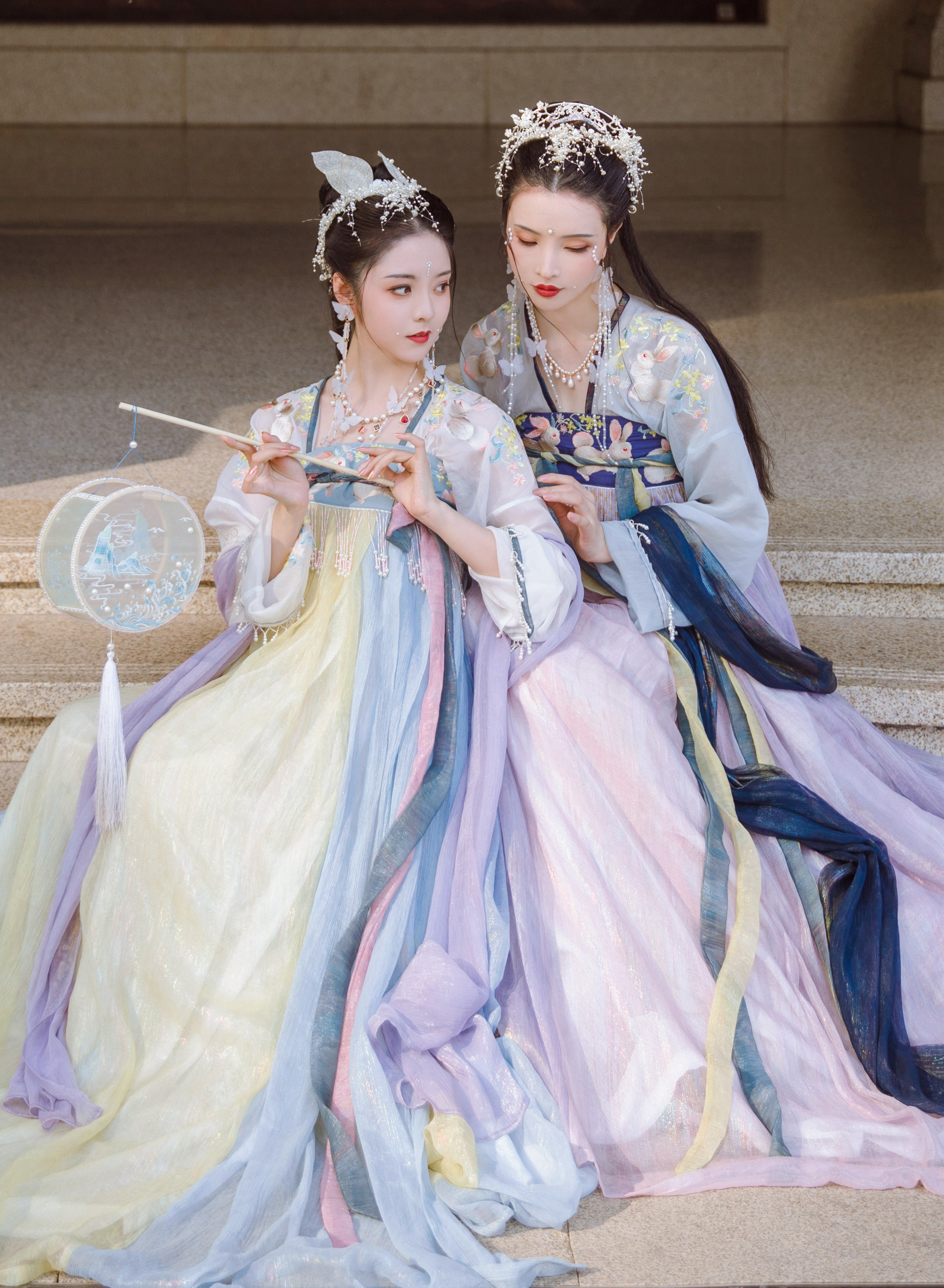 According to Xiaowei Lv, founder of Chonghui Hantang, one of the top-selling Hanfu brands on Taobao with more than 2.7 million followers and 28 physical stores across the country, Hanfu academically refers to clothing worn by people in the Han dynasty, or people who lived in Zhongyuan, the area on the lower reaches of the Yellow River that was the cradle of Chinese civilization.

“The concept of Hanfu started from a group of classic culture lovers,” said Yiheng Zhao, a research assistant at Reynolds Journalism Institute at the University of Missouri, herself a Hanfu enthusiast. “They want China to adopt it as traditional formal wear like the Japanese kimono and Korean hanbok. It is the symbol of a cultural renaissance that encourage people to follow the ancient Chinese traditions.”

While China’s first lady Peng Li Yuan can often be seen in the qipao (also known as the cheongsam), Hanfu is not seen as appropriate wear for leaders and dignitaries — at least not yet. 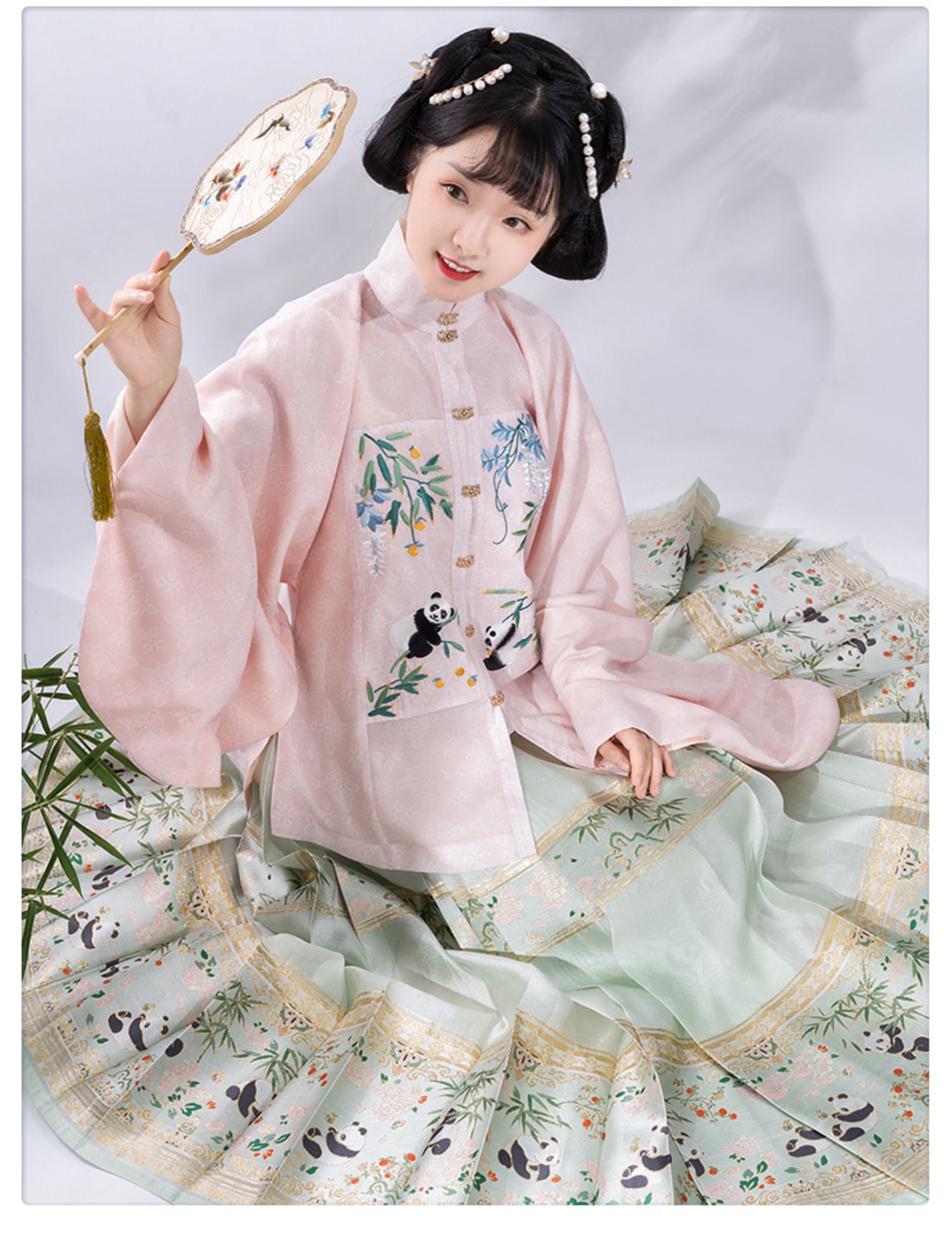 According to interest group Hanfu Information’s annual report last year, an estimated 3.61 million people — a 77 percent jump from 2018 — identify themselves as Hanfu enthusiasts, of which 86 percent are female and 15 percent are male. There were a total of 1,188 orthodox Hanfu retailers on Taobao in 2019, a 45.8 percent increase from a year prior. The numbers were based on a survey the group conducted with 2,276 participants.

“Based on the assumption that they purchase a full set of Hanfu every three months, the Hanfu market is valued at 5 billion renminbi [$756 million],” said Lv of Chonghui Hantang. “Some investment institutions have calculated and projected that the Hanfu market in 2019 was valued between 8 billion and 10 billion renminbi if you included people who buy Hanfu for photoshoots or various needs such as music performances, tea ceremonies, and cultural events.”

The trend is growing outside of China, too, thanks to a large diaspora. With a growing number of young Chinese studying abroad, Hanfu is gradually finding its footing across the globe. According to the interest group Hanfu Map, there are 41 registered Hanfu organizations outside China, each counting at least a few hundred members.

Liang Ming, a social worker and founder of New York Hanfu Corporation, said wearing Hanfu offers overseas Chinese a tangible connection to their heritage. In addition to help promote Chinese culture to other communities, it can also be a useful way to network.

“Generally speaking, Hanfu enthusiasts are mainly composed of the post-Eighties, post-Nineties, and even the post-Aughts generations who love Chinese traditional culture,” Ming said. 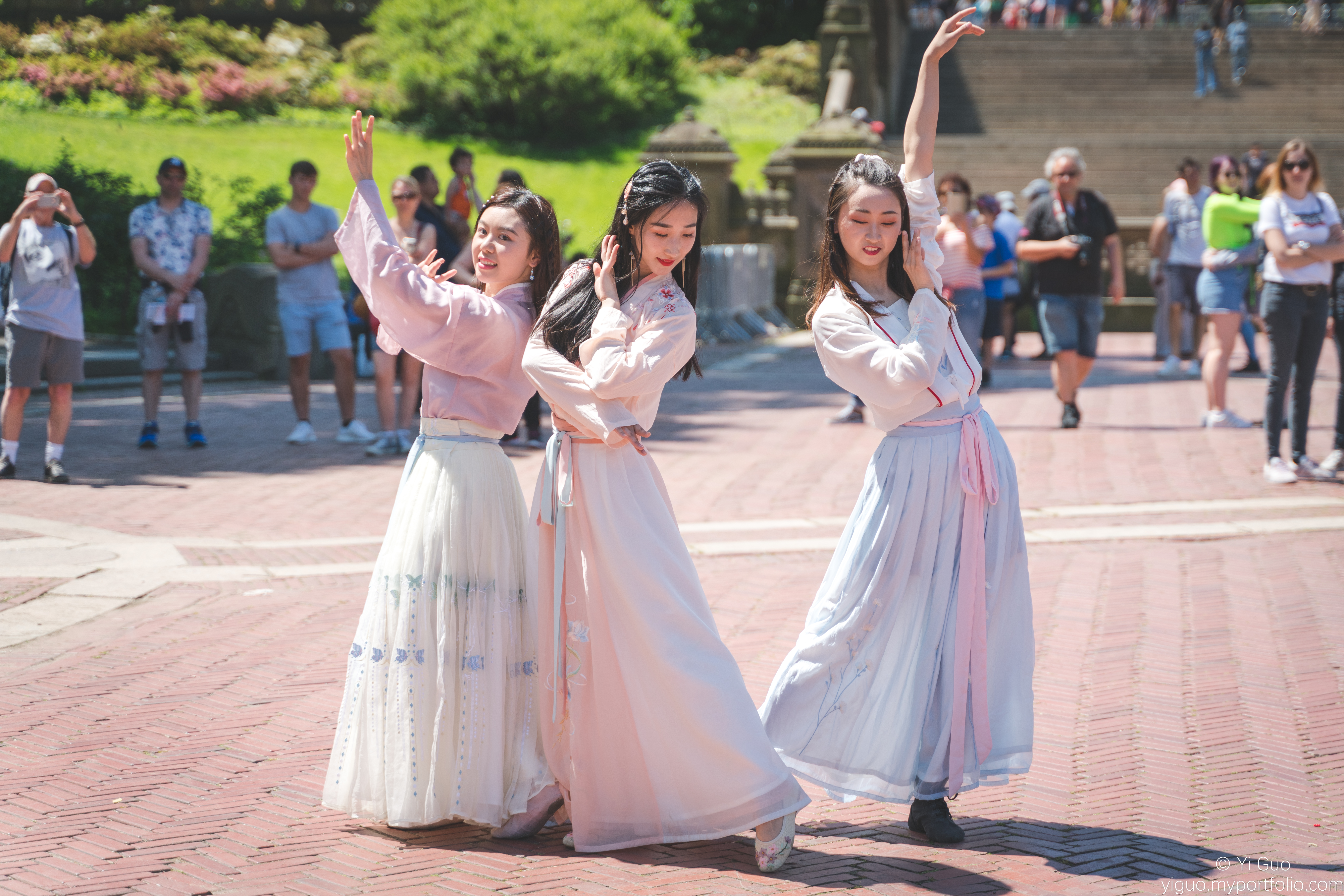 There are mainly three types of people who wear Hanfu. The first type, who also tend to be the most active within the Hanfu core circle, use it to reconnect with a traditional lifestyle and care a great deal about whether their Hanfu is historically accurate. The second are those who wear Hanfu in their spare time and participate in Hanfu gatherings to meet new friends with similar interests and acquire new skills, such as painting and calligraphy.

The third type, which has rapidly emerged within the last few years, are people who are steeped in gaming and anime culture. They wear Hanfu to showcase their love of history, as well as broadcast their personal style.

Olivia Chen, an office assistant and the head of Hanfu Interest Group in Los Angeles, said member counts have grown tenfold since 2013 to more than 300 people now. Pre-pandemic, she typically organized monthly events to either celebrate Chinese traditional festivals or host gatherings where participants practiced seal carving and making hairpins, all done while wearing Hanfu. 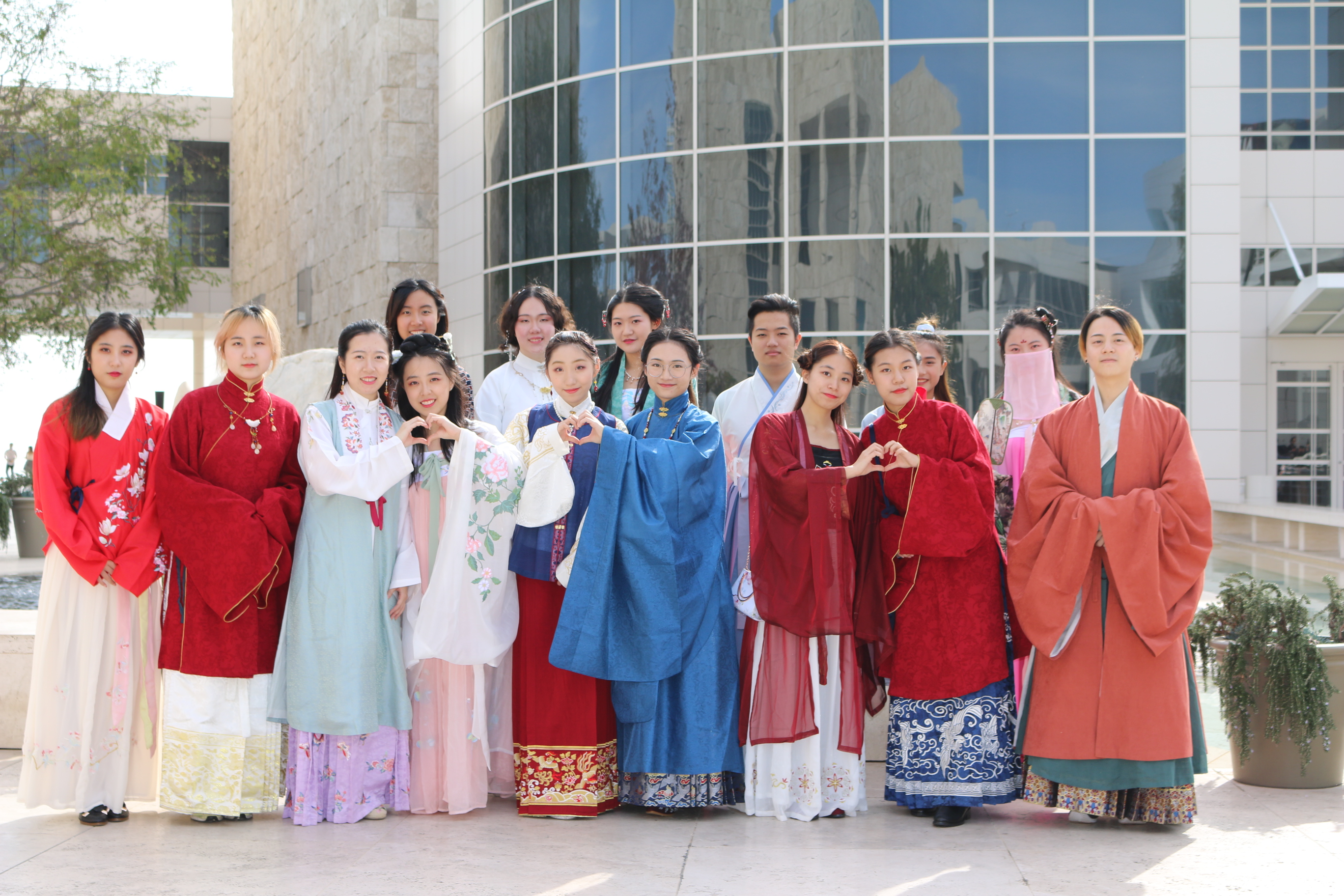 A Renewed Sense of Identity

First banned by Manchurian Qing dynasty rulers looking to solidify their power over a larger ethnic group, Hanfu continued to be sidelined during Mao Zedong’s era. Traditional Chinese clothing was seen to be a symbol of imperial times and, therefore, against Communist ideals. But as China shifted its focus to the economy in the Eighties, the clothing began to gain popularity in mainstream culture.

In the last few decades, period dramas have become some of the biggest entertainment hits in China. The medium provides more creative freedom than a show or film set within more recent times, which would be more tightly scrutinized by government censors to align with Communist Party viewpoints. From early TV adaptations of Chinese classics like “Dream of the Red Chamber” and “Romance of the Three Kingdoms” to contemporary retellings such as “The Empress of China,” and adaptations of popular online historical fictions like “Langya Bang,” a new generation of young Chinese have grown up seeing traditional Hanfu on their screens daily.

At the same time, philosophies like Confucianism and Taoism are now commonplace in modern China’s education system. Compared to their parents who lived through the Cultural Revolution and were asked to renounce these ideas, a younger generation has been encouraged to connect with traditional culture. 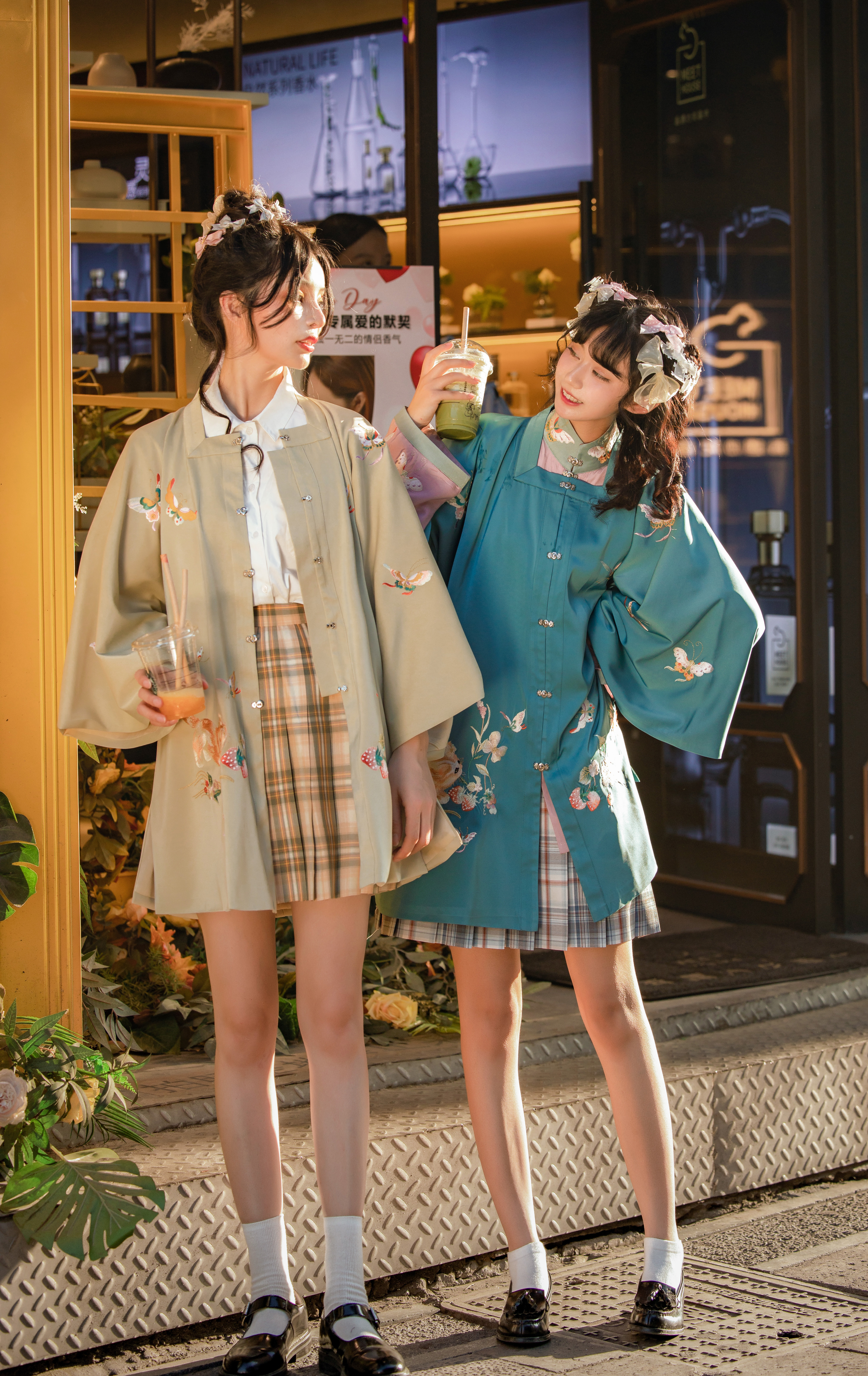 But the idea of Hanfu is not to replicate what the historians excavated from tombs or ancient texts. In Zhao’s opinion, it is more like “a new age urban subculture similar to cosplay and Japanese Lolita dresses,” or “a Chinese version of Afrofuturism.”

Over the years, a sizable industry has been established to serve Hanfu lovers of all kinds. While a Hanfu outfit can be had for as low as 100 renminbi ($15) and made-to-order outfits can cost upward of 10,000 renminbi ($1,500), Hanfu ensembles that cost between 100 to 500 renminbi represent 70 percent of the market share, according to Hanfu Information.

The most expensive Hanfu outift Ming ever acquired was from Minghuatang, which cost 12,000 renminbi, and she waited four months to have it made exclusively for her. Wait lists at high-end Hanfu makers like Minghuatang stretch as far out as the end of 2021.

The revival of high Chinese craft stirred up by Hanfu is something Adrian Cheng, chief executive officer of the Hong Kong-listed New World Development, told WWD he was pleased to see.

“Heritage is a very big movement now in China; they want to know what’s behind this artisanship,” he said. “Millennials, and especially Gen Z, are into this idea of knowledge capital. There’s a big paradigm shift coming.…I think people are going back to exploring their roots, and seeing how the hand can create beautiful, artisanal objects.” 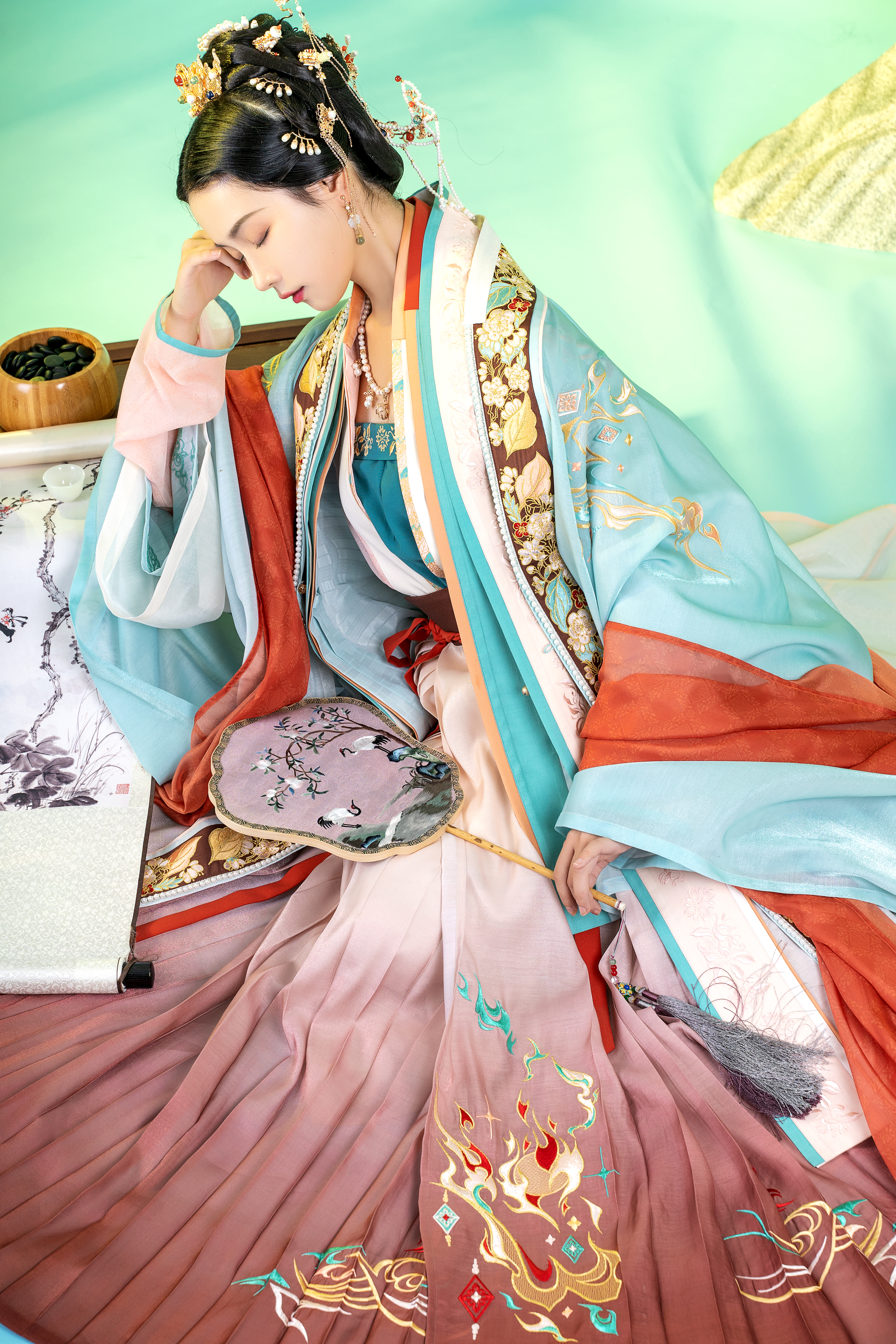 Hanfu style inspired by the Spring and Autumn period, by Chonghui Hantang.  Courtesy

Yan Dai, founder of Hanfu brand Sinange, said the Hanfu market is on the cusp of a boom, but “we will need to agree on a Hanfu system first, then we can scale up and bring Hanfu to the mainstream society.”

For the moment, there isn’t one universal Hanfu style that everyone can agree on, and there may never be one. Each dynasty had its distinctive styles for members of every class, from royals to officials and warriors, and further variations depending on the purpose, be it religious ceremonies, weddings, funerals or day-to-day outfits for working in the paddy fields or going to the markets.

In New York, for example, Ming said Qixiong Ruqun, a style of flowing, high-waist traditional dress worn by women during the Sui, Tang, and Five dynasties, is very popular among young girls. Meanwhile, styles from the Song dynasty, which can be easily mixed and matched with contemporary clothing, have been gaining momentum because there have been more period dramas set in this period recently.

The best-selling style from Chonghui Hantang this year has been a Song-style garment, while for fall, an opulent Ming-style coat and pleated skirt are in vogue. 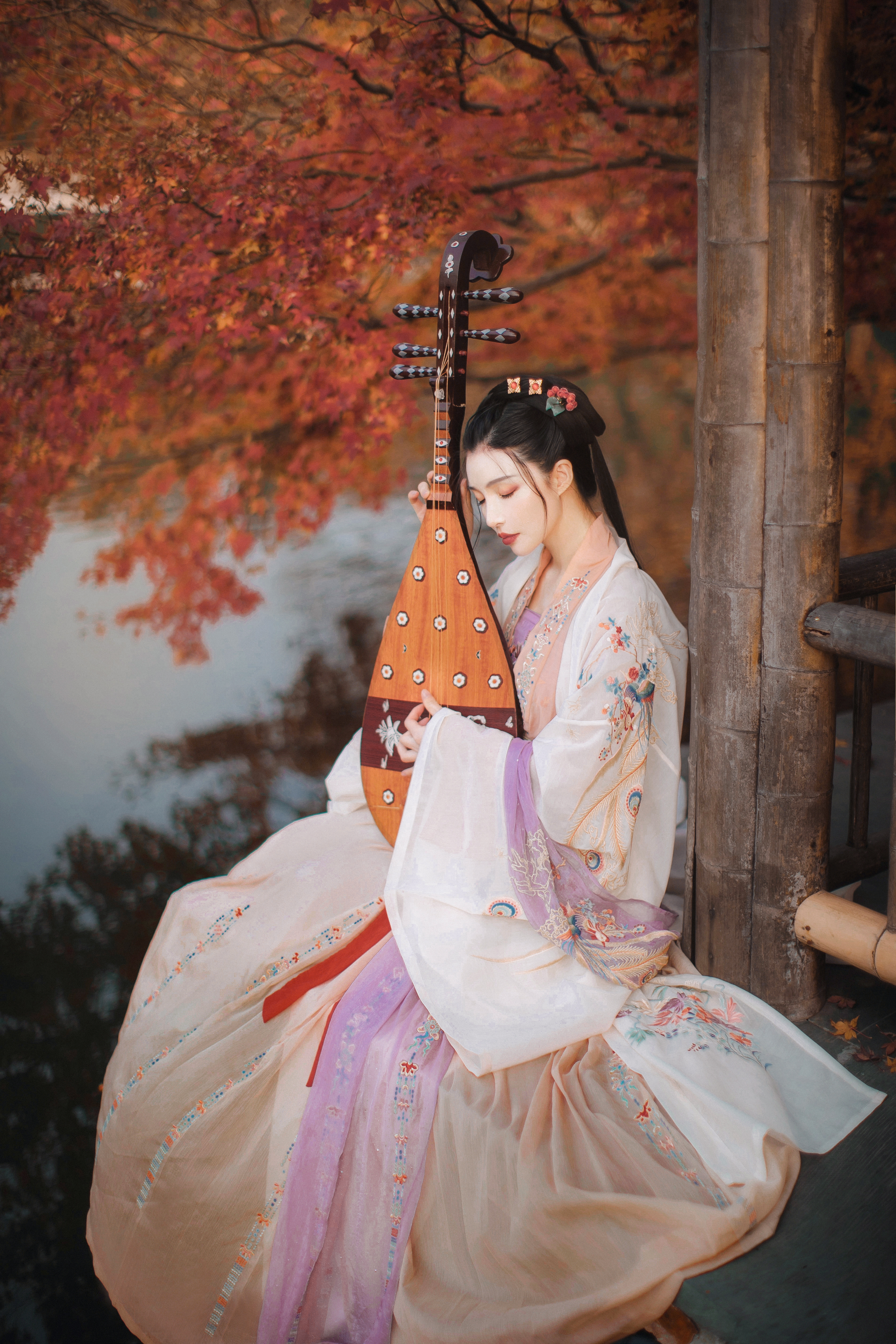 Lv admits that a big misconception around Hanfu is that some believe wearing it equates to giving up all modern amenities.

“I want the public to understand that Hanfu can be fully integrated into our modern lifestyle. For example, we use modern factories and sewing tools to produce Hanfu. We use mobile phones and computers, we drive cars and even ride bicycles in Hanfu. We can go to work, do sports, shop, cook, and even bungee jumping and skiing in Hanfu,” Lv said.

“All my Hanfu designs are original, and most of them were developed from fabrics and with patterns that are drawn and arranged by ourselves, colors dyed, patterns woven, and even some decorative techniques on fabrics have to be discussed with factories before they can be made, such as gold embossing and unique coloring, and it took more than half a year for some factories to make two styles of Hanfu under our guidance,” he added. “Therefore, the design of Hanfu is very costly and laborious, and requires a lot of innovation.”

Hanfu Information’s report data showed that more than 65.1 percent of Hanfu enthusiasts prefer Hanfu that maintains its historical shape, but are made with prettier fabrics, and 18.7 percent prefer modernized versions. More than 60 percent of them expressed the desire to wear Hanfu on a daily basis. Only 1.1 percent said they only wear Hanfu at home.

“I would very much like to see a traditional culture-oriented, Internet-based movement shaping the elite fashion industry,” said Zhao, when asked about the future of Hanfu. “I think the day that Hanfu becomes a part of mainstream fashion is very close. It just may not be the form we are looking at today.” 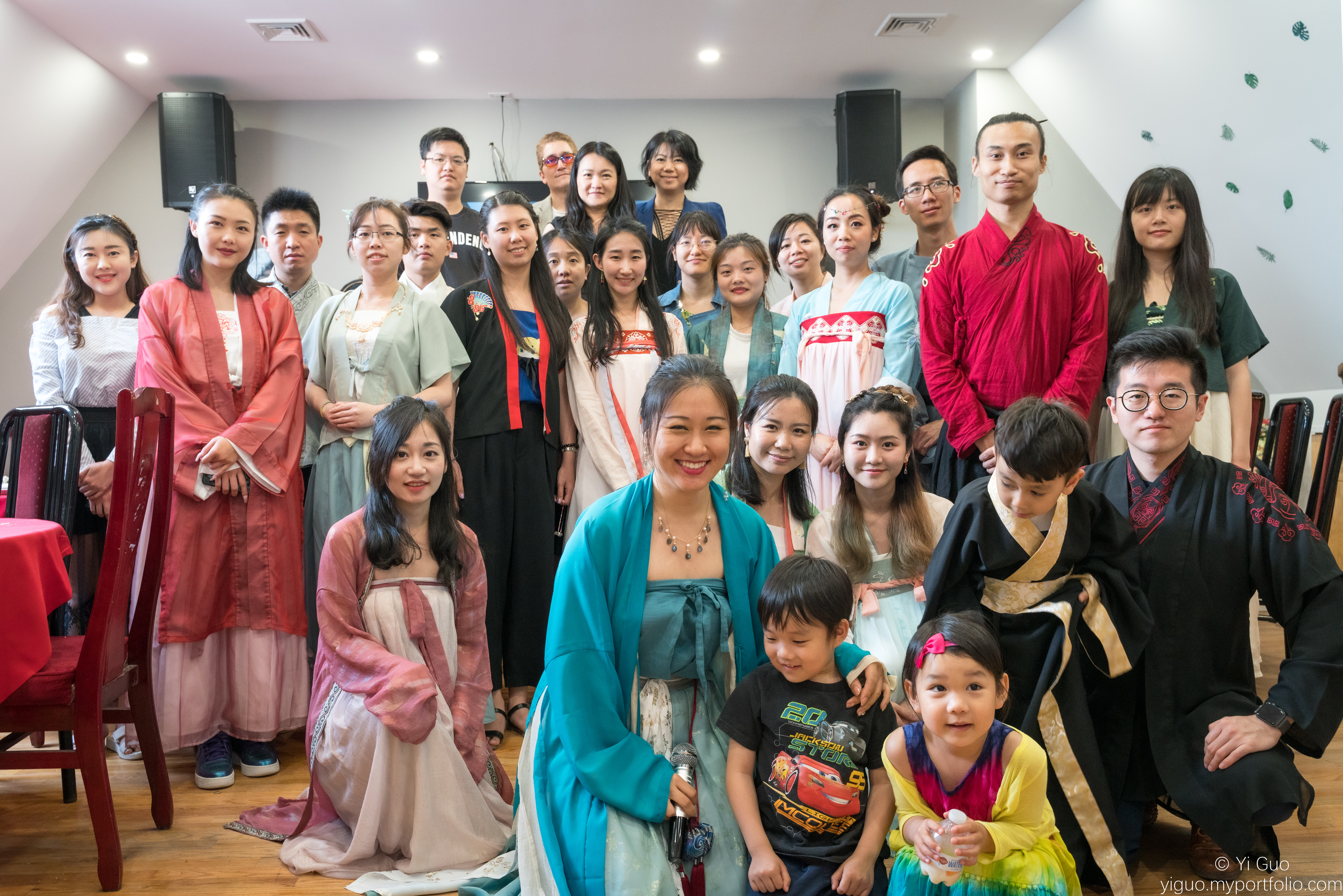 According to Ming, there is still a long way to go for Hanfu to be fully accepted by mainstream society in China.

“There is always this misunderstanding that the public thinks wearing Hanfu is equal to wearing historical costumes, or cosplay,”  he said.

Lv, however, is optimistic.

“I think that Hanfu is currently being noticed by the mainstream media, and the leadership in China, and is probably very close to being accepted by the mainstream culture, which may take another few years….With the rise of China’s economy and national power, the revival of Chinese culture on a global stage is inevitable, and Hanfu is a part of traditional Chinese culture,” she said, adding, “the most beautiful part of it.”

Celebrating Hanfu at a Festival in Xitang >>