BEIJING —The fallout from the canceled Dolce & Gabbana show and the brand’s inflammatory remarks about China continued to roil the Chinese fashion world with powerful editors, influencers, and celebrities expressing everything from rage to deep disappointment.

It prompted the Italian fashion house, which blamed the remarks on a hacker, to issue a second, longer public apology. However, the words may fall on deaf ears among the fashion and celebrity set. An anonymous source within Harper’s Bazaar China told WWD the magazine would not be shooting any Dolce & Gabbana products any longer, while others said they were personally boycotting the brand.

The brand’s second apology said: “Our dream was to bring to Shanghai a tribute event dedicated to China which tells our history and vision. It was not simply a fashion show, but something that we created especially with love and passion for China and all the people around the world who love Dolce & Gabbana. What happened today was very unfortunate not only for us, but also for all the people who worked day and night to bring this event to life. From the bottom of our hearts, we would like to express our gratitude to our friends and guests. Domenico Dolce and Stefano Gabbana.”

A round up of key selected reactions below:

“As I have voiced time and again publicly and privately, western brands seeking to enter and expand in China should be aware of Chinese cultural sensibilities. Instead of dictating everything from head office, they would gain a lot from listening to the opinions and insights of their Chinese teams.”

“Self inflicted” she wrote on Weibo, alongside a cartoon image which read “your s*** return it to you”.

Earlier, she had posted. “Starting today, Miss Zhang and her team will not buy and use any D&G products.”

“I already had a strong stance on this. They invited me over a month ago to attend [the show] but I declined. Right now, I don’t agree with their values. Brokenly worshipping money and consumption.”

Posted to Instagram: “In my two decades of working in this industry here in China, I can truly say without a doubt, from day one, in each and every event, we as a community – production agencies, PR firms, hotels, transportation, security, catering, printers, photographers, video crews, florist, hair stylists, make up artists, models, model agencies, dressers, stylists etc. delivered world class results and services. And in many occasions surpassed anything internationally. Setting new gold standards. We as a collective community should take pride in that.”

“It is our Positivity, our ‘Yes We Can’ attitude, our Work Ethic that defines us. Finally, let this be a lesson and a clear message to the international brand teams and powers that be. Respect, Listen, Engage with your local brand colleagues. Just because they are nice does not mean you can or should walk all over them. Their success is your successes. And events from the past few days clearly demonstrates the detriment in not doing so.”

“Now that no one will be wearing any of your 500 looks tonight and that your show is canceled, you might have some free time to go get educated about respect and equality. Saying that your accounts (both personal and official: Dolce & Gabbana) were hacked show how much of a coward you are. Could you please at least take responsibility for your behavior? Because I can tell you that no one buys that s***.

Be sure that from now on, no one from China (and probably the whole world) will ever purchase anything from your brand. Sucks, right? You thought you would make money by coming to China and holding a show while being so disrespectful and racist? You got it all wrong because we aren’t dumb when you say you love China. You don’t love China, you love money. China is rich, yes, but China is rich in its values, its culture and its people and they won’t spend a penny on a brand that does not respect that.”

The designer created a protest shirt which read, “Not Me” in the front and “Bye Already @stefanogabbana” on the back.

“What I want to say is one person’s hateful words in one moment decimated so many people’s hard work and then push the blame onto hackers. This cannot be tolerated.” 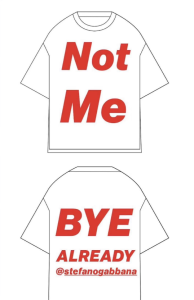 “It makes a total mockery of an industry that is by and large full of hard working people that don’t grab headlines but are just making a living doing what they love. It gives fuel to people who already think fashion is full of laughable airs and graces, and contributes little to society at large.”

“Here [is] some Chinese culture I’d like to share. (YI ZI QIAN JIN) The meaning of these four words in Chinese is every single word that people [has spoken] is like a thousand heavy gold and you CANNOT take it back easily.”

“The created [videos] had a lot of unsuitable elements to it no matter if you meant it to be insulting or not. You created a picture, a text, a video, which made a lot of Chinese feel uncomfortable after seeing it. That itself is a kind of disrespect to Chinese culture. Then what was revealed were extremely upsetting comments…I think no matter how you appear to be catering to the Chinese market, you’re looking down on China.”

“He himself is the image of the brand, which is the thing that can’t be forgiven anyway. I think fashion is a business. If you want to do business well, you must know how to respect this market. If you don’t respect this market, then don’t do the business.”