Chinese Fashion Industry Leaders Offer Advice to Get Through Lockdown

Leading Chinese fashion industry figures from various fields share advice on living through the coronavirus outbreak in China as their peers in the West begin to experience similar situations:

Tsui is one of the most in-demand fashion photographers in Beijing. Since the outbreak, he has shot two campaigns and five editorials for Japanese clients, and two editorials for Chinese magazines. He had to only work with local talents in the past two months due to strict travel rules, but the demand is rising as international shoots become a no go.

Below is what he has been advising his Japanese clients on what to do on set.

1. Try not to use the shared location bus. Come on set by yourselves if possible and sanitize your hands before working.

2. Hair and makeup artists must wear masks. Close contact with models and celebrities within 1 meter, or 3 feet, can pass on pathogens.

4. Sanitize your equipment after the job is done.

5. If you can afford to not work, don’t work. Leave the opportunity to the younger generation.

Having spent the last 25 years in Asia, Reuter runs a successful communication agency in Shanghai, with offices around the globe. She lists four key points for business owners during the outbreak.

Communication (and reassurance) is key: Map out your different stakeholders and ensure clear communications. For example, with staff working remotely it’s important to stay connected and keep them informed. Everyone is overwhelmed with news and rumors, it’s scary. Keep a cool head.

Maintain (some sense) of normality: When everyone was working remotely across China we tried to keep our normal structure of Monday morning briefings, team meetings, etc.; but we moved everything online. Some of our sporty staff even live-streamed exercise classes. China has been incredibly innovative with tech solutions to help companies deal with the situation. There are great examples to learn here.

Plan for the future: Business will rebound! Now is a time to start planning for future campaigns. 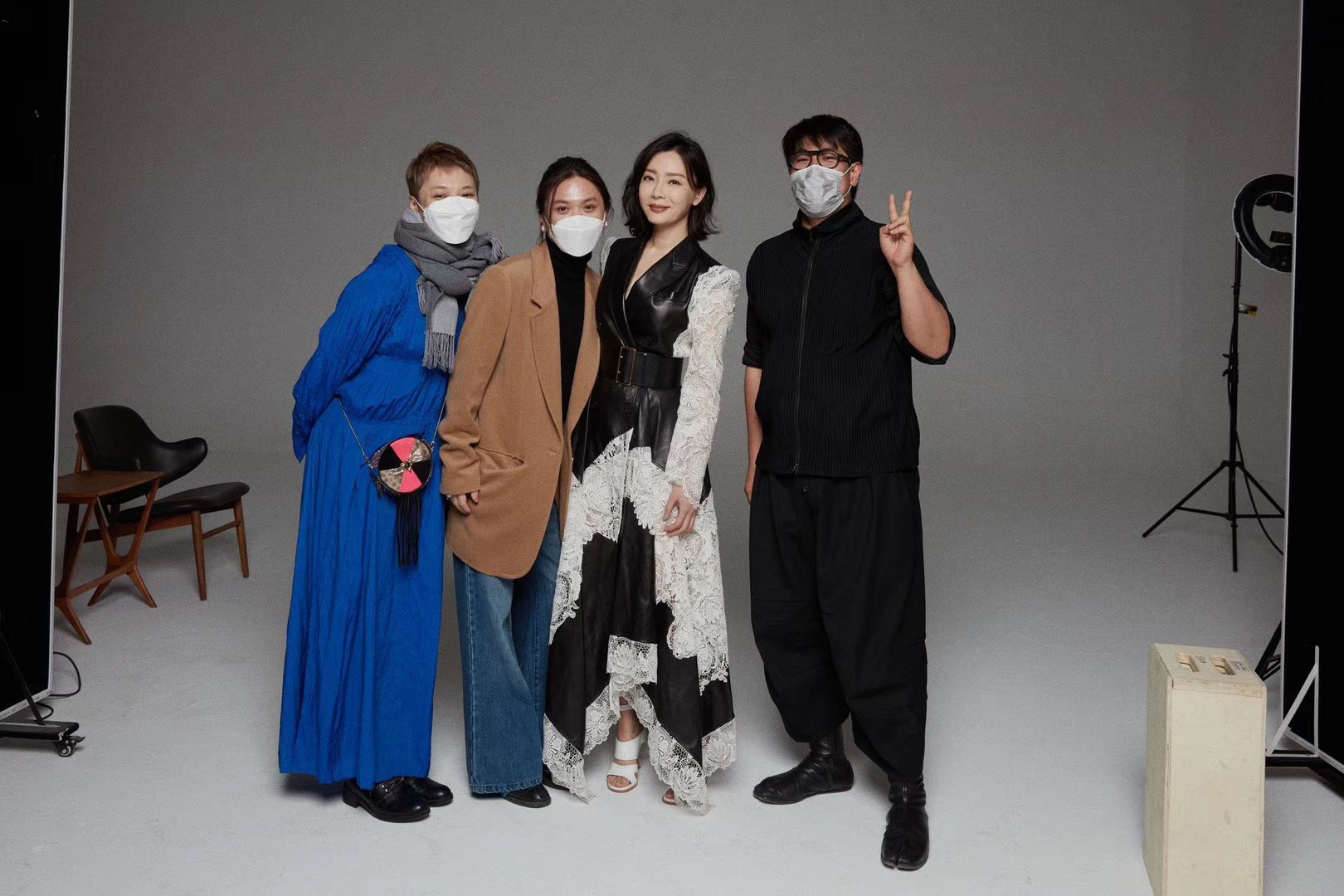 Jumbo Tsui on set with the Vogue China team, wearing masks during the outbreak in China.  Courtesy Photo

Travel restrictions had a real impact on fashion publications. Zhuge said Elle China had to change the cover shoot with Léa Seydoux as well as 60 percent of the content for the April issue. Her team was due to fly to New York for the shoot, but President Trump’s travel ban to China came one day earlier. She ended up monitoring the shoot with live-streaming on WeChat across the Pacific Ocean.

“I am glad I was working with a team that I know well and Léa was very incorporating. She also kindly agreed to change the topic of her interview as we reshape the whole issue to nature protection for April,” she said, and stressed that working with people you trust is crucial in a critical situation like this.

For the upcoming Shanghai Fashion Week, Super Elle, a sister publication for a younger Chinese audience to Elle China, is launching its own online fashion showcase with 15 brands including Masha Ma, Susan Fang, Shuting Qiu, Shiatzy Chen and Sankuanz.

Zhuge said, “Many brands had to cancel their fashion shows in Europe, we are here to provide a platform for designers to showcase their fall 2020 collection. Unlike working with Tmall, where you need to set up an online shop as a part of the deal, our motive is purer and our lineup is more selective. I want to give designers the attention they deserve from our readers.”

Zhou has been in Amsterdam since his fall 2020 show in London in January. His colleagues in China are still working from home, and Zhou said remote working has some unexpected benefits.

“I used to think meeting with everyone sitting in one room is the most efficient way, but now I realize that since I need to make sure everyone is on the same page, I begin to outline my idea in great detail on paper before I share with the team. This actually increased productivity,” he said.

On production, he is confident that he will be able to deliver on time. “We finish almost everything before the Chinese New Year, and we timed in the holiday gap in our planning. Now the factory is back on full force, the impact will be minimal,” he added.

While the Netherlands is less impacted than its neighbors, Zhou has been self-isolating since late January. “I was going to fly back to Beijing on Tuesday, but I changed my flight to late April after I saw Beijing’s crackdown on imported cases. I think it’s better for everyone that I stay where I am and not bring any more burden.”

The silver lining is that Zhou is on track to becoming a master chef. “I am cooking all sorts of things at home. I can open a restaurant when the pandemic goes away,” he said. “I rarely have this much free time, to be honest. It helps me to pause, relax and reflect.”

Liu had no time to rest during the outbreak. Her designer support and retail platform Labelhood is what international guests usually come to Shanghai Fashion Week to see. She quickly decided to work with Tmall to bring the showcase and sales online, to prevent cash flow disruption for young designers who are showing in Shanghai.

“We are the most unfortunate that the pandemic started here, but fortunately China also has the most advanced Internet infrastructure, and self-help methods can be adopted fairly quick,” she said. “Direct-to-consumer is the most effective way. WeChat group live-streaming is more important than any other way to sustain a brand image in this period of time. No business does not mean that the operation is stopped. There must also be goals during the outbreak, to motivate the team and retain morale.”

“Moving the fashion showcase online is brand new for Labelhood, but I think it is a meaningful experiment, and to signal the rest of the world that things are going up again,” she added. 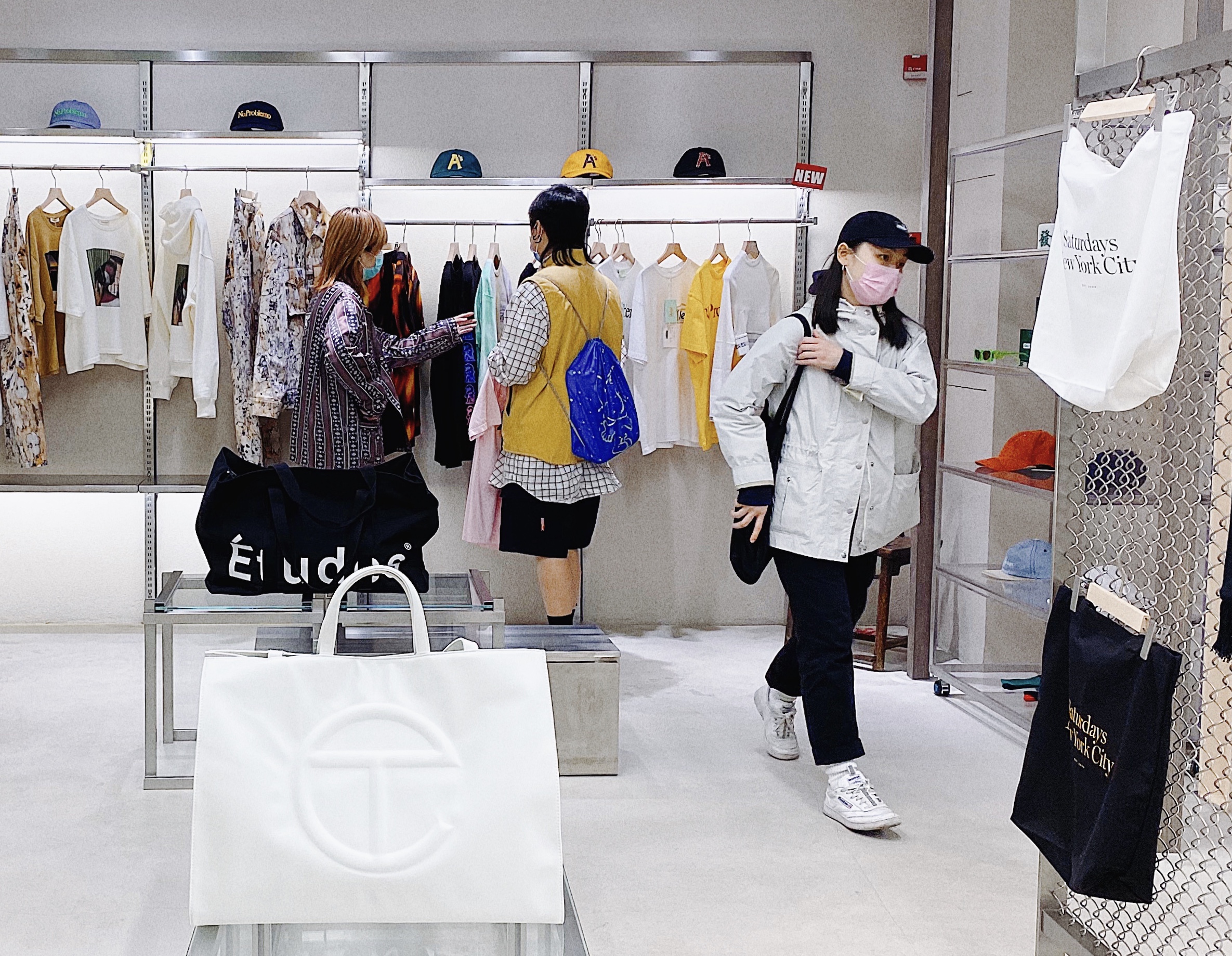 As the owner of one of Shanghai’s most exciting shopping destinations, Hong said the business is slowly returning to normal. During the outbreak, around 20 people visited the store a day. Last weekend, the number jumped to 150.

From her observation, Hong advises retailers to move fast and stay safe. “Create interesting online content and spread positive messages, roll out new promotions and new drops daily online, and show your support by joining a charity program to help battle the virus.”

In the store, she checked the temperature of each customer coming in and handed out facial masks and sanitizer to employees every day. The online promotion also applies in-store and she added gifts for each client, to create a warm and welcoming shopping environment.

“This is not a time to rest, but a time to think and evolve. I believe when we all overcome this crisis, the way of how we work and communicate will change forever. Be ready to engage in a world where social media and honest, genuine creative digital content becomes increasingly crucial for any brand,” said Qiu, who relocated from Hong Kong to Shanghai last year and set up his own communications and consultancy firm, BOH Project, after working for Mr Porter for more than four years.

“At the moment, we are working on probably the world’s first online fashion week happening soon in Shanghai, and I am very excited about it. I know many peers in the West are watching closely how we will do it, as soon they may need to take the same challenge. Surely it is uncharted territory for most of us in the fashion industry and I understand many brands with traditional image baggage have a hard time wrapping their minds around this evolution. We might make mistakes, but this is the time to learn, absorb, get creative, think outside the box and craft out a path to lead a new wave of fashion digitalization,” he added.

In the coming months, Qiu thinks it will be crucial for many brands in the U.S.and Europe that rely on more traditional off-line retail channels to overcome the crisis. Fortunately, as China recovers, the new opportunities there might be able to make up some of the drops in budget or activities from the West.

“During the quarantine, it was difficult at first, but I actually quite enjoyed the period in the end. Being able to spend time with the family and pick up old or new hobbies like cooking, making music or yoga have been an enriching experience. It made me realize how little things one needs to be happy and healthy. Now I actually quite miss it but also feel recharged and inspired,” he said. 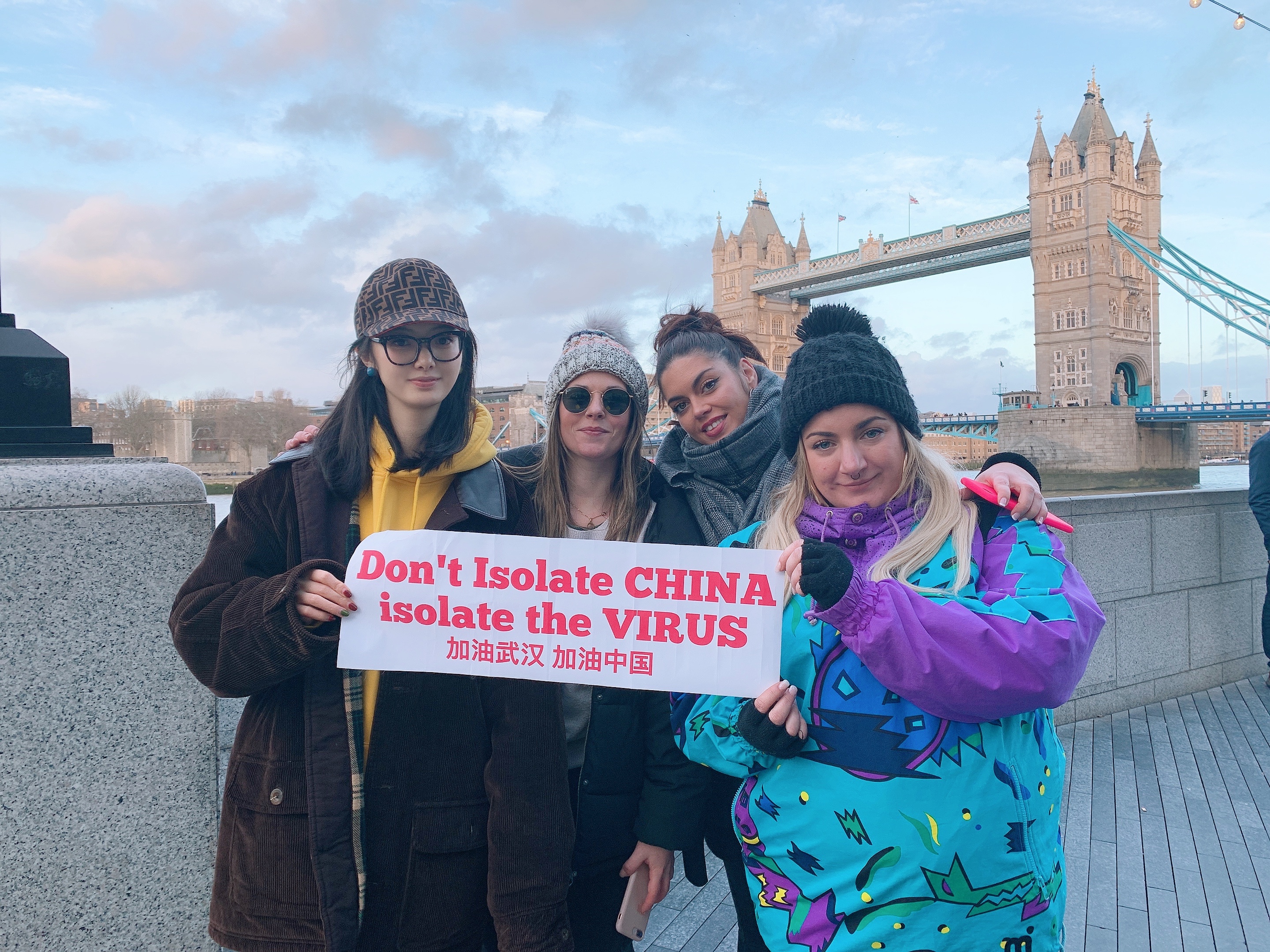 Wang is the number-one influencer on China’s social commerce platform Xiaohongshu with 3.56 million followers. She noticed that her online engagement saw a clear jump during the outbreak, as her content served as a form of entertainment to her followers when most of China is under strict travel restrictions.

When she was attending London Fashion Week in February, Wang started a social campaign “Don’t isolate China, isolate the virus,” to raise awareness of the underlining racism issue. Her action was praised by China’s mainstream media and demonstrated how influencers can properly exert their power.

“By keeping yourself up to date with the current situation of each country and guidelines by the World Health Organization, we will be able to contain the virus as quickly as possible and get through this together. Individuals should take initiatives to be socially responsible for each and every one of themselves, as well as the welfare of others. We can definitely take control of this situation and win the fight against the COVID-19 virus!” she said.

Chan arrived in Hong Kong from Zurich, on the first flight on the first morning the local authorities carried out a compulsory 14-day self-quarantine for those who arrive from Europe. He was one of the first to document what measures were taken to track visitors via a wristband on social media.

He had been traveling in Europe for more than 40 days for fashion weeks. He extended his trip to hide from the outbreak in Asia. “But I have come to terms that I need to go home and take the quarantine. That’s the only choice. I have been home away for too long,” he said.

Hong Kong is relatively not as severe as Europe, and the contact-free delivery option on Deliveroo enables him to enjoy wonton soup while staying in.

Being an influencer, Chan also believes he needs to take social responsibilities. “We should keep a positive attitude, and share useful and correct information with our followers because people are fragile in a situation like this,” he added.

With more than 100 million monthly active users, Xiaohongshu has become a main source of entertainment for the affluent class in China. According to Li, food, culture, entertainment, workout, health and education are some of the fastest-growing content categories since the outbreak. The number of Xiaohongshu’s daily active users saw a 35 percent jump, and average usage also increased by 44.9 percent.

Food-related content grew 103.5 percent from the previous 30 days. It even surpassed beauty content, which is what Xiaohongshu is known for, to become the most popular category. More than 620,000 posts were created under the tag “Stay home cooking different every day,” with 390 million impressions.

Workout and beauty content also saw significant growth. Yoga and plank workouts are the most engaging content, while the “stay home beauty routine” tag had 26.87 million views within two weeks after the outbreak.