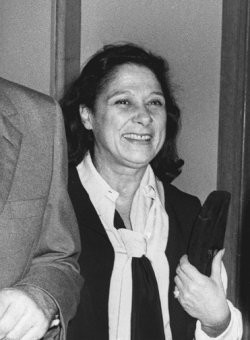 PARIS — Chloé is celebrating its roots as well as its future.

The house marked its 50th anniversary Thursday night with a party at Café de Flore, where Chloé co-founder Gaby Aghion unveiled her first collection and established femininity and lightness as bywords for the brand.

But Chloé is looking ahead, too. With a new fragrance, a lingerie launch and more flagships among projects on the horizon, the company is capitalizing on its new youthful direction and the momentum of its creative director Phoebe Philo, the latest in a string of stewards of the house’s image, who have included Karl Lagerfeld and Stella McCartney.

“Chloé is definitely on the right track,” said Alain Dominique Perrin, chief executive officer of Compagnie Financière Richemont SA, Chloé’s parent. “It’s one of the rare brands in the world which is not making noise just for the sake of making noise. It’s always been about creativity and craftsmanship and making beautiful products.”

“Chloé has been about femininity, romanticism and sexiness for 50 years and it’s never changed,” agreed Ralph Toledano, president of the company since 1999 and the architect of its current expansion drive. “Our asset is our creativity and our ability to be loyal to our brand image.”

Toledano declined to give figures, but said Chloé logged double-digit sales growth in 2002 and is expecting the same pace this year. Market sources estimate the brand generates wholesale volume of about $160 million a year and that the business is profitable.

In a rare interview, Perrin suggested that Chloé’s longevity perhaps can be attributed to a woman’s touch. “Chloé, like Chanel, was created by a woman,” he said. “When you look at fashion, the houses created by women seem to last longer. Look at Hanae Mori, or the British designer, Vivienne Westwood.”

While in retrospect Chloé’s earlier styles may read as classic and even a tad dowdy, Perrin, 60, recalled his mother wearing the brand when he was a teenager. “At that time, it was not considered very classic. It was rather trendy,” he recalled. “The more we go into the history of Chloé, the more we realize how young it is.”

Founded by Aghion and Jacques Lenoir, Chloé was credited with inventing the category of luxury ready-to-wear at a time when French fashion was dominated by couture and its copies. Aghion had an exotic background: The daughter of an aristocrat, she was born in Alexandria, Egypt and, as a die-hard Left Bank bohemian, had high-level literary affiliations that included inspiring a character in Lawrence Durrell’s classic, “The Alexandria Quartet.”

She was also a pioneering artistic director in fashion, working with a rotating team of collaborators, some unknown, others superstars. Aghion tapped Lagerfeld as head designer in 1965 (he joined its design team in 1963, and became sole designer in 1972), and he transformed Chloé into one of the most iconic brands of the Seventies, famous for romantic, gauzy blouses and long skirts. The house lost some momentum when Lagerfeld exited finally in 1983 to focus on a rejuvenation project at Chanel with the Wertheimer family. Dunhill Holdings PLC, a Richemont property, bought Chloé in 1985.

A succession of designers, including Martine Sitbon, Peter O’Brien and Guy Paulin, carried on, with Lagerfeld returning in 1992 for a final five-year stint. Complaining Lagerfeld was too busy with Chanel, Fendi and his signature lines, and citing slumping rtw sales, Chloé’s then-president Mounir Moufarrige brought in Stella McCartney, daughter of Sir Paul McCartney and a budding fashion talent, to shake things up.

“The new word was ‘cool,’ and cool was linked to nightclubbing, social life and music,” Moufarrige remembered. “I said to [Stella], ‘Go very rock chick, very nightclubbing.’ It was a gamble.”

And it paid off. Sales multiplied rapidly and Chloé gained fresh currency and media attention. McCartney exited after her contract expired in 2001 to launch her own fashion house in partnership with Gucci Group, and Philo, her longtime assistant, was named her successor.

Frequently front row at Chloé shows, Aghion confessed that many people expected her to take offense to the sometimes racy approach of McCartney, whose collections included skin-tight jeans and T-shirts declaring, “Keep Your Banana off my Melons.”

On the contrary, “Stella brought a lot of youth to the collection,” Aghion said. “The spirit has changed, of course. I have a certain age, now. My style has passed. When I created Chloé I was young and it was a young collection. It should stay so.”

For her part, McCartney said the Chloé experience allowed her to “prove my critics wrong and make my parents proud of me. I arrived at age 25 and because of that, it was a life-changing experience. To work for a Paris fashion house was a great honor and especially to feel that I made a difference.”

Aghion also had encouraging words for Philo, praising her spring 2003 collection and pronouncing her approach “a bit more classic than Stella. She’s very charming. I have a lot of confidence in her.”

So does Toledano, who outlined some of the many projects on Philo’s plate, which range from a fragrance launch with Unilever in April 2004 to watches and jewelry, which are already in development.

Until recently, Chloé’s products were limited to rtw and fragrance. Toledano has expanded the range to include eyewear, footwear, handbags, small leather goods, beachwear and jeanswear. Currently, shoes, handbags and small leather goods account for about 20 percent of sales, “and next year, it will be closer to 30,” Toledano said.

He also widened the geographic distribution: the brand had once concentrated on the U.S., which at its peak accounted for 70 percent of Chloé’s sales. For fiscal 2003, America should count for about 30 percent of volume; Europe, 40 percent; Japan, 10 percent; Asia/Pacific, 12 percent, and the remaining 8 percent from the rest of the world.

Retail is another active front. At present, Chloé operates company-owned stores in Paris, London, Hong Kong, Taipei and New York. Priorities for new locations include Tokyo, Osaka, Milan and Los Angeles. Second locations are also planned for Paris and Hong Kong and franchised locations are expected to open in the first quarter in Seoul and Monaco.

Toledano said the plan is to open about two to three locations per year. For the next fiscal year, direct retail should account for 40 percent of sales. Chloé recently established a subsidiary in Japan and is quickly opening in-store shops in such department stores as Isetan, Hankyu, Seibu and United Arrows. Its fastest-growing market, Japanese sales are expected to quickly double and account for more than 20 percent of Chloé’s volume.

The U.S. also is a priority again. Toledano recently named Ellen Copeman, formerly with Christian Lacroix, as general manager of its American subsidiary, Chloé Inc. “Until now, we have been very low profile,” he said.

“In America, I want to be much stronger. Clearly, we are also going to be very aggressive in China. The Richemont group is strong in China and Asia/Pacific is very important for us.”

“It’s a growing and thriving business,” said Jaqui Lividini, senior vice president of fashion merchandising, communication, at Saks. “There’s something inviting about it. There’s a lot of design integrity in it. It appeals to a younger designer customer who’s not so interested in a head-to-toe look. The brand has found its customer and it has a real point of view.”

Philo confessed that emerging from McCartney’s shadow — and finding her own wings as a designer — has not always been easy. “Every single show and every single day is a learning curve,” she said in an interview. “I learn every single time what works and what doesn’t and what are my personal boundaries.”

Philo said she has had to curb her own whims and said she recently canned an entire grouping for the upcoming fall season, which premieres at Chloé’s show Sunday, because she decided the styles were too aggressive and didn’t suit the brand’s image. “I’m very much designing for the house,” she said. “It’s not all Phoebe Philo.”Still, Philo said she has no problems channeling her creativity to meet commercial expectations. “Nothing makes me happier than when the stuff sells,” Philo said. “It’s the best vote of confidence. To get good editorial and see it sell, what more can you ask for?”

Coinciding with the anniversary festivities is a book about the house, published by Assouline. Containing photos, sketches and commemorative essays, it will arrive in Chloé boutiques and bookstores later this month. But don’t expect Philo to spend too much reading it. She said she’s pored over Chloé’s archives, but finds that they evoke the past, not a bright, young future.

“It was a lot older Chloé, and when I look at it, I don’t relate to it,” she said. “It’s about keeping it light, keeping it sensual and womanly — but it doesn’t have to be floral chiffon.”