The jeweler has teamed with Sevigny and Livia Firth to debut a bag made using fully traceable and certified leather.

CANNES, France — With all eyes turned on Cannes, Chloë Sevigny, eco-campaigner Livia Firth and Chopard’s Caroline Scheufele wanted to leverage the momentum and get together to promote a cause they all believe in: sustainability.

“Everything is the utter excess here, but it’s also a great platform: The press from all around the world is here and there’s a lot of focus on a global scale, people are looking at Cannes. So if we can set an example then we should take that opportunity,” said Sevigny, who was at Chopard’s rooftop at the Hotel Martinez on Wednesday to debut the bag she has designed for the jeweler.

The bag — a charming box style made using fully traceable, certified leather and featuring bold colors and a large leather heart appliqué — was a collaboration with Scheufele and Firth, whose Eco Age consultancy is a long-term partner of Chopard.

The jeweler has so far been working toward ensuring that all the gold used in its jewels is 100 percent fair trade and also unveiled a new series of fragrances dubbed “Garden of Kings,” which features all-natural luxury ingredients like oud asafi.

Scheufele wanted to turn her attention to accessories next.

“When I met Caroline and asked her all my famous questions, I never expected her to revolutionize Chopard completely, inside and out and only five years later to succeed in using 100 percent ethical gold, because no other luxury jewelry company has ever done that,” said Firth, adding that the industry needs more big name brands and global stars like Sevigny to fight in sustainability’s corner. “The most important communication tool we have is either Instagram or the red carpet. So when you can unite the power of someone like Chloë Sevigny and a red-carpet partner like Chopard, it reaches such a wide audience and helps everyone understand so much more about the issue. It’s all about telling stories and a powerful means of communication.”

For Sevigny, the most prominent message that needs to be communicated is people’s relationship with shopping and consumption. “What we have to address first and foremost is how we think about consumerism and why we desire so much. Why are we all trying to fill this void with more objects or garments, and how can we all consume less?” said the actress, acutely aware that she’s speaking from a position of privilege. “I’m a famous actress so it’s easy for me to say that but I also feel like I suffer from this sometimes. I’ll see something and think, ‘If only I had those shoes I’d feel so much better.’ I think we all need to think about that and be more empathetic and kinder to each other. If we lift each other up we might start needing less material armor to make us feel good about ourselves.”

That’s why, despite her flair for left-field fashion and countless opportunities to work with brands or promote product, Sevigny tries to keep a minimalist approach and use her platform for good.

“I try to work with brands I have personal relationships with and ask myself if there’s a real reason for us to be putting more product into the world,” said Sevigny, who has previously created a pair of frames for Warby Parker, which have just been relaunched given the high demand, and a lipstick shade by the sustainable label La Bouche Rouge. She said she is also developing a collaboration with Opening Ceremony for later this year.

In the case of Chopard, she was drawn to the brand’s long-term relationship with cinema, its commitment to sustainability and her own memories of glamorous red-carpet moments in Chopard jewels.

“One of my first times in Cannes, for the premiere of this Olivier Assayas film ‘Demonlover,’ I wore Chopard with a Versace gown. I had a guard, it was pretty crazy. It was one of my first real glamour moments in Cannes, so those memories and what the name Chopard means is deeply ingrained in me,” the actress said.

@Chopard #ChopardAccessories #TheJourneyToSustainableLuxury 💄💋❤️📍🎈🧨 Excited to announce my collaboration with Chopard to design and launch a Green Carpet Collection (GCC) bag with a sustainable story.

She looked to vintage styles in her collections and her everyday needs to design the box bag style, which comes in purple, blush pink, black and red variations and features gold hardware.

“This is a very selfish bag I designed. I was thinking about what I want to wear day-to-night and just something very graphic and yellow gold. I’m like a big yellow-gold girl, I wear, like, gold hoops almost every day,” she added.

Sevigny has had an ongoing relationship with the Cannes Film Festival. Last year she was a member of the jury, while this time around she came with two films to present.

“The Dead Don’t Die” — in which she stars alongside Tilda Swinton, Adam Driver, Luka Sabbat and Selena Gomez — marked the opening of the festival. Being more seasoned on the Cannes red carpet, she said she spent a good amount of time reassuring everyone that it was going to be OK. “I became close friends with Luka on set and I love being with Selena Gomez, too. It was both of their first times on the red carpet in Cannes, so seeing it through their eyes was really charming,” Sevigny said. 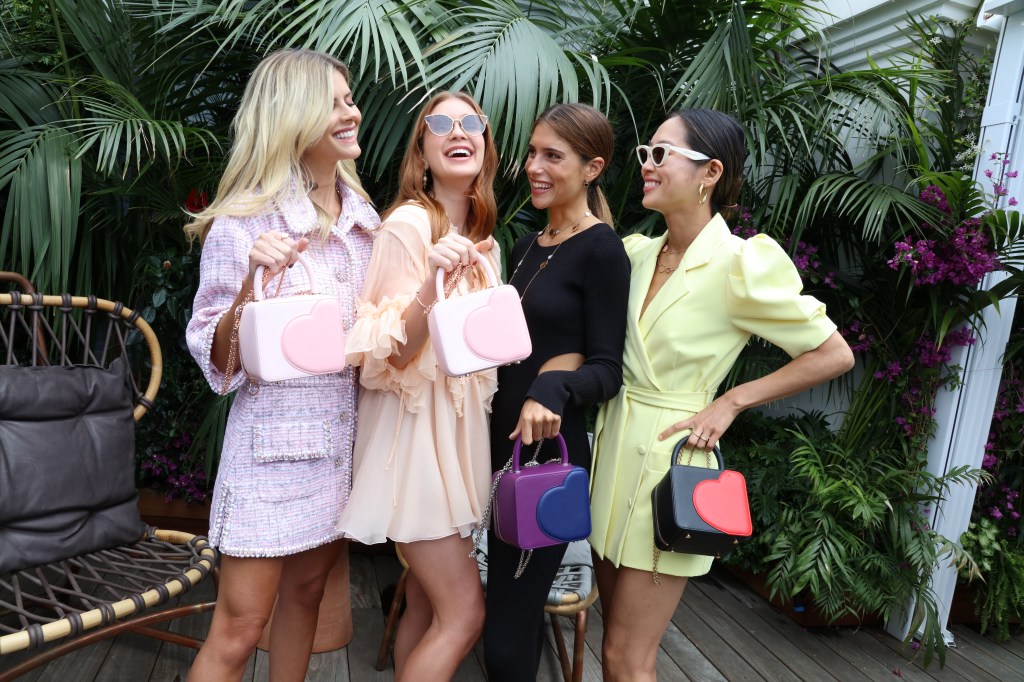 On Friday, she will also present “White Echo,” a short film she has written and directed as part of Refinery29’s Shadowbox initiative, to tell the story of five young women, their relationships to one another and to themselves.

“I want to make films that will encourage women to have more confidence in their pursuits. I think some women tend to be more shy and less self-assured, and I want to help them find the confidence to go for whatever they desire,” Sevigny said.

Next up, she is working on directing her first feature film and promoting her new movie “Queen and Slim,” set to come out in November.

“It’s written by Lena Waithe and directed by Melina Matsoukas, who was behind Beyoncé’s ‘Formation’ video. So I got to work with two strong African American female voices in America and I think it’s really important to get behind that and have opportunities for diversity in storytelling.”