One of the invitations to Chloé's fall 2020 show, featuring art by Rita Ackermann.

PARIS — Natacha Ramsay-Levi believes in the power of three: The designer has tapped a trio of female creatives to collaborate on her fall 2020 Chloé show, to be held in Paris on Feb. 27.

New York-based artist Rita Ackermann has authorized several of her paintings to be reproduced on clothes and accessories, and the soundtrack will feature Marianne Faithfull reading poems. Meanwhile, the set will include five of Marion Verboom’s totem-like sculptures.

After three years at the helm of the French fashion house, Ramsay-Levi said the time felt right to open up her creative process to other voices, with the intention of embracing a multifaceted vision of womanhood.

“I’m not there to dictate what femininity stands for today. I don’t like the idea of things being fixed. I prefer the idea of perpetual movement, and I think that chimes with the spirit of Chloé as well: staying open to infinite possibilities and embracing the unknown,” she told WWD.

Accordingly, the three artists were chosen for their capacity to reinvent themselves, starting with Faithfull, who has released more than 20 albums over a career spanning 55 years.

“She has always been at the cutting edge. She did not remain the Marianne from the Sixties that everybody knew: she was constantly reinventing her art, which I think is incredibly brave and beautiful,” the designer said.

Faithfull performed at an after party for the house under former creative director Clare Waight Keller in 2014. She and Ramsay-Levi met by chance a while ago on the Eurostar, and Chloé subsequently provided some outfits for the promotional tour of the singer’s most recent album, “Negative Capability.”

For the upcoming show, Faithfull recorded British and French poems from the 18th and 19th centuries to a soundtrack by French musician Jackson Fourgeaud, who performs under the name Jackson and is Ramsay-Levi’s partner. “They all talk about femininity or dance or sensuality — our relationship with our bodies,” she said. 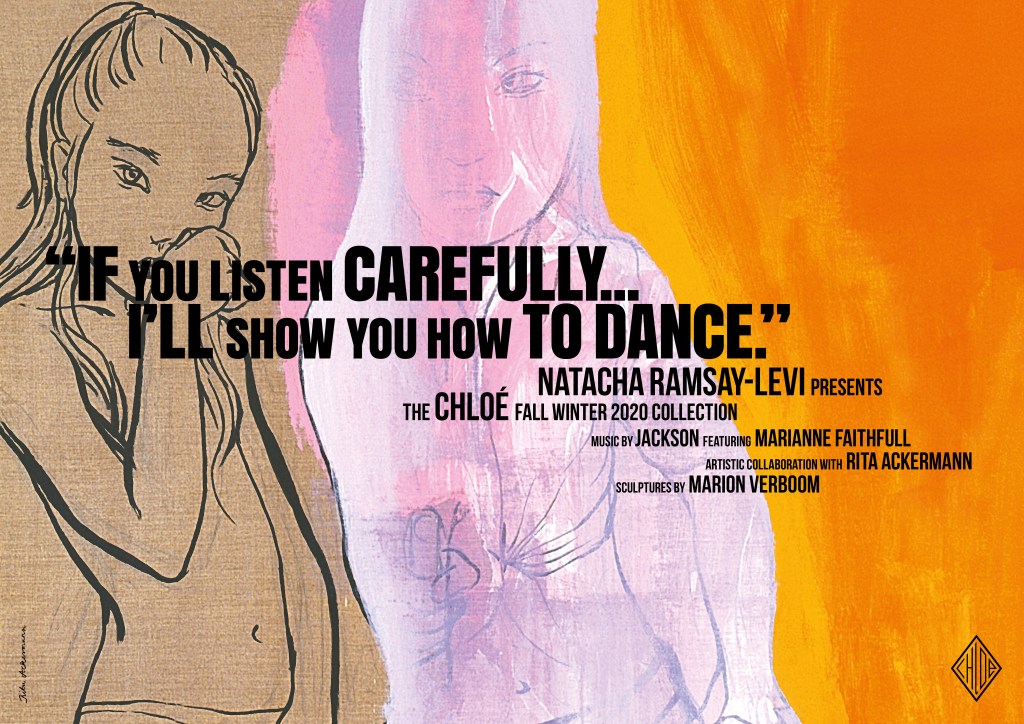 One of the invitations to Chloé’s fall 2020 show, featuring art by Rita Ackermann.  Courtesy

That ties in with the work of Ackermann, who first came to attention for her drawings of seductive young girls in various states of undress. A mainstay of New York City’s downtown culture and fashion scenes in the Nineties, she remains as current as ever, as evidenced by her recent collaboration with streetwear label Supreme.

Ackermann, whose latest work is on show until April 11 at the Hauser & Wirth gallery in New York City, granted the use of five paintings from the mid-Nineties and early Aughts, which will feature on six outfits, in addition to bags and jewelry.

While the artist has since transitioned to a more abstract style, Ramsay-Levi said those early figurative works translated best to fabric. “It’s like a fan dress, similar to a rock T-shirt featuring the name of your favorite band,” said the designer, who has known Ackermann for years. “I got the idea because my teenaged stepdaughter, who is 15, had a tote bag with one of her drawings printed on it.”

She has borrowed the title of the show — “If You Listen Carefully…I’ll Show You How to Dance” — from one of the paintings. Guests will receive one of three different show invitations styled like film posters, featuring details of Ackermann’s art, with a matching metal and enamel pin inspired by her work.

Verboom, meanwhile, is no newcomer to the Chloé universe. Ramsay-Levi featured some of her work at the Chloé show space for her debut in 2017, and subsequently tapped the sculptor to help design a pop-up space and store windows at Selfridges in London.

Verboom is known for getting hands-on with materials ranging from cement to plaster, acetate, brass and, more recently, resin. “I love the way she defies archaic representations of femininity. She brings in elements of architecture and references to votive offerings from different cultures to create these multilayered composites,” she said.

Ramsay-Levi said the collaborations reflected her growing sense of ease at the helm at Chloé, as well as her recent move away from thematic shows and advertising campaigns toward a more personal, timeless approach to collections.

“It’s been three years,” she said. “I’m more comfortable delivering more clearly the messages I’ve always had inside of me.”

That includes shutting down speculation, relayed by a French web site, that she might be leaving the house, following the arrival of Riccardo Bellini as chief executive officer last December. In a pointed Instagram post last Thursday, she wrote: “Can’t believe it’s been three years already, looking forward to continue the story further!”

Speaking to WWD, Ramsay-Levi dismissed the rumor. “Everything is fine. I’m very, very happy about the arrival of our new ceo. I think he’s very happy also,” she said. 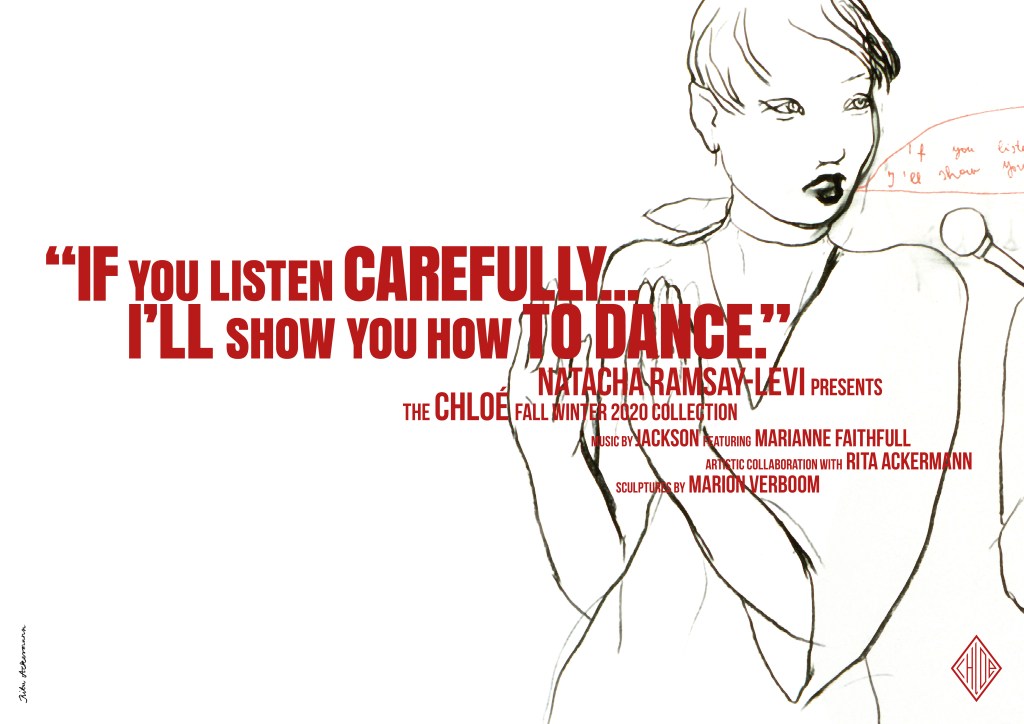 One of the invitations to Chloé’s fall 2020 show, featuring art by Rita Ackermann.  Courtesy