The Taiwanese designer behind the brand Poesia has just opened her first store in Shanghai and is focusing her attention on the Chinese market. 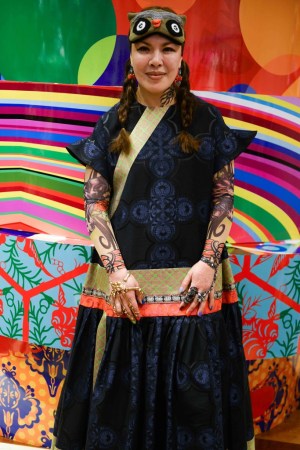 SHANGHAI — For designer Chris Chang, business in China is an act of balancing identity.

The creative mind behind eight-year-old Shanghai-based fashion brand Poesia, which just opened its first store here, said she wants her label to be seen as both international and “homegrown.”

“It is definitely a Chinese brand,” she said. “Everything is made here. We are definitely positioned as a Chinese brand. I think it works better now than two years ago. Now the perception of Chinese brands and Chinese designers is much higher than it was two years ago. Chinese consumers are looking for something unique. The blind consumption of designer goods and luxury brands is really cooling down a lot.”

Chang, a graduate of Parsons the New School for Design, worked as the general manager for Prada in her native Taiwan before launching her own brand in 2006. She started out in children’s wear and the designer saw international success right away, landing orders from Barneys New York and Neiman Marcus. Then, in 2009 during the financial crisis, overseas orders declined, and Chang decided it was time to focus on China where she has design studios and production facilities. That same year she shifted gears from children’s to women’s.

Her designs feature an explosion of bright colors and ornate materials, patterns and silhouettes sourced from locales like Mongolia, Tibet and Yunnan, a province in southern China. Her clothes have a feminine quality that is both glamorous and eccentric and wouldn’t look out of place at the opening of a contemporary art exhibition. Retail prices range from 2,500 renminbi to 12,000 renminbi, or about $400 to $1,940 at current exchange rates.

“Colors represent life, and I do clothes full of life and energy. Colors are the best way to show that, and I can find inspiration for that from minority costumes. I don’t know when it started. It may have to do something with my Peruvian ancestry. It is not very Chinese to be so obsessed with colors and patterns. I am a maximalist,” said the designer, sporting a patchwork dress and a knit owl headpiece to her store’s opening party last week.

The 700-square-foot boutique is located in the Jing An Kerry Center on Nanjing Road, a shopping mall featuring a newly-opened Michael Kors store and tenants such as Burberry, Loewe and Marc by Marc Jacobs. The opening is notable because Chang is one of only a handful of local designers who have secured retail space on the coveted first floor of one of Shanghai’s most prominent luxury shopping malls. Prior to the store’s opening, Chang sold her clothes exclusively out of a small Shanghai studio and did a few trunk shows in Hong Kong.

“Who our neighbors would be is a big issue with me,” Chang said. “Are we being put near Chinese designers? It did not feel right to be among Chinese designers because we do not have the same clientele. We wanted to be somewhere away from that, next to more imported brands. But for a local grown brand to be on the first floor of a shopping center of a mall like the Kerry Center is literally impossible.”

Chang admits it’s a delicate balance for her in terms of both promoting her band’s Chinese identity and seeking customers who still overwhelmingly crave international brand names over homegrown ones. A perception of being too Chinese could have its downsides yet there is a growing set of consumers seeking domestic brands that are unique, according to the designer.

At the same time, the designer said she has had to tone down her theatrical designs to make them more commercially viable. While some Chinese consumers are ready for something a bit more aesthetically extreme, China is still not as edgy as say, London or New York, she argued.

“The women who buy my clothes, they want something that people will pay attention to,” she said, adding that unlike other local designers catering to a 20-something demographic, she is targeting older women who have traveled, have international lifestyles or otherwise more sophisticated tastes. “I have a very specific look – clothes that are about making women look very glamorous. For people who want to be glamorous.”

Speaking more broadly about her designer contemporaries in China, she said she feels their designs still lack a forward-looking flavor.

“Their aesthetics are still left over from the Eighties- from Japanese designers. Dark, drab, intellectualism,” she said. “The brands that are selling better among Chinese designers are the ones doing a little more prints, colors. The market has matured. People are looking for happier clothes.”

For now, Chang said she is content with her first boutique in Shanghai. Eventually she may open in Hong Kong or Beijing, but would like to continue on cultivating a Chinese consumer base rather than expanding overseas. She declined to release sales figures for her brand but said she has almost a 100 percent return rate of customers who have shopped at her studio in Shanghai.