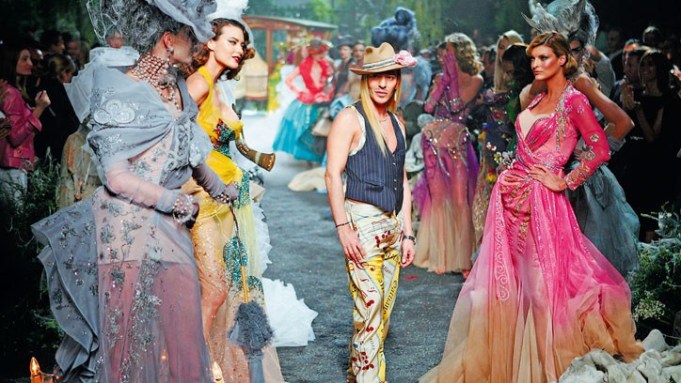 DIOR DAY: Today Christian Dior will present its first Haute Couture collection following the departure of its creative director Raf Simons. The spring collection has been designed by the brand’s in-house team.

To mark the occasion, we’re taking a look back at the house’s most noteworthy couture moments, from John Galliano’s theatrical productions to Simons’ modernist approach.

Simons was known for injecting a dose of reality in the clothes, while still preserving the couture magic. For his inaugural Christian Dior Fall 2012 Couture — documented in the popular “Dior and I” film — he reintroduced tailoring to the Dior vocabulary, showing a series of Bar jackets against a wall covered in flowers from floor to ceiling.

For fall 2014, Simons added his touch of modernity to traditional 18th-century garments. “It felt like a challenge to look further back in history and see how I could modernize certain aesthetics. That is my constant drive, to make it younger and make it relevant to women in their lives today. Always, to be modern,” he told WWD at a preview.

Spring 2015 was another standout where the designer merged Fifties romance, Sixties experimentation and the wild freedom of the Seventies to create a daring collection of Space Age shifts, plastic printed coats and psychedelic catsuits.

By contrast, John Galliano’s Dior was theatrical and, at times, nostalgic. He often referenced the bold colors in René Gruau’s famous illustrations for the house; made frequent use of Stephen Jones’ dramatic headgear; and drew inspiration from frequent research trips to the archives of the Costume Institute at the Metropolitan Museum.

The couturier joined Dior in 1996; “Mr. Arnault is a true visionary to put someone like myself in my position,” Galliano told WWD in an interview in 2007. “Many houses have copied that since.” Galliano’s dismissal marked one of the most dramatic designer flameouts in recent history, robbed fashion of one of its greatest showmen.

Galliano has characterized his shows in 1999 and 2000 as “rupture” moments for Dior, including the so-called “Matrix” couture collection that announced a tough-chic moment, and a hip-hop flavored, Lauryn Hill-inspired show that arrived at the onset of logo mania. He has also sent trailer park babes, bruised boxers and rockabilly types down Dior’s ready-to-wear runway.

In 2000, Galliano presented one of the most controversial fashion shows ever staged: An Haute Couture collection inspired by Paris’ homeless population, specifically the hobos he claimed to observe while jogging along the Seine. According to WWD: “It wasn’t offensive, perhaps because he shows such great affection and respect for his subjects, and even falls in love with them a little.”

The designer’s signature collections have been no less spectacular, ranging from Bollywood beauties dusted in colored powders to a charming, oddball parade of childlike cardboard floats and clothes deliberately too big for the models.