The Palais de la Porte Dorée will house the show in February 2020.

When Christian Louboutin was growing up in Paris, heels were not allowed at the Palais de la Porte Dorée, an Art Deco gem dedicated to African and Asian arts.

Sweet revenge comes in February 2020, when the museum, whose partial restoration was funded by the luxury shoemaker, will house an exhibition devoted to Louboutin’s creativity and his diverse aesthetic passions.

“It’s an open window to my brain,” was how Louboutin summed up the vast showcase, where more than 200 pairs of shoes will be sprinkled among an eclectic mix of art works, furnishings, installations, performance pieces and some fashion items, including crosses and crowns. “The heel is back in the museum in full force, only it’s not only an exhibition of high heels. We have flat shoes, too.”

The delicate mosaics and parquet floors are what compelled the museum to ban spindly footwear back in the day. And its ornamental splendor is what sparked Louboutin’s passion for decorative arts, which would become a key source of inspiration for the future designer.

In an interview on Thursday, Louboutin recalled being awed by the tall doors sheltering one of the museum’s sumptuous salons, its door handles made of jutting horns that evoked the wonder of Africa. The museum’s aquarium impressed him, too. One of his earliest shoe designs was a pump in metallic leather inspired by the iridescent fish in the tank.

“Some of the first influencers were fish,” he said wryly. 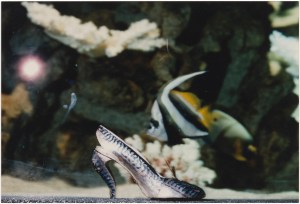 The Mackerel shoes Louboutin created in 1988 in front of the Aquarium of the Palais de la Porte Dorée.  Courtesy Photo

Louboutin started drawing shoes at age 12, and began as an intern for the Folies Bergères and Charles Jourdan, then a supplier to Christian Dior. He was the personal assistant to Roger Vivier before he hung out his own shingle in Paris in 1991.

Included in the exhibition are a pair of boots made out of bark that date back to 1987. “Actually, there’s just one left, the other was eaten by termites,” the designer said with a chuckle. Also never displayed before are “prototypes never fully realized. One is called The Egg,” he said. There are also photos of wedding shoes he designed for Marie de Beistegui when she married perfumer Frédéric Malle.

Olivier Gabet, director of the Musée des Arts Décoratifs in Paris, is to guest curate the Louboutin exhibition, which he said will showcase the shoe guru’s “deep, very original relationship with the decorative arts.”

Spread over almost 14,000 square feet, the showcase is organized thematically, “like a succession of theater stages,” said Gabet, describing one space devoted to the craft of shoemaking, and another a “treasure room” for objects and artworks collected by Louboutin. 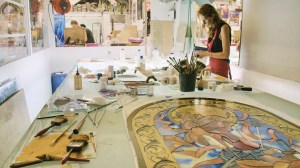 In fact, Gabet draws a parallel between Louboutin’s vast love of beautiful things — from architecture and gardens and dance performances to his frequent travels to Egypt, India and Africa, which he pours into his footwear designs — and The Palais de la Porte Dorée, considered a gesamtkunstwerk, or a “comprehensive artwork.”

“He’s a living guide to that museum,” he marveled.

Constructed for an exposition in 1931 dedicated to France’s colonial possessions, it currently houses an immigration museum and a tropical aquarium.

The Louboutin showcase is billed as the first of a new program of events devoted to contemporary creation.

Gabet said he expects the exhibition will be popular, given Louboutin’s fame — and the fact that fashion is “very universal.

“Very often, some people will enter a museum for the first time in their life for a fashion exhibition,” he said.

The Louboutin expo is being sponsored by Nordstrom Inc.

Pete Nordstrom, co-president of Nordstrom, called Louboutin an important partner and friend to the retailer for many years, adding that “we are proud to support an exhibition that celebrates his creative vision as both a designer and an artist.” 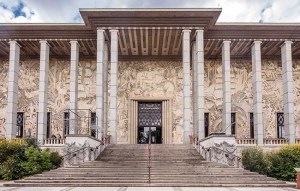