Christian Siriano Has a Clue In Connecticut

The designer invited 80 guests to socially distance at his Connecticut house to close the strangest fashion season ever. 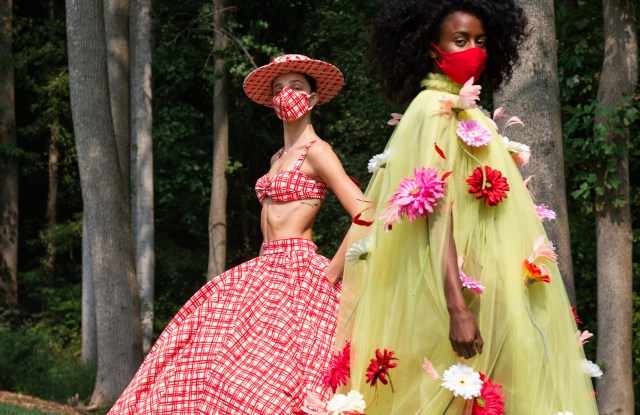 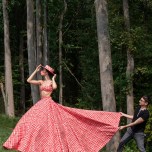 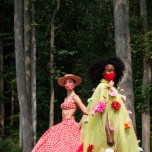 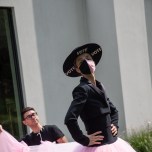 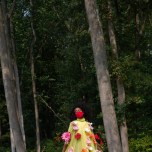 You were expecting discretion?

Not from Christian Siriano. Not now when, he figures, fashion is in such a state of depressed disarray, why not indulge in some serious feel-good escapism, all flowered, fluffed and out-to-there?

Today, Siriano will close the official New York Fashion Week calendar with a live show, and, if ginghams, comic book prints, big florals, bigger ballgowns and a sexpot get-out-the-vote dress are any indication, it should be a festive, over-the-top extravaganza — an extreme counterpoint to the COVID-19 doldrums, which is the point. “I approached it as, with everything that’s happened, let’s just do fantasy here,” Siriano said during a preview on Wednesday. “I wanted to do things that are really special and textural and visually impactful. Hopefully everybody will escape for 20 minutes and feel a little bit like they’re in another place.”

In fact, those attending the show will be in another place, one far removed from both NYFW’s old normal center of activity, lower Manhattan, and its “new normal” center, your chair/sofa/bed and device screen. Siriano has invited a whopping 80 guests (things are different in Connecticut), who will take in the show amidst the glorious backyard greenery of the designer’s ultra-chic house in Westport, its 6,000 square feet of Cubist precision a striking contrast to the area’s prevailing traditional charm. (That Siriano bought the house in January, moved in April, and furnished it fully and exquisitely while under quarantine — and while designing a highly labor-intensive collection — boggles the mind.)

Guests will settle into individual chairs atop individual circle carpets, each of which will be set with one of the huge picnic baskets that had just arrived. “People are coming out here. I want them to take something home,” Siriano said.

Despite overseeing the outdoor installation, which still had a long way to go, Siriano was calm and gracious when WWD disrupted his work flow for a chat and a shoot. He took a break from his producer responsibilities to talk about the house, old favorite movies, shoes, bags and the topic that has everyone in thrall — fashion in the time of COVID-19.

VENUE: I thought, “I need a better escape.” The house was brand new. I looked at it in January, and was like, “OK, let’s do it.” We moved in April; it was just wild. It’s great because we’re so hidden back here; it’s a little sanctuary. It’s going to be really gorgeous tomorrow. We’re doing bridges over the pool and there’s an amazing florist coming, and all the seats all the way back. You’re going to get your own little rug with your own little area. It’s going to be really nice.

THOUGHT PROCESS: The idea was to keep all the big gowns, all the fancy and all things that I love making. I thought, sales are crazy, all the stores are struggling, everybody’s struggling. I’m just going to make the clothes that I want to make.

SHOW INSPIRATION: The collection is basically inspired by everything I did while I was in quarantine. These old comic books I found that my mom sent me, I was like, “let’s make a really cool fabric out of this.” And the movies we were watching — “Don’t Tell Mom the Babysitter’s Dead,” “Troop Beverly Hills.” One dress is inspired by the gown where she falls in the pool. And “Clueless.” Alicia Silverstone is one of my best friends. I love her, so there’s an homage to her. Obviously, all the abstract gingham pieces, like this huge, giant ball skirt — it’s just taking that look to the extreme.

CAREER INSPIRATION: At the beginning of “Don’t Tell Mom,” the mom leaves the kids at home with this horrible babysitter who dies, and the kids have to survive all summer long. The girl, it’s Christina Applegate. She’s 17. She lies on a résumé and gets a job at this big fashion company. At the end, they have this fashion show at her home and they do a bridge over the pool. So tomorrow, we’re doing bridges over our pool. I just love that movie. It made me want to be a fashion designer. I had never seen a movie about a designer before.

STYLING: This collection is for fun, to remember that fashion can still be fantasy and dream-like. I wanted everything — hats and cool bags. The bags are a collaboration with this young designer, Valerie Blaise. I love her pieces. Her line is called Vavvoune. We met when I bought one of her bags as a gift for a friend of mine maybe six months ago. I was like, “Let me reach out to her.” Once we spoke, I said, “Well, let’s do something together.”

SHOES: Guess who gave me the shoes? You’re going to die — Sarah Jessica Parker. All of my shoes got stuck in Italy. Sarah gave me her collection.

She just opened her store next to my store. I looked in the window and I thought, “there are some cool shoes in there.” So I said, “let me reach out.” Sarah said, “I’ll be there.” It was amazing. We had such a fun little day yesterday; we did all the little pairings. The shoes go with the collection so perfectly, the colors — it’s kind of crazy. Every piece is perfect — it’s hilarious. I said, “Sarah, how did this happen?”

COVID-19 CARE: Logistically, there was a lot to do. We’ve got the EMTs, we’ve got the police, we’ve got everybody tomorrow. Everybody checks in, so people feel extra safe. I just wanted to do a small show at the house but it’s turned into like the most expensive show we’ve ever done.