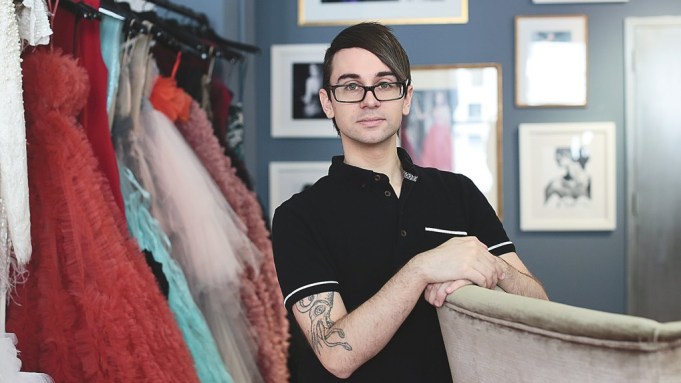 Christian Siriano has always been about building a recognizable image, beginning with his “Project Runway” days — his angular side sweep of dark hair, his use of the word “fierce,” as well as his extravagant eveningwear.

The 27-year-old designer wants to use those signatures to push beyond eveningwear into multiple categories and become a true lifestyle brand. The next step is beauty.

“I started working in the salon when I was 13 with a work permit that my guidance counselor gave me,” said Siriano, who was raised in Annapolis, Md. “It was its own little creative world in a preppy world, which is why I think I was able to be myself so young.” After a brief flirtation with the beauty industry — Siriano launched a color cosmetics capsule collection for Victoria’s Secret in 2008 — he is ready for a comeback. This summer, the former freelance makeup artist and hair stylist signed on to a one-year partnership with Sebastian Professional and will introduce a namesake scent with The Fragrance Group in late 2014. “It’s a little sweet and spicy, and a little bit universal,” said Siriano of his still unnamed women’s scent. “I didn’t want to have a fragrance that would be a trend.”

The Sebastian deal, which will launch officially at his Sept. 7 show during New York Fashion Week, will include product collaboration and packaging design, as well as a styling partnership in which Sebastian will be responsible for all the designer’s hair looks, including backstage at fashion week. “Christian doesn’t draw the line in terms of creativity,” said Reuben Carranza, chief executive officer of Wella North America, the salon division of P&G, which owns Sebastian. Carranza said Siriano will, over the next year, serve as a guest editor on Sebastian social media and will also work closely with the Sebastian education team and judge the brand’s What’s Next Awards in April.

For Siriano, who spoke to WWD from his bustling yet Zen-like office on Manhattan’s 35th Street surrounded by past designs and his upcoming spring collection, inspiration comes from everything.

“My imagination gets a bit overly stimulated every season,” said Siriano, who has interpreted themes like Russian opulence, ballerinalike fragility and nocturnal wildlife in previous collections. “What happens is I work on a collection so closely…then the next season I’m kind of uninterested. I want to move on to something new and totally different.”

Siriano’s upcoming spring collection, which was inspired by a recent trip to Isla Mujeres, Mexico — his first solely for pleasure — will be accompanied for the first time by eyewear he designed.

“It will be island beachy but still refined,” said Siriano. “I’m an eveningwear designer but I want the sportswear to shine.”

With the goal of bridging the couture and lifestyle elements of his business, Siriano, who won the fourth season of “Project Runway” in 2008, opened his first stand-alone store in NoLIta in 2012. There he sells a number of exclusive Christian Siriano branded products, including accessories and home items like pillows wrapped in custom fabric. According to Siriano, the store serves as a glimpse of the multicategory business he plans to build.

“I did it as a test to see if people would be interested in other products [besides fashion],” said Siriano, who has plans to expand his stand-alone door count across the U.S. over the next five years. Siriano’s fashion line is sold through Neiman Marcus stores in the U.S. and about 50 boutiques globally. His home items are currently available at his store, while accessories can be purchased in his store and on his Web site. “Because I started with such a large fan base, I had this [customer] that wanted some type of product of my world,” he said.

To answer that demand, Siriano, who became a member of the CFDA in June, has collaborated on a number of accessible and mass-market ventures. Among them, design projects for LG and O-Cel-O, capsule collections for HSN and Speigel, and an ongoing partnership with Payless, which has resulted in millions of shoe sales.

“I think the whole idea is that now fashion is really about building a brand, a lifestyle, a head-to-toe look — hair, makeup, shoes and accessories,” said Siriano, naming Michael Kors and Vera Wang as designers with business models he admires.

To achieve that kind of Kors-esque multicategory success, Siriano, who counts among his clients Taylor Swift and Rihanna, said he hopes to build his brand through strategic collaborations — for now. “I would like any [upcoming] partnership to [give] me creative freedom and promotes what I’m trying to say,” he said. “It is of course a goal to be able to one day have each category only on the Siriano label, but there is time for that.”

Siriano’s custom bridal and dress business is also booming, he said, with 50 percent of his client base visiting him from the Middle East. According to industry sources, the overall Christian Siriano business, which was roughly $1.2 million in 2010, has grown steadily each year and is now about $5 million.

With so much going on, Siriano said he finds it cathartic to take time to do things like antique shop on the weekend, watch old movies like “How to Marry a Millionaire,” eat comfort food like baked pasta and burgers and, of course, sketch. “I just like to sit at home and sketch things at night,” said Siriano. “I love to look at fabric and trims. That really helps me think of ideas and figure out how a collection should come together.”

Even on his downtime, Siriano seems to find new ways to expand the business; as his evening hobby has now become his newest sales platform. Launched a week ago, Siriano’s “sketch of the day,” which he uploads to Instagram and sells to his 600,000 social media fans for between $35 and $89, has already resulted in hundreds of sales.

When asked what was up next, Siriano, who recently exchanged Saint Laurent engagement bracelets with boyfriend of six years Brad Walsh, was all business. “I think now we are going to really focus on Sebastian, focus on the fragrance, focus on the store. Those three things are my big projects. No [wedding] vision yet. I need to get my collection’s vision to come to life first, then wedding after.”

One word that was noticeably absent from Siriano’s vocabulary was “fierce,” the adjective which followed him like a shadow since his “Project Runway” days. “It was a word I said a few times a day when I was filming a TV show for 18 hours,” said Siriano. “They wanted to create a character and I was happy to go with it, being young and excited about what could come after ‘Runway.’ You only live once and if that one word could help me build what I have today, how great is that.”