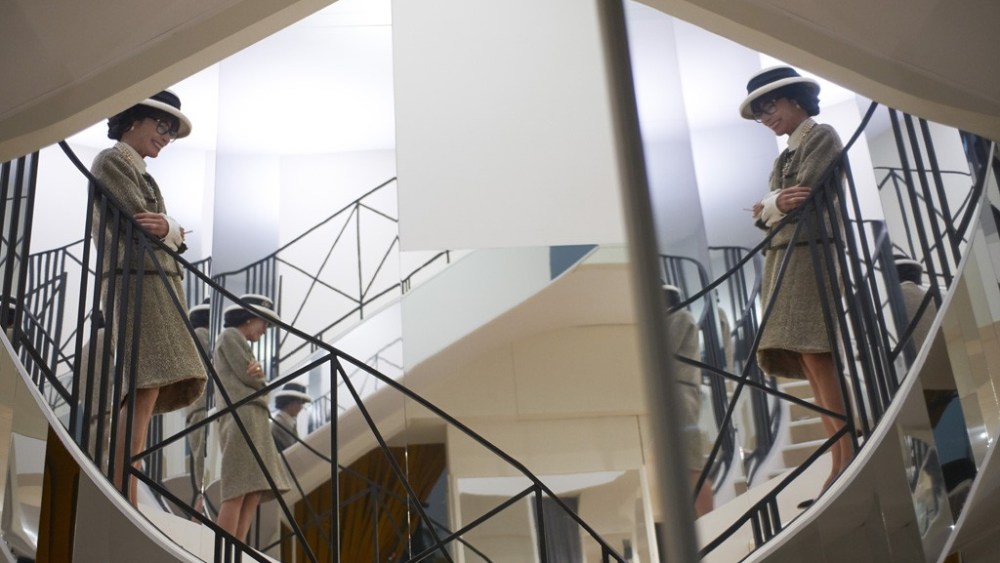 “It’s like ‘Gone With the Wind,’” Rupert Everett declared to Karl Lagerfeld as he arrived on the Paris set of the designer’s latest movie for Chanel.

While the British actor got the period wrong, Lagerfeld’s film — to be presented ahead of his Paris-Dallas Métiers d’Art collection on Dec. 10 in the Texas city — was certainly a big-budget costume drama, recounting Gabrielle Chanel’s topsy-turvy return to the fashion scene in the Fifties.

For the 30-minute Technicolor production, Lagerfeld recreated the designer’s Rue Cambon studio and her mythic salon with the mirrored staircase, where her 1954 comeback collection was greeted with contempt, the crowd filing out in silence the second the last model exited the smoke-choked room.

“Very stiff, and the fabrics were awful,” Arielle Dombasle, portraying a couture client, mutters to a journalist on her way out, exemplifying how Chanel’s return to prewar silhouettes was initially pilloried by the French.

“The French press was beyond horrible to her,” Lagerfeld explained as the cast wrapped the fifth and last take on that landmark fashion show and its chilly reception.

Only one attendee, American Vogue fashion editor Bettina Ballard, portrayed by Lady Amanda Harlech, crept to the top of the stairs — where Chanel always hid during shows, observing the crowd — to offer her congratulations.

“It was a total flop. They hated it,” a crestfallen Chanel, played by Geraldine Chaplin, snipes to a seamstress in the subsequent scene back in her dimly lit studio.

You could hear a pin drop on the set as Chaplin swatted a bolt of fabric and declared her determination to continue designing.

“Tweed, hmm,” she mused, foreshadowing what would become one of Chanel’s signatures: a Tyrolean-inspired jacket, edged in braiding.

A dead ringer for Chanel, Chaplin is mesmerizing as the fashion maverick, a tightly wound bundle of ambition and uncompromising talent, haunted by that flicker of doubt that drives creative people to greater heights.

Everett said he got chills watching Chaplin disappear into the character. “She can play everything, from violent to sweet,” Lagerfeld marveled.

Titled “The Return,” the film ends on a triumphant note when support from stores like Neiman Marcus puts wind in the designer’s sails, and Chanel again hits her stride.

“It’s America who rediscovered her, so this is a thank you,” Lagerfeld said from his director’s chair. “Without America, she would have closed the entire operation.”

Lagerfeld plucked a mix of professional actors, models and members of his entourage to populate the film. Hairstylist Sam McKnight plays François, Chanel’s favorite butler and occasional target of her flirtations.

Model Heidi Mount sought advice from Lagerfeld to speak with a German accent for her portrayal of Marlene Dietrich, who in one scene kneels to kiss the hand of the designer.

Everett plays a garrulous American television journalist who gets the designer to open up about her childhood and aging, among other subjects.

Lagerfeld also enlisted several of his top seamstresses to play in scenes in which Chanel — a burning cigarette clenched between her lips, scissors dangling from a ribbon around her neck — perfected her muslins on her fetish model, Marie-Hélène Arnaud.

“Actors don’t know how to do that. Everyone in the movie connected to dressmaking is really in the dressmaking business,” he said, commenting: “It’s funny to see all the people I work with made up in the Fifties.”

Shot over three days in mid-July at a studio in the northern suburbs of Paris, the film sprang directly from the mind of Lagerfeld, who pointed to his forehead when asked if there was a written script.

Indeed, he parceled out most lines moments before the scenes were shot, allowing improvisations for a more natural effect. Everything else Lagerfeld controlled to the tiniest detail, from the strands of pearls draped on extras and the lighting to the placement of a twirling model during one studio scene.

Lagerfeld said he relished a return to Texas, recalling trips made there in the Seventies promoting Chloé ready-to-wear and perfumes, events that Neiman Marcus did on an epic scale, “with majorettes and everything.”

“Lynn Wyatt is my favorite Texan,” he enthused. “For me, she is THE American girl.”

Lagerfeld said making films is an extension of his passion for photography, and he wouldn’t rule out a feature-length one in the future. If only the pace of filming could match his lightning-fast mind and parlance.

“You know,” he said, seated in front of a monitor as the day yielded to evening, “making movies is about waiting.”