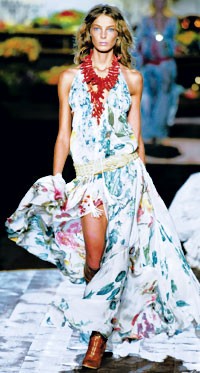 Roberto Cavalli: Instead of overindulging his wolfish appetite for hypersexed fashion — the kind his audience meets with an “Oh, Roberto,” and a roll of the eyes — Roberto Cavalli tried something a little different this season. So, here’s the gimmick: Instead of his fantasizing about seductively dressed women, he conjured up an imaginary Tuscan woman daydreaming of party time in Ibiza, Saint Tropez and Mustique and morphing into a seductively dressed woman. Kind of freaky, but it worked. And though his show still provided one or two risqué moments, as a whole the collection was less aggressive than the Cavalli norm.

Pretty 18th-century botanical prints, popping with lemons and deep green serpents, or nautilus shells and bright coral, came in flouncy dresses and boho blouses with sleeves cut big enough to billow like a ship’s sails. Elaborately crocheted dresses and long peasant skirts added a hippish vibe, as did pure-as-snow minidresses in broiderie anglaise. Of course, Cavalli couldn’t resist a pair of cheeky red crocodile HotPants, but that’s why we love him, that rascal.

After all that surrogate globetrotting, however, Cavalli could restrain himself no longer and sent out evening looks overtly sexy enough to uphold his audacious rep, and those of his customers. These stunners ranged far and wide, from a glamorous gown with red coral climbing up its back to a tiny white feather Tinkerbell dress decorated with crystals and a band of golden leaves. After all, the life of a Cavalli woman is full of festive escapades, whether she’s in Tuscany and dreaming of Saint Tropez or vice versa.

Gianfranco Ferré: Restraint isn’t high on Gianfranco Ferré’s list of priorities, and even when he proposes monochromatic dressing, as he did for spring, you can bet that the look is still plenty dramatic. Reworking some sporty silhouettes — flight jackets, jogging pants, tank tops — he offered a few easy alternatives to the old-fashioned suit. Sleeves were pushed into tough puffs around the shoulders, yet Ferré’s jackets retained a feminine air, discreetly banded with satin ribbon or lightened with pleated chiffon pannels.

But Ferré’s is hardly a one-track mind, and before long he moved away from the suitings to let fly with the moody stuff, including a series of looks made of fishnet and superfine fringe. These were as bold as something that might be worn by a Harley dude’s girlfriend, although more chic, not to mention heavily luxe. Nothing says, “Watch out, boys,” like a snakeskin dress wound Barbarella-style around three rings, or a leopard-print top cinched tight with a bow and worn with a skirt of banded snakeskin edged in black lace.

Ferré is a master when it comes to turning tough, low-brow fashion rich. Take, for example, pants decorated with black leather arabesques or his no-holds-barred mix of animal prints, denim and splashy sequined florals. Piece for piece, and especially where his eveningwear is concerned, the execution and craftsmanship chez Ferré can make even some of the most rogue ideas work.

Etro: This season, it seems as if other designers are starting to see the world through the rose-colored glasses that Veronica Etro has always worn. Bright color and mixes of prints have always been her forte, but for spring, she decided to exercise a little restraint. Her idea of restraint, however, isn’t of the shrinking-violet variety.

Etro looked to Africa and India for inspiration, a bug that seems to have bitten many designers here. She opened the show with graphic ethnic pieces paired with solids, such as a gold brocade jacket with a plain camel knit top and little white shorts, or tribal-patterned jackets paired with black leggings or a full white skirt. Eventually, the color burst forth in full Etro style, as in beautiful chiffon paisley gowns in lavender or powder blue shot with gold thread. Multicolored mirrored vests and little embroidered shrugs exhibited lots of ethnic flair. There was one misstep, though — those “sari-alls,” an asymmetrically strapped overall and sari hybrid which looked awkward and a tad silly.

Moschino Cheap & Chic: Creative director Rosella Jardini hasn’t abandoned the Fifties. Remember last season’s Lucille Ball-themed romp? For spring, the Moschino Cheap & Chic girl headed off on an Hawaiian vacation, the sort of trip that would usually find Lucy in a lot of hot water. But there were no misadventures here, because this island-hopping gal worked the hula theme to sweet effect.

Jardini opened the show with a trio of grannies — and we do mean little old ladies — in Hawaiian tourist gear, strolling down the runway as if they were taking in the sights. So cute. Next came the real show models, kitted out in similar fare. Dresses and tops in floral surfer prints came with huge silk leis stitched around the necklines. Pastel madras plaid was cut into crisp Bermuda shorts, camp shirts, or circle skirts, sometimes paired with patchwork crocheted cardigans. But when this girl tires of all that color and print, she can opt for a safari jacket in khaki or black, or a cute full-skirted sailor dress adorned with oversized rickrack. Aloha!

Philosophy by Alberta Ferretti: This season, Alberta Ferretti’s Philosophy collection had a message: Keep it simple, sweetie. Her easy-going spring line was full of wholesome, modestly pretty clothes. A neutral palette of khaki and sage was spiked with the occasional shot of yellow or kelly green, but for the most part it was a quiet affair. Ferretti’s organic approach meant that simple cotton skirts and dresses were punched out for a lace effect at their hems. The best were Ferretti’s unpretentious party dresses, including one in sage green with a ruby-red ribbon set at the waist, and another in an oatmeal hue bordered with a discreet band of gold. Their guilelessness was designed to let the wearer shine.

Strenesse: Instead of showing on the runway, Gabriele Strehle pared the spring Strenesse collection down to a dozen looks, shown both hanging on a rack and on twirling models projected on a fleet of video screens. The no-fuss presentation had a Teutonic precision. But then, Strehle does seem to be taking the company closer to its Germanic roots. The fall ad campaign, also on display, featured famous Germans Claudia Schiffer and Boris Becker in a series of surrealist scenarios, as photographed by their fellow countryman Juergen Teller.

Then there were the clothes themselves — kooky dresses boasting more froth than a Bavarian barmaid making her way across a crowded tavern with a tray of overfilled steins. Okay, so the house’s official press release said that Strehle’s inspiration came from “Africa’s visual diversity.” But these joyful, zany dresses and skirts — star-spangled, striped, polkadotted and decorated with ruffles, ribbons and eyelet trimmings — looked ready to spin across the dance floor to a nouveau oompah beat.