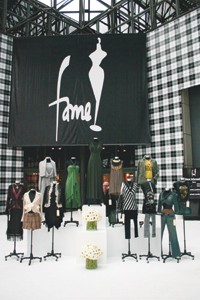 NEW YORK — When it comes to trade shows, New York is the place to be, and organizers are working hard to prepare shows that will energize and entice buyers and vendors.

Elyse Kroll, president of ENK International, said there is a lot of work to be done in the coming months, especially since her usual spot, the Show Piers, will be unusable due to construction. “At the Piers, they are renovating the passenger ship terminals, which will be great for us since they will be much nicer when they are finished,” Kroll said. Until then, Intermezzo and Accessorie Circuit, to be held Aug. 6-8, will move to the Jacob K. Javits Convention Center, which Kroll said she chose because of the generous amount of space and the success she had with the Children’s Club show there.

For Fashion Coterie, Sept. 19-21, things could get more complicated, since renovations at the Show Piers will still be going on. “We will be showing at Piers 94 and 92 at Coterie,” she said. “Since we will need more space than that, we will also be showing at Javits. It’s taken a really long time to get this all worked out, but in order to get buyers to and from the Javits, we will be having a shuttle service running every 20 minutes.”

Kroll mentioned that she will run the Clear show, beginning Sept. 18 at Gotham Hall, one day earlier than Coterie so buyers have time to shop both shows. She said the Sole Commerce show, which runs with Coterie, will be expanded with a large presence from Brazilian shoe designers. ENK will showcase a section for Korean designers at Coterie for the first time.

“Right now, we are working on upgrading the furniture to decorate the shows,” said Kroll, who was en route from New York to Milan. “I’m going to check out some Italian designs that will add to the whole experience.”

Barbara Kramer, co-founder of the Designers & Agents show, said she is getting ready to make a big presence with her New York show. Since D&A began in Los Angeles and expanded to include a New York show just a few years ago, Kramer said she and business partner Ed Mandelbaum have been working to specialize their New York event for the East Coast.

New to the show, which will take place Sept. 17-19 at the Starrett-Lehigh Building, will be a special section reserved for 12 Brooklyn designers. “Brooklyn has so much great young talent, and I really believe they deserve to be recognized,” Kramer explained. “So many of these artists live in Brooklyn because it’s more affordable than Manhattan, so it really has just become this new frontier of design and creativity.”

The section will be complemented by a soon-to-be-named Brooklyn DJ and work from local artists. “It’s going to be a great new addition,” Kramer said. “We really want it to capture the feeling of Brooklyn, which is important to get the point across.”

Britton Jones, president of Business Journals Inc., producers of the FAME, Moda Manhattan and AccessoriesTheShow trade shows, is optimistic about the season.

“In May, we achieved record-breaking success,” Jones said, “so we are expecting this coming season to be busy, as well.”

Jones said the company is making a big push internationally, which is beginning to pay off.

“For the first time, we attracted buyers from 102 different countries,” he said. “Previously, it was only about 50 countries, so it was quite a jump for us internationally.”

Jones said the company is investing a lot of time and effort in marketing overseas.

“We are doing a great deal of marketing, building a network of reps around the world,” he said. “We want to get the message across that New York is the fashion capital of the world, and they have to come here to grow their businesses.”

Jones said that for the next batch of shows, which will be held at the Javits Center Aug. 6-8, the company is also working on improving its audio and visual installations, which will showcase and sum up the trends at the shows for buyers.

In addition, the company is working to launch a September edition of Moda Manhattan. While the dates for the show are not set yet, it will be held at the Metropolitan Pavilion.

“Both buyers and vendors who show at Moda have been asking for us to address the September market for some time,” Jones said. “We just haven’t been able to find a venue large enough to make a big impact until now.”

SODES/FFPAPF, producer of The Train trade show, just announced it will launch a new ready-to-wear and accessories trade show, Platform 2, which will take place Sept. 18-20, at Roseland Ballroom.

Show hours will be 9 a.m.-7 p.m. on the first two days, and 9 a.m.-6 p.m. on the final day. Platform 2, which is a juried show, aims to present 60 international bridge and contemporary collections. Roughly 50 percent of the collections will be European and 30 percent will be North American; with the remaining 20 percent of lines coming from Asia and elsewhere.

“We created The Train to meet a specific need in New York and, again, we identified a niche that was not being filled in the market here,” said Jean-Pierre Mocho, chairman of SODES/FFPAPF. “Many companies with excellent design and craftsmanship want to exhibit at The Train, but just don’t fit because their price points are lower than designer. It was really a pity not to be able to introduce them to the U.S. market. We are delighted to now provide a new platform — Platform 2 — especially for them.”

In addition to Platform 2 and The Train, the company organizes several shows throughout Europe. Its initiatives include assisting designers and manufacturers with export development. In France, SODES/FFPAPF manages two shows twice a year: Prêt à Porter Paris and Atmosphere. In September, it launched Living Room as part of the Rooms show in Tokyo.

Nouveau Collective is also preparing for an August show, which will take place at the New Yorker Hotel Aug. 5-7.

The show, geared to a better specialty store buyer, will showcase a wide range of product.