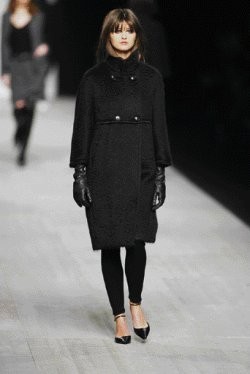 Max Mara and Sportmax: She’s the sharp-dressed woman. That seems to be the m.o. with Max Mara this season, as they sent out legions of girls in city-slick suits and coats, accented by graphic stripes and seaming. A stark white funnel-neck coat that draped loosely in the front, worn over black leggings and towering pumps, opened the show, kicking off a series of Sixties-meets-Eighties shapes and ideas that screamed hard-edge down to the core. Even when things tended to lean towards the soft — floaty, pretty chiffon shirts with extra-long tails, for instance — they were hidden under an aggressive cropped leather bomber or an oversized mohair sweater, with just the flippy shirttails peeking out. Black and white were big non-colors here, as was maxing out the idea of buffalo plaid. Forgoing the traditional hunting red with black, this house choose instead a bright safety orange, interspersing it on knit ponchos, relaxed blazers and extra-large sweater dresses. There were also the odd shots of hot pink — another Eighties perennial — surfacing in alpaca skirts and short jackets.

Sportmax, no stranger to the hard-edge aesthetic, didn’t feel the need to abandon those ideals either this season. They followed a very simple formula: start with something short — a big fall trend — toss in the occasional S&M/Alaia reference and finish it off with a killer, stiletto boot. There also were plenty of graphic shapes and architectural lines here, distilling many of the ideas from the main collection. Young and sexy looks were key, ranging from body-clinging corset dresses that laced up the back to the plethora of hooded anoraks and bomber jackets, loose and oversized, worn hanging off the shoulder and over just the tiniest of skirts. Too bare for winter? No worries— those thigh-high leather boots ought to keep the gams from chilling. As will the great coats this collection offered, from fur-trimmed capes to a tough military-inspired leather trench.

Blumarine: In Anna Molinari’s world good girls finish first — and last — and every place in-between. Her fall Blumarine collection packed in more pretty pink dresses than could fill the closet of any Power Puff princess. No wonder she dedicated the show to her three-year-old grand-daughter, Elisabetta.

Light as fairy dust, out came the party frocks — lacy or ruffled, spangled with rhinestones or sequins — and all with a sweetly saucy Twenties spin. Flapper touches meant chiffon dresses sliced into fanciful fluttering streamers and others finished off with ticklish feathered hems.

Sound a little much? A glucose overdose rendered some looks just a little too-good-to-be-true, and they would look ridiculous on anyone over 21. Still, no one does flirty and angelic like Molinari can. And she knows just what little girls are made of — even if they’re all grown up.

Anna Molinari: Every jour has its belle, and these days no one is considered more belle than Natalia Vodianova. She’s a latter-day Penelope Tree, an appealingly scrawny, polished bohemian with a tantalizing exotic streak. No wonder Rosella Tarabini invited the doe-eyed model to open Anna Molinari, while Vodianova’s husband, the dashing Justin Portman, and bubbly baby Lucas nearly stole the show from the front row.

Tarabini’s fall look also came by way of the swinging Sixties, from her demure furs to a stiff cropped peacoat to a racy silver beaded tank dress. But her take was more modern than Mod. Chiffons, always a specialty at the house, included delicately done minidresses in dusty colors as well as a whole fleet of miniskirts that came paired with gauzy knits.

A couple of fringed flapper numbers aside, it was all perfectly wearable, if not revolutionary. But then, that’s what it is to be of the moment, neither a step ahead — nor behind — the times.

Strenesse: Gabriele Strehle is in a real school daze. Her nostalgic fall collection for Strenesse wasn’t retro, yet it harkened back to an era of homework and homeroom. But then, her shrunken blazers, reminiscent of school uniforms and cut one size too small, button-down shirts and short minikilts made a great look for alumni, too.

Mixing and matching old school checks, stripes and plaids, Strehle’s suits — snug jackets and cropped pants — were boyish, but in the most girly way. Shirts cut in men’s wear fabrics were sweetly smocked across the front. And a touch of punkish panache came via an intense row of buckles that toughened up several minis.

Call it cute, carina, mignon, kawaii. It boasts the kind of classic charm that translates into any language — and into sales.

Etro: Oh what a crazy, mixed-up world it is, especially Etro’s world. Under the direction of Veronica Etro for the past several seasons, the collections have embarked on themes that would suit the well-traveled vagabond. And for fall, Etro was at it again, taking us on a magical excursion from Vienna to Venice, sampling everything from a masquerade ball to the court of “Amadeus,” and tossing it all into one playful melange.

Florals and the house’s signature paisleys abounded in velvet shrugs, brocade jackets, skinny pants and even delicate, printed blouses, which came complete with curtain tassels hanging from handkerchief hems. Ruched damask silk shirts played beautifully like a sonata from Mozart’s heyday. Capes — always good for a little fashion drama — were richly embroidered with colorful Venetian-inspired beads, while sequined flowers were scattered across a fur-lined version. But some of the best ideas showed up in the coats, which are quickly becoming the key must-have item for fall. Using a dusty, old Turkish rug pattern, Etro transformed her coats into luxurious pieces that were scattered with bright jewels and stones, or occasionally trimmed in fox. A carpet-bagger this woman is not.