Liz Claiborne Inc. expanded its brand portfolio to 33 Wednesday with an agreement to acquire Enyce Holdings for approximately $144 million. 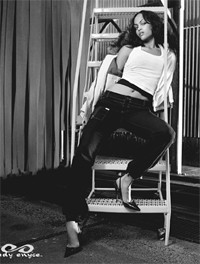 Liz Claiborne Inc. expanded its brand portfolio of 32 by one Wednesday with an agreement to acquire Enyce Holdings from Sport Brands International for approximately $114 million, including the retirement of debt at closing.

The deal confirms a report in WWD on Tuesday.

Consummation of the transaction is subject to review under the Hart-Scott-Rodino Act and other closing conditions. Expected to close sometime during the current fourth quarter, the acquisition is not expected to affect Claiborne’s 2003 earnings per share.

Next year, though, Enyce should be accretive to Claiborne’s earnings by about 5 cents a share. Accordingly, the firm raised its 2004 income projections to a range of $2.70 to $2.77 a share from $2.65 to $2.72. Likewise, Claiborne’s projected sales increase was bumped up to a 5 to 8 percent gain from the 3 to 6 percent rise previously anticipated.

Enyce, which is on track to produce sales of $95 million this year, brings Claiborne a significant presence in the young men’s market. About 84 percent of its sales come from men’s, with the balance in women’s.

Ninety percent of Enyce’s business is done through specialty stores, with the remainder in department stores. While that ratio isn’t expected to change significantly at this point, the women’s side of the business, under the Lady Enyce label, is seen as a growth vehicle.

“The women’s business is very under penetrated,” said Karen Murray, group president of men’s wear at Claiborne, in an interview at Claiborne’s headquarters here at 1441 Broadway. “There’s no reason why the women’s should be as big as the men’s.”

Claiborne, though, has no intention of breaking up the Enyce family.

“We’re going to keep the brand together and have one point of view,” said Murray.

Enyce was founded by its current management team of Evan Davis, Lando Felix and Tony Shellman in 1996 with financial support from Fila. Both Enyce and Fila were bought by SBI in June for $351 million.

Davis heads up the company as president. Its name is a play on the pronunciation of N.Y.C. and is a nod to the label’s New York City roots.

“We would not have done this deal without the team that is here today,” said Murray.

While she declined to go into specifics about the employment contracts of Enyce’s management troika, Murray did note that the three would be around “long enough so I can sleep at night.”

Shellman added, “There is one big incentive [to stay] — this is our baby.”

So what’s next for Enyce under the Claiborne umbrella?

“That’s it. Done. Leave it alone,” said Murray. “They obviously know what they’re doing. They’re a strong team with a strong brand.”

Davis added that, after a period of upheaval recently surrounding the possibility of acquisition and changes within Fila, the team at Enyce is “dying to get back to what we do best. We’re not asking for the world, we’d just like to cook with some gas.”

In an interview Wednesday at Enyce’s 34th Street offices before the deal went through, Davis described Enyce as one of only a few companies in the urban sector “that have done it the old-fashioned way.”

“We came up with a concept, worked hard and paid a lot of attention to the fundamentals,” he said, citing good design, solid distribution and a value for the customer as company strengths.

Davis said the firm also has shied away from association with any iconic names, a practice in which other urban brands have engaged.

“With an icon in front of you, you have more room for mistakes,” he said. Without that room, Enyce was unable to take any shortcuts, such as overdistributing the brand.

After the deal was signed later in the day, Felix added, “We set out to build a brand, not to cash in on the hip-hop cash cow.”

The acquisition harkens back to Claiborne’s acquisition in April of Juicy Couture, in which the firm acquired a growing brand and kept its management team in place to continue what it had been doing successfully, only with the back-end support and guidance provided by Claiborne.

That doesn’t mean nothing will change, though. Life with Claiborne will be one with new growth initiatives. Possibilities include a move into retail, although probably not in 2004, a greater licensing presence and European expansion. The firm also sees nonapparel opportunities, including categories such as handbags, jewelry and fragrances.

“We need to first develop a plan with Evan and his team,” said Liz Claiborne chief financial officer Michael Scarpa. “We can help them, hopefully, source their product better.”

“We look forward to working with the Enyce management team to maximize their performance and realize their potential within Liz Claiborne,” said Charron.

While this makes two acquisitions this year for Claiborne, which generated sales of $3.72 billion in its last fiscal year, the highly acquisitive company is always on the prowl for new catches and is not alone.

Other major manufacturers, including Kellwood Co. and Jones Apparel Group, have been eyeing the urban market as well for possible brand acquisitions.

This summer, Kellwood signed licensing deals for Def Jam University and Run Athletics with Russell Simmons, founder and ceo of Phat Fashions Inc. Sources have indicated that Kellwood is considering an acquisition of Phat Fashions.