Claridge’s Keeps the Faith and Hoists Its Annual Christmas Tree

London's hotels, bars and restaurants have been particularly hard hit by lockdown and a freeze on international travel, but Claridge’s is sticking to tradition, and decking the halls all the same.

LONDON — For more than a decade, there’s been a jam-packed party, a guest designer decorating the Claridge’s Christmas tree, Champagne, mince pies and goodie bags brimming with holiday treats — but not this year.

Claridge’s great Christmas tree reveal was a virtual affair, with the Mayfair hotel letting the world know via e-mail it’s ready for the holiday season — even if it is a more restrained one. London’s high-end hotels, bars and restaurants have been particularly hard hit by lockdown and a freeze on international travel, so it’s a great show of faith that Claridge’s went to the effort of unveiling a specially made tree.

This year, instead of tapping a designer — Christian Louboutin, Christopher Bailey, Karl Lagerfeld and Diane von Furstenberg have been among past tree decorators — the hotel turned to one of its longtime collaborators, Kally Ellis, founder of McQueens Flowers in London, to create the Christmas Tree 2020.

The tree is frosted white, with each snowy branch adorned with swathes of more than 10,000 crystals as well as glass garlands and pendants, meant to conjure the idea of a frozen dreamscape. It stands 14 feet and 9 inches high and sits on a mirrored pool that reflects light around the hotel’s famous black-and-white Art Deco lobby. 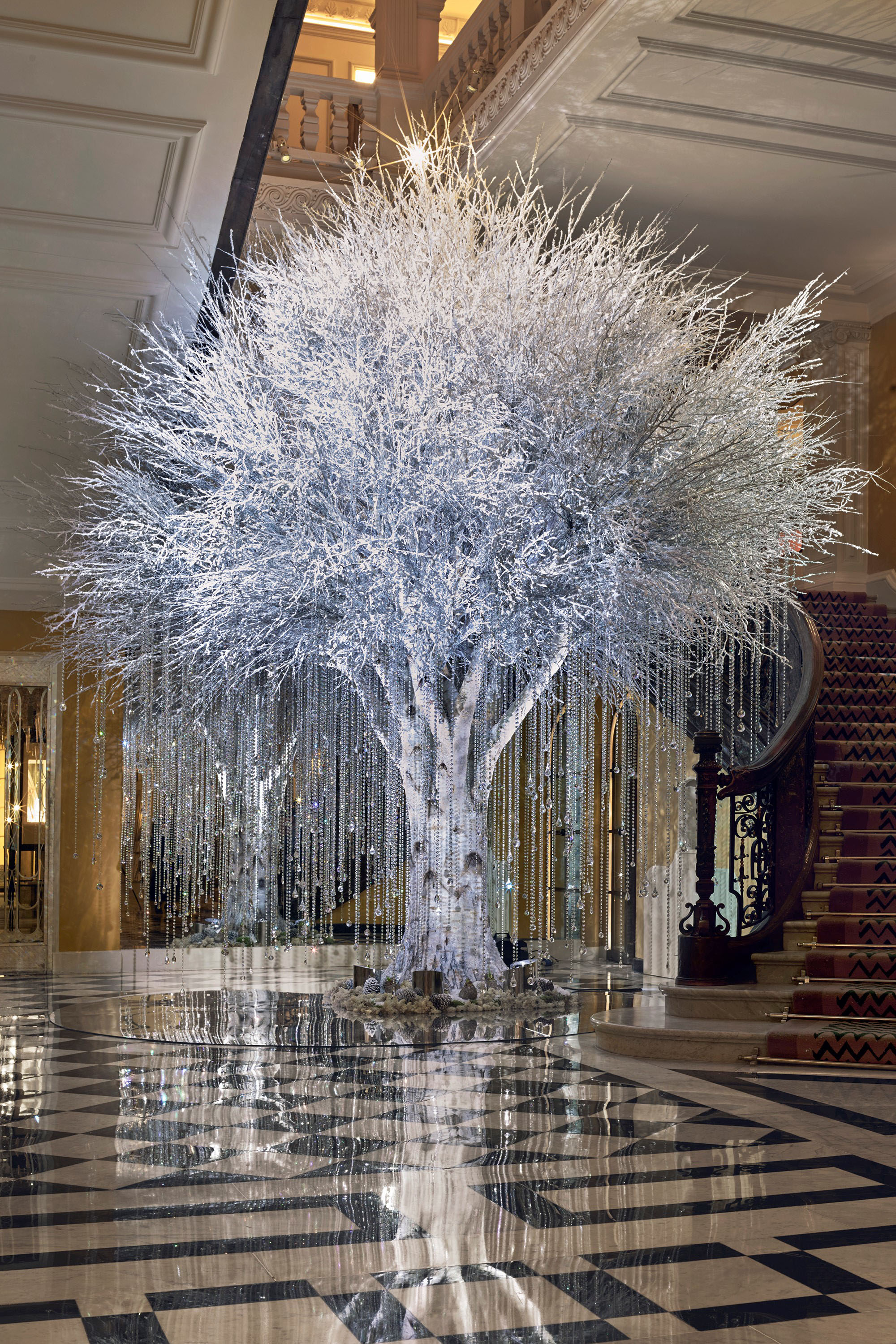 The hotel said it wanted to emphasize its Art Deco heritage and evoke the Roaring Twenties, “a time when people were looking for a symbol of hope and happiness post-World War One. As London looks for a beacon of light amid the trials and tribulations of this year, the message seems very fitting as we once again hope for better times to come.”

Claridge’s co-owner Paddy McKillen said, “We can’t wait to welcome back our much-missed guests and their families. We believe that this year’s tree captures the right balance of Claridge’s magical heritage and positive hope for all of us for the year ahead.”

London has begun bouncing back to life after the second, monthlong national lockdown, which ended last week, and retailers and hotels alike are hoping that local tourists and visitors will spend, and partly make up, for the shortfall they’ve seen so far this year.

According to New West End Company, the eight weeks before Christmas in London normally deliver 2.5 billion pounds in spending to businesses in the West End, the neighborhood around Piccadilly, Oxford and Regent Streets. That spend is set to be reduced to 900 million pounds this year in the weeks between lockdown ending and the start of the Christmas holidays.