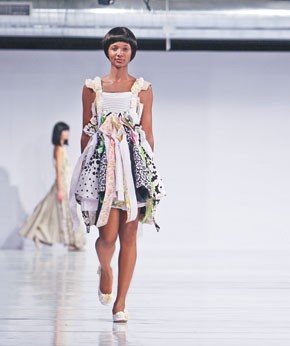 The prevailing mood at New York’s Pratt Institute was decidedly commercial, though the designs themselves ranged from uptown tony, as in this gown from Victoria Lane, to downtown edgy.?????????????????

Welcome to The Dollhouse

Not all graduating seniors have commercial currency on the brain. The fashion students at the School of the Art Institute of Chicago, for instance, opted overwhelmingly for the conceptual in their designs. Case in point: Min Jeong Ko, who spliced together children’s dresses — 20 in front; three in the back — for the whimsical baby doll here, inspired, she said, by a young girl’s armoire.

This year’s fashion school commencement shows are quickly turning into a busy collections season of their own, featuring some great-looking clothes. At The School of the Art Institute of Chicago, seniors were inspired by everything from homelessness (Mi Ri Uhm) to the mythical Russian figure Baba Yaga (Sarah Newman). Especially notable were Rachel Frank’s take on Dante’s “The Divine Comedy” — with Pride embodied by a slinky dip-dyed gown — and Jessica Grate’s lushly embellished lineup influenced by a recent trip to India. Before the show, the audience also got a look at the school’s new 25,000-square-foot design space, the Sage Studios for Fashion Design.

The prevailing mood at New York’s Pratt Institute was decidedly commercial, whether it was uptown tony, as in Adrianne Waite’s collection of dresses dubbed “42nd and Lexington,” or downtown edgy, like Emily Kellerman’s rocker look. Yamel Mendoza, meanwhile, received a number of awards for her lineup of sleek eveningwear, among them the Merrick and Lillian Pratt Best of Show.

Here, some of the top looks from the two schools:
The School of the Art Institute of Chicago
New York’s Pratt Institute