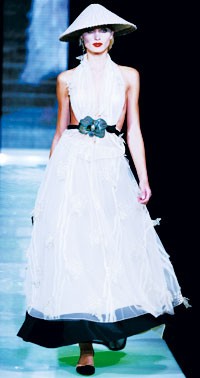 Giorgio Armani/Emporio Armani: Megabrand or fashion brand? It’s a dilemma faced by only the rarified few, those designers who have achieved major fashion influence and over the years layered on the armor of explosive commercial clout and parallel longevity. Giorgio Armani grapples with the question season after season. If he chooses to flex his megamuscles, he might be accused of being dull. If he wants to flaunt his fashion side, the results can look forced.

There is no question that Armani makes fabulous clothes. He started to do so under his own name 30 years ago, and has delivered brilliantly ever since, developing a distinctive aesthetic, one that long ago came to represent not only his own power, but the power of the women who wear his clothes — and not just in the time-warp sense of the power suit. Rather, Armani’s clothes — whether suits, separates or glorious eveningwear — act as conduits for the wearer’s own sense of confidence, her sense of self, belonging at once to her and the designer in equal measure.

This is a reality of which Armani has long been proud, as he should be. So anyone present at either of his two shows this season, the Giorgio Armani and Emporio Armani collections, could not help but wonder why somewhere along the way he abandoned his long-held notion of runway veritas. Because in truth, it’s difficult to imagine the woman who would wear many of these looks as presented, especially in the case of Emporio.

That said, for spring, Armani showed a lot to love, starting with the signature collection. First, one had to get past an unfortunate homage to Elsa Schiaparelli in countless shell-shaped turbans, no doubt intended to hammer home the show’s title, “Shocking.” So ditch the shocking chapeaux and bring on the small, fitted jackets with oh-so-girly peplums; the long, fluid skirts, tiered and banded in ribbons or crystals, and the dresses in joyful floral prints. In his program notes, Armani cited “many cultural conceits and references,” particularly from China. While some turned up in Chairman Mao’s Cocktail Hour pajamas, others were more subtly rendered in rich embroideries and Confucius border prints. As for evening, Armani makes some of the most glorious dazzlers anywhere, inclusive of couture. This season offered its share of spectacular moments, albeit too often under the shade of molto peculiar coolie hats. These came in a group of dreamy, variously embellished white frocks and a pair of killer diamanté mermaid gowns.

At Emporio, which drew heavily on an Indian inspiration, the glories were more difficult to uncover. That’s because Armani went even more accessories heavy with bizarre spats-cum-legwarmers, a fishing hat-turban-baseball cap hybrid and an oft-repeated “Let’s Get Physical at the Taj Mahal” Olivia Newton-John headband. Factor in endless layering and especially the flap-at-the-hips breezy jodhpurs, and it’s no wonder that the good stuff — charming jackets, nonchalant dresses, intriguing embroideries — had to fight for acknowledgment.

All of which is plenty frustrating. The richest, most successful, most highly distributed designer in the world achieved that status first and most essentially on the merits of a razor-sharp vision that he translated into fabulous, wearable clothes, and only secondarily on the strength of his business acumen. Why not take his two-per-runway events each season to flaunt that reality? If Armani would ditch the nomadic sojourns, odd headgear and odder pants and show a collection stripped of all artifice, his audience could refocus on the kind of clothes he does better than anybody else: chic clothes that infuse elegance with sporty ease.

Perhaps a well-chosen, top-tier stylist is the answer, the kind from the outside who shows up with an opinion and an alternate source of income. Because it is incomprehensible that every member of the small army of young assistants who joined Armani for his post-show bow at Emporio really thinks that what appeared on the runway there, or later in the signature collection, is the finest rendering possible of the legendary Armani aesthetic.

Pucci: There’s no mistaking Pucci. The brand’s powerful prints are deeply rooted in fashion’s collective unconscious. They’re splashy, sexy and deliver a booster shot of joie de vivre to clothes built for a good time — going to parties, hitting the beach. Just like the best of times, however, that fun has to end sometime. The beginning of a Pucci show can put a fashion lover in a bright mood, like this one did. But if all those giddy prints are left unchecked, after awhile, they can really start to work the nerves.

For spring, Christian Lacroix took a straightforward, sporty approach to daywear, sending out those famously pinwheeling prints in fast-and-furious succession. Within the kaleidoscopic mélange were printed cropped jeans, a printed trenchcoat, a slinky jumpsuit and on and on. A few cleverly appliquéd items provided a little respite while still hinting at the house signatures. For evening, Lacroix took things a notch brighter with floaty dresses cut in Day-Glo. A baby-doll number with jeweled straps was best of all, while a plunge-neck gown worked a little Talitha Getty glamour.

Lacroix’s got the upbeat daywear-frothy evening dress combo down. Now, he needs to move things along. At times, this show felt like a forced frolic, one that begged the question, “How many of those prints can the eye take?” There has to be a new way to harness the brand’s power while minimizing the printed matter. When he delivers that special something, the something that will make the Pucci look his own, Lacroix can take the brand in exciting new directions.

Blumarine: Anna Molinari just may be Milan’s biggest hippie, always favoring a rich boho look suited to Talitha Getty, Stevie Nicks or other soulful divas of yore. For her spring Blumarine collection, Molinari turned to the dark continent of Africa. But don’t expect Masai warriors or tribal flourishes. This girl is more the adventurous colonial sort, who’d be happy to carry on her kind of missionary work in Rick’s Cafe.

Molinari opened the show with a series of African souvenir prints. Though cute in their novelty, they were a little too close to Prada for comfort. That misstep aside, the rest of the collection was pure Molinari. Flowering bougainvillea and leopard spots mixed beautifully when printed together on turquoise or fuchsia silk and cut into flowing dresses, either knee-length or floor-sweeping, topped by cropped safari jackets with mirrored embroidery or mosaic-patterned knits, sometimes with leopard-printed fur trim. On the softer side, there were white muslin dresses, all flounced and tucked, or fluttery-sleeved blouses paired with silver paillette skirts, all cinched with Berber belts in antique silver. Molinari called the collection Desert Rose, and what a lovely bloom it was.