From Giorgio Beverly Hills to Camp Beverly Hills to Juicy Couture, there is a long history of fashion brands that wink at — and ultimately export — L.A. culture on the backs of Hollywood stars. The latest one is Cloney. Kim Kardashian posted to Instagram about wearing the brand’s “Kim is my lawyer” hoodie while studying, Hailey Bieber quashed rumors of marital discord in a customized Cloney “Top Gun” “Bieber” hat and Spike Lee sported the brand’s Christopher Wallace (Notorious B.I.G.) birth announcement hoodie courtside at Staples Center in January.

On Thursday, the witty streetwear outfitter, which has 30 retail accounts worldwide, launches its first official collaboration with L.A.’s old-school haunt Dan Tana’s restaurant, with a capsule collection of hoodies and sweatpants, $150 to $185, rolling out at Fred Segal Sunset. For the uninitiated, Dan Tana’s is located in West Hollywood next to legendary rock-‘n’-roll-music venue the Troubadour, and has a red sauce Italian that hasn’t changed in 55 years. (No matter who you are, you’re treated the same; even if you are John Travolta, there’s going to be a wait.) Some of the restaurant’s many claims to fame are that it is where the Eagles wrote “Lyin’ Eyes,” Phil Spector ate his last meal and George Clooney celebrated his Oscars win.

Cloney founder Duke Christian George has an equally only-in-L.A. story. A Pittsburgh native, he came West in the Nineties after winning a male modeling contest, worked as a backup dancer for Britney Spears and then segued into acting. (He plays a reporter in the 2018 Johnny Depp film “City of Lies,” about the murder of Notorious B.I.G., which spawned the idea for that shirt, inspired by a birth announcement T George’s parents made for their friends when he was born.)

Where Balenciaga has elevated DHL, Ikea and other brands, high or low, to in-the-know fashion status, George’s designs are making an impression in Hollywood and beyond. He started his clothing company four years ago with a Coachella-inspired “It’s all about the bands” graphic that Alessandra Ambrosio was photographed wearing, followed up by a misspelled “Beverley Hills Hotel” hoodie inspired by a plot point in the Robert Durst documentary “The Jinx” that the film’s producers embraced.

“We are all a little bit Cloney, which means a product of our influences. Everything I do is inspired by pop culture, takes you back to a certain place, is an inside joke or reference. It’s a cool factor, which means you are hip to it, and cool enough to rep it,” he says over dirty martinis at Dan Tana’s. “I’m a big fan of Dan Tana’s, so I decided to make a hoodie. I wore it, friends gave it to friends (Leonardo DiCaprio being one). I was selling them out of the trunk of my car. Then Dan Tana’s caught wind of it and got in touch, and now we are here.”

“Sometimes I will ask permission, but sometimes if it takes too long, and I will just make it,” he says of “paying homage” to in-the-know L.A. places, a trend that trickled up to the Gucci runway last year with the Chateau Marmont. “You make a little noise in the nicest most respectable way, and people start to wear it, and then the places have no choice, they want to do it.”

With his duds being worn — for or free, he said — by everyone from Elliott Gould to the Kardashians (Kendall Jenner has been fueling romance rumors with Luka Sabbat by wearing a “Sabbat” hat, and Sabbat by wearing a “Jenner” hat), George has never gotten a cease-and-desist, not even from Dan Tana’s. Instead, Prominent Brand + Talent, the licensing agency for the eatery, got in touch about an official collaboration. 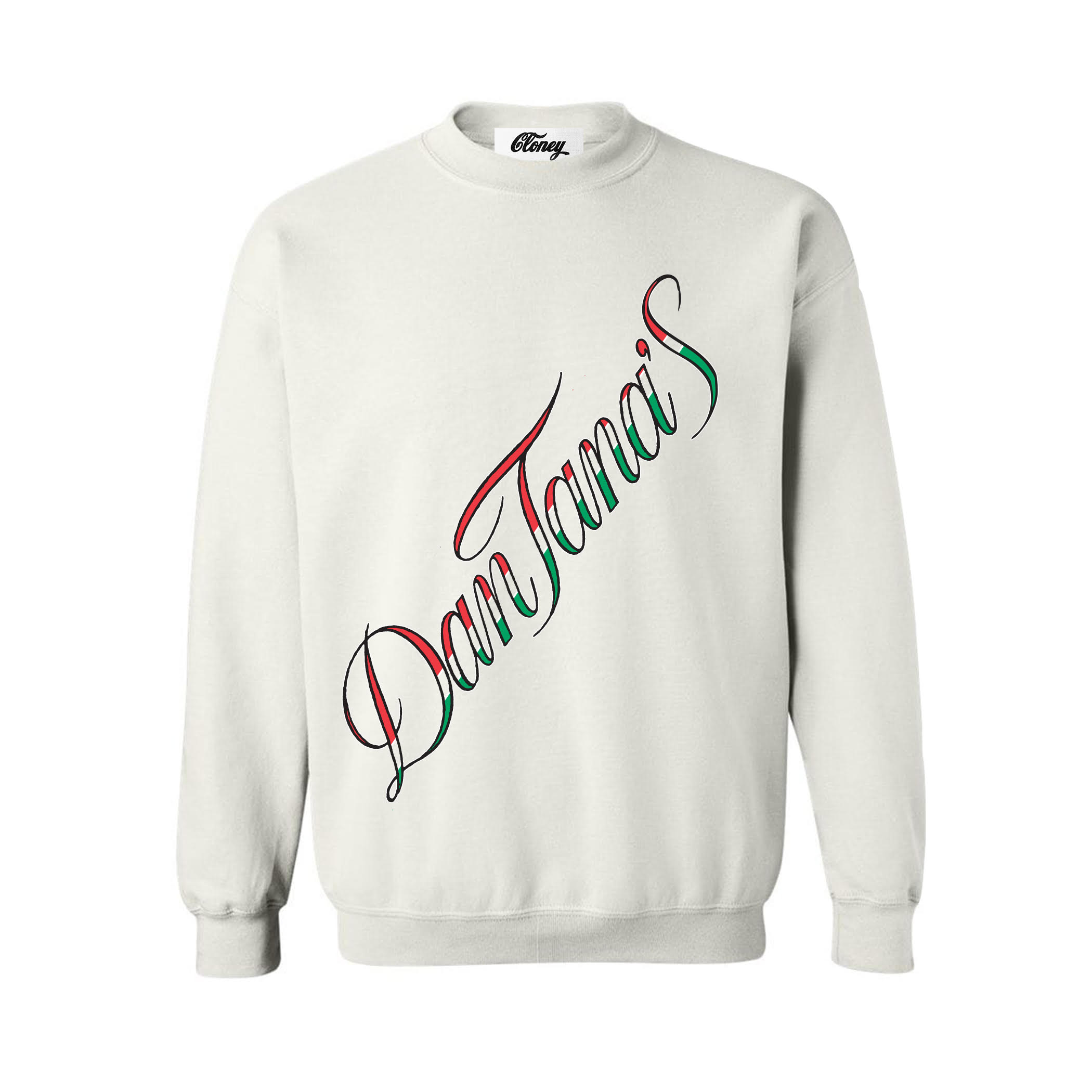 “We call it on-boarding. We figured out a way to make it work,” says agency cofounder Michael Catalano, who was also on hand for martinis, and plans to bring a bit of the restaurant to Fred Segal for the Dan Tana’s a la Cloney launch on Thursday (red leather banquettes, hanging chianti bottles, chicken parm and all).

George even stalked the real Dan Tana, who has since sold the business, on one of his daily breakfasts at Nate & Al’s in Beverly Hills to give him a sweatshirt and take a photo. He says, “That’s the ultimate validation, you create something based on someone and they wear it.”