Close Encounters of the Chanel Kind

By Jessica Iredale and Miles Socha on October 16, 2008
View Slideshow 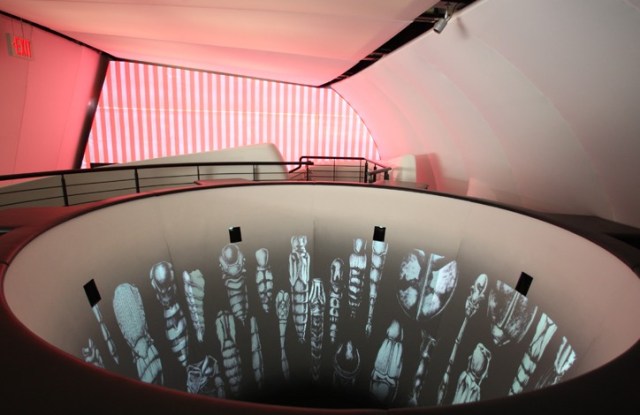 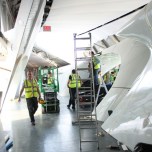 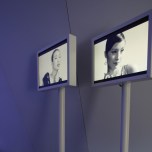 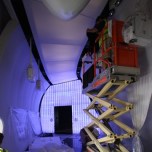 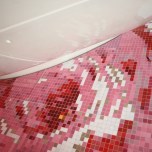 Chanel’s Mobile Art mother ship has landed in Central Park. The futuristic, Zaha Hadid-designed pavilion, which houses 18 modern artists’ odes to the iconic Chanel 2.55 handbag, will open to the public on Monday.

This story first appeared in the October 16, 2008 issue of WWD. Subscribe Today.

There’s prefab, and then there’s prefab according to Karl Lagerfeld and Zaha Hadid. Their Space-Agey designer spin on portable structures, known as Chanel’s Mobile Art pavilion, has touched down in Central Park’s Rumsey Playfield. For the past three weeks, a construction crew has been busily assembling the pavilion’s 700-odd parts for Monday’s opening. They’re familiar with the process; this marks the third time the team has put together and taken apart the gleaming white fiberglass torus, now halfway through its journey round the world, which began in March in Hong Kong, followed by Tokyo, and will continue on to London, Moscow and finally Paris, in 2010.

New York may be the third stop on the trip, but London-based architect Hadid said the project actually began here at the Mercer Hotel, where she and Lagerfeld often stay. “I had seen him there many times, and one time he came and said hello to me. A few months later, the request for this project came in,” said Hadid Wednesday by phone from her London office, where she was recovering from the flu before flying Stateside for the opening. As one of fashion’s go-to collaborators, Pritzker Prize-winning Hadid, who has worked with Louis Vuitton and Swarovski before, said designing with Lagerfeld was relatively low-key. “We had a presentation in Paris, and he liked it and that’s how we knew,” she explained. “It’s a great luxury working with Karl, because he can understand drawings. He’s very exciting to work with, and he’s quite funny.” As for the futuristic structure their relationship built, Hadid said she wanted it to relate to her other work, characterized by organic spatial orientation. “A torus is basically like a spiral,” she said of the exhibition’s home, which looks not unlike a grounded UFO. “You start where you begin, you begin where you end and move from one space to another. It sounds light, like you’re just going to float it around and land it somewhere, but it’s very complicated.”

As much as the pavilion is an architectural marvel, it’s also a modular dwelling for modern art. In fact, the entire project was conceived as a celebratory event for the 50th anniversary of Coco Chanel’s quilted 2.55 handbag, launched in February 1955. Once inside the space, visitors meander through specially commissioned installations loosely inspired by the 2.55. Yoko Ono, Blue Noses, Sylvie Fleury and Lee Bul are among the 18 artists whose works are on display. A tour of the site on Tuesday night saw Bul and Fabrice Hyber’s work nearly complete, while video installations by Subodh Gupta and Fleury’s oversize handbag were still marked by signs that read “Watch Out Art Works.”

Since the pavilion was designed to be packed up as is and taken from place to place, the main news in New York is the landscape and how it works with the structure. “In Hong Kong it was under a car park, and in Tokyo it was next to the skyline,” said Hadid. “This is much more related to where all the museums are. You’re basically in a void, the park, and the light quality is very different.” And that will be the New York exhibition’s main difference, thanks to new skylights cut above Ono’s Wish Tree in the central atrium. Much of the rest has and will remain the same through Mobile Art’s travels, which might leave those, Lagerfeld included, who have toured the torus’ previous incarnations in Hong Kong or Tokyo with a little déjà vu. “Normally, I don’t do things several times,” demurred Lagerfeld, who has already attended the Hong Kong opening. “But it is New York.” And he is quite a fan of Hadid. “The beauty for me is the space, the volume she designed,” which, he said, is worlds apart from the white cubes that dominate the contemporary art scene.

Lest the artists’ abstract versions of Chanel’s quilted classic leave fashion fans longing for the real thing, four limited edition 2.55s — red patent, ivory and navy alligator, and a jumbo-size navy patent style, all signed by Lagerfeld — will be available at the firm’s 57th Street and SoHo stores. The bags are priced up to $31,500, while the exhibition is free, although apparently no less a limited edition. On-site tickets are reportedly available daily, but all 23,000 advance tickets “sold out” in 36 hours.