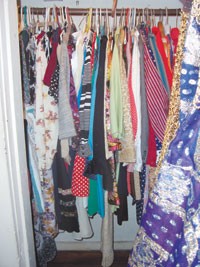 In class, at parties and on the playing field, college students have ample opportunity to express their individuality. Finally free of the school uniforms and parental control that may have placed barriers on their high school outfit options, women on dress code-free university campuses can allow their collegiate style to flourish.

WWD recently delved into the closets of three undergraduate women in places as diverse as Lawrence, Kan.; Stockton, Calif., and Madison, Wisc., discovering that — from vintage white cowboy boots and Forties secretary-style skirts to the latest high-fashion offerings — a college wardrobe need not be limited to sneakers and jeans.

VIVIDLY VINTAGE
For Suzie Johannes, a junior majoring in industrial design at the University of Kansas, dressing differently from her peers can be a blessing. At the very least, it cuts down on sharing. “I tried out the sorority thing for a little bit, and that was five girls to a room, which was nice because I could use everyone’s closets. They didn’t really touch mine because everything looked like a costume.”

Though she now lives off campus, her wardrobe still consists of a “motley assortment of clothing.” Johannes, who works in the theater department’s costume shop and would like to study fashion after graduating, does most of her shopping in student budget-friendly vintage stores, where she bought a favorite pair of white cowboy boots with fringe down the sides and a Pucci-esque dress with a large front pocket.

Her closet is not completely designer-free, however, as she gets hand-me-downs, such as Paper Denim & Cloth jeans, from her lawyer sister. Johannes, 21, also has a Chanel skirt she picked up from her mother’s friend. She wears it inside out to reveal the black-and-white logos on the interior.

As for everyday footwear, Johannes keeps things practical with flats. “When I lived closer to campus, I would wear heels to school,” she says. “As an industrial designer, people tend to make fun of you for wearing heels, because they think they have no function.”

BACK TO BLACK
“I’ve always been slightly unusual,” says Holly Noe, 21, a junior journalism major at the University of Wisconsin. “Coming to college, you think there’s finally going to be some interesting people here, but it’s more of the same, so it’s motivation to be even more unusual.”

The North Face and sweatpant-wearing crowd may be a disappointment to the Wisconsin native, but chances are Noe would stand out on any campus, given her “seraph look” of reddish hair, extremely pale skin and graphic fashion sense. Noe, who finances her wardrobe with summer jobs and weekly freelancing for a local paper, tends to limit herself to mostly black outfits punctuated by one or two colorful items for maximum drama. (A recent ensemble mixed black pants and a cardigan with an army green pinstripe bustier.) Her closet reveals a current predilection for blue and green items, such as a pair of chartreuse square-toed slingbacks with a crocodile print and silver buckle.

However, Noe’s restrained palette does not preclude whimsy, as a pair of Irregular Choice turquoise shoes printed with music notes suggest. “One of my friends is starting up a rock band that I’m going to play violin with, and they’ll be perfect for that,” she says.

The shoes would be equally at home with the feminine silhouette of pencil skirts and cardigans that Noe prefers for her “rock-chick-meets-vintage-secretary look.”

But lest she get too feminine, girly colors will not be making an appearance anytime soon. “When I was little, I wore exclusively pink and purple, and now I can’t stand either one,” Noe says. “I’m sort of working a tiny bit of pink back in, but, like, very mauve, grayish pink.”

DESIGNER DIVA
Thanks to Karl Lagerfeld’s collection for H&M and Isaac Mizrahi doing a Target line, it’s easy to forget that much of this country is unfamiliar with designer names. But University of the Pacific senior Kathleen Sauler, proud owner of a new Louis Vuitton cherry Speedy handbag, has a nearly daily reminder of this. “Everyone’s like, ‘What is that purse?’ No one knows it,” she says.

Sauler’s three closets in her Stockton, Calif., apartment are a veritable accessory department of choice goods: Gucci stilettos, Louis Vuitton messenger bags in monogram and Damier styles, a black Chanel doctor’s bag that she uses as a school bag on rotation with the Vuittons and a pair of “really high, tall platform shoes” from Prada, all courtesy of her mother’s Platinum Amex. A psychology major with a focus on pre-pharmacy, Sauler, 21, keeps things casual by mixing these high-end designers with True Religion and Evisu jeans and “inappropriate T-shirts,” with sayings such as “Tell your boyfriend I say thanks,” that she wears to class on a daily basis.

But even this democratic mélange helps the Sacramento native stand out among the predominantly athletic student body. “Oh, gosh,” groans Sauler in response to a query on the other girls’ style. “They wear logowear. They dress like men. They, like, always have their hair back. They love their Coach bags.”