Coach Builds Legacy With Nod to Past

Coach is launching a higher-priced collection called Legacy, inspired by Bonnie Cashin's work for the brand in the Sixties. 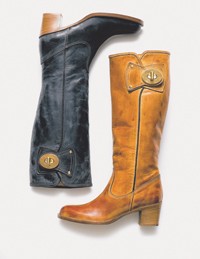 The Coach president and executive creative director is rolling out a higher-priced accessories collection called Legacy that’s inspired by fashion designer Bonnie Cashin’s work for the brand during the Sixties.

Krakoff had been mulling over the concept for a while and tested it out with a handbag called Legacy, also influenced by Cashin, that is currently in stores. The style is designed in brown or bone pliable leather and features outside pockets and oversized, weathered brass hardware.

“We always get these old Coach bags from the Sixties, and we love the way they look — all worn in, with the hardware beat up,” he said. “They were simple and utilitarian, and looked like something that was missing from what we offer.”

There are 20 bags, 20 small leather goods items, 10 footwear styles and two jackets in the Legacy collection, which will bow in Coach’s 214 U.S. stores, as well as in Saks Fifth Avenue and Bloomingdale’s, in October.

The designs are a fresh take on Cashin’s looks and feature an update on her signature brass turnlock, inspired by the closure on her car’s convertible top and used on a range of goods, from handbags to outerwear. The leathers, which include exotic skins like ostrich and alligator, also have been upgraded and are hand-burnished to create slight imperfections and a timeworn feel.

Handbag looks include a simple shoulder bag with a flap closure and pockets in various shades of brown, and a pochette done in a colorful stripe — originally designed by Cashin and updated by Krakoff — and trimmed in caramel leather. In footwear, there are boots, such as a black midcalf style with a chunky heel and turnlock detail at the top, and pumps, like a black leather silhouette with a turnlock detail on the wooden heel and a signature striped insole. Small leather goods include wallets designed in the signature stripe and cold-weather items like hats and gloves. There are also a few jackets.

Retail prices for the collection range from $198 for a purse to $10,000 for The Ali bag in alligator.

The Legacy collection will be advertised this fall in a print campaign and will have an isolated selling space within Coach stores. The firm’s new capsule knitwear collection, produced in collaboration with Lutz & Patmos under the Coach label, also inspired by the Cashin era, will be merchandised with the Legacy collection accessories.

This story first appeared in the May 15, 2006 issue of WWD. Subscribe Today.

“The [collection] has a broken-in feeling,” said Krakoff, who didn’t disclose sales projections for the line, but said he plans for it to be ongoing from season to season. “The [pieces] have an attitude. They are chunky and utilitarian, and mixed with a sexier silhouette.”

Although the line is markedly different from spring’s Coach styles, which include logo bags done in bright yellow and orange ombré or bumblebee appliqués, Krakoff contends he isn’t alienating the brand’s following.

“We are a company that means different things to different people,” said Krakoff. “We don’t think Legacy will abandon [the customer looking for] more playful things. For me it’s always about the mix of those things. There’s always a casualness and chicness to it.”

The company has been on a roll. Coach posted a 34.6 percent jump in net income for the third quarter to $108.8 million. The firm is estimating sales of $2.1 billion for the year ending July 1, an increase of 23 percent from a year ago, and is projecting sales growth of 19 percent to $2.5 billion for fiscal 2007.

The company is also seeking to launch a jewelry collection and a fragrance down the road.

“We’re always evolving,” said Krakoff, adding that a ready-to-wear collection isn’t on the agenda. “For me, it’s fun to jump around to new categories. It keeps us excited and engaged. Never say never, but there’s not a focus on [rtw]. We have so much to do. You can’t do everything well.”