Known for reconstructing vintage clothing pieces, Darren Romanelli is creating a line of 200 pieces inspired by the brand’s famous iconography. 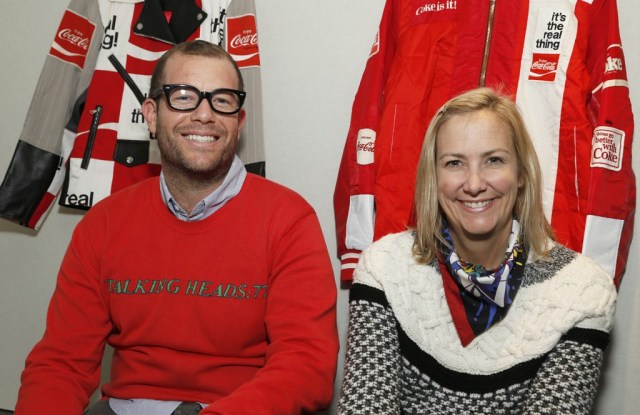 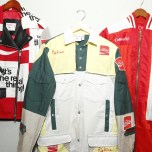 This story first appeared in the October 22, 2013 issue of WWD. Subscribe Today.

Sourced from flea markets and vintage stores around the world, the collection includes a total of 200 pieces of “Coca-Cola by DRx,” including signature bomber and biker jackets, vests, and cut-and-sew T-shirts. It is a unisex line.

Each of the pieces is a customized item stitched together from multiple Coca-Cola garments, including vintage clothing, delivery jackets, workwear, uniforms and pants. The retro finds span a period from the Sixties to the Nineties.

“It’s a healthy combination of hiring sourcing experts to scavenge areas around the world, going to swap meets in Southern California and looking online,” said Darren Romanelli, the founder and designer behind Dr. Romanelli. He’s been working on the Coca-Cola collection, which is produced entirely in Los Angeles, for nearly a year. Romanelli will collect the vintage pieces, sit with them for awhile, combine several in a garment, add new leather and vintage satin linings and source new zippers and snaps. “I take a lot of pride in craftsmanship,” said Romanelli. Every hangtag is made of a bottle opener, as well as a Polaroid of the items that inspired the design.

He also designs a 10-year-old bespoke streetwear brand under the label Dr. Romanelli, where he reconstructs vintage pieces into new, contemporary silhouettes. He sells to specialty stores and works with private clients, including athletes and musicians.

Romanelli said he’s been fascinated with Coca-Cola ever since it was the title sponsor of the 1984 Olympic Games in Los Angeles.

“Darren has a passion and affinity for the brand,” said Kate Dwyer, head of global licensing for the Coca-Cola Co., who was introduced to Romanelli through a mutual friend. The collection will launch today in stores such as Opening Ceremony in New York, Los Angeles and London; Colette in Paris; Fruition in Las Vegas; Unknwn in Miami; NoMad in Toronto; United Arrows in Tokyo, and Juice in Hong Kong and Shanghai. Each store received about eight to 10 pieces of the one-of-a-kind items, and a heavier shipment of the T-shirts. The one-of-a-kind items retail for between $450 and $1,650, and traditional cut-and-sew T-shirts (some in tie-dye) range from $35 to $50.

According to Dwyer, Coca-Cola generates about $1 billion in retail sales through its merchandise, and 50 percent is sourced through fashion. That’s grown from 25 percent five years ago. The company started producing Coca-Cola fashion in the Thirties and Forties and had a sportswear line in the mid-Eighties designed by Tommy Hilfiger for Murjani International. Today, under various licensed deals, the brand’s apparel offerings include tops, bottoms, leggings, jackets and hats and is the largest revenue producer, followed by footwear, including flip-flops and athletic shoes. Other Coca-Cola products include recycled glass bottles, jewelry, key chains, toys, retro tins and furniture.

For spring, Coca-Cola also forged partnerships with Marc Jacobs and Ashish in London.

Dwyer declined to reveal sales projections for the Coca-Cola by DRx collection. “It’s about building brand love instead of driving revenue per se,” she said. The collection will be introduced this evening at New York’s New Museum, which will feature a pop-up gallery of Coca-Cola memorabilia, such as Yo-yos, caps, T-shirts, pins and original soda bottles from the 1800s, along with the new vintage collection. Romanelli will also be screen-printing T-shirts at the event.