NEW YORK — Cole Haan’s accessories rarely evoke Studio 54, but the classic American brand is exploring notions of glam and glitter in its inaugural

Having launched the subbrand with shoes last... 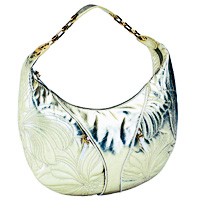 NEW YORK — Cole Haan’s accessories rarely evoke Studio 54, but the classic American brand is exploring notions of glam and glitter in its inaugural

Having launched the subbrand with shoes last year, the Yarmouth, Maine-based firm is now spreading its wings with handbags, due to hit select stores in the spring.

“We have always looked at Cole Haan and G Series as a yin and yang,” Gordon Thompson, executive vice president and creative director of Cole Haan, explained. “The Cole Haan woman is very sophisticated and chic. The G Series is much more downtown and fun. She looks at accessories, shoes and handbags in a much more expressive way.”

Chairman and chief executive officer Matthew Rubel added: “After launching G Series footwear, we gained more insights into an emerging consumer marketplace where there was a void for a design vocabulary that is more expressive and more transcultural in nature. We found that this market place was growing most rapidly.”

While the core brand may take a classic American luxury approach, handbags for the G Series have a Seventies glam rock mood with quilted metallics and bold hardware. The collection consists of 12 stockkeeping units in three groups: Geraldine, Gibbs — named after the iconic Bee-Gees, Barry, Robin, Maurice and Andy Gibb — and Goldhanger.

Geraldine consists of a bucket and tote bag in quilted gold and silver metallic satin nylon and leather. Gibbs features a belt bag and a pyramid bag, available in solid or multicolored metallic leather. Goldhanger is more utilitarian — the satin nylon bags have multiple exterior pockets for such gadgets as cell phones and Blackberrys. But what distinguishes this collection in particular is the unique technical satin fabric that is often used at Nike Inc., Cole Haan’s parent company.

“There are little nuances of innovation, which is one of the hallmarks of the G Series,” said Thompson. “We have engineered a Nike satin that had high durability but a beautiful sheen, and there is mesh on the interior so there is stretching.”

Wholesale prices range from $88 to $150. The average wholesale price point is about $105. G Series bags will have a soft launch at Neiman Marcus, Bloomingdale’s, Saks Fifth Avenue, Nordstrom and Fred Segal in January, with a full launch planned in the fall. There are plans for two to four G Series stores within the next 12 to 14 months, Rubel noted. He declined to gives sales projections, but market sources estimate that a launch of this caliber could bring in $2 million in wholesale volume in the first season. “We believe over time that the handbag business will be larger than the footwear business,” Rubel said.