NEW YORK — Design collectives come together for any number of reasons — shared passions, college camaraderie and, in one instance, even a back-page magazine ad for a stick-on goatee — but they all subscribe to a simple theory that... 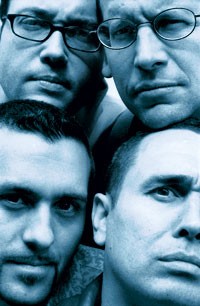 NEW YORK — Design collectives come together for any number of reasons — shared passions, college camaraderie and, in one instance, even a back-page magazine ad for a stick-on goatee — but they all subscribe to a simple theory that two heads are better than one. And three or more are better still.

Meet, then, the boys behind the Newport Beach, Calif.-based label Trovata — John Whitledge, Sam Shipley, Josia Lamberto-Egan and Jeff Halmos, who will show for the first time in New York on Wednesday. They’ll gladly tell you that, yes, four is, indeed, more.

“I think what’s important is the fact that we all started out as friends,” says Whitledge, the creative director of the classic-meets-vintage prepster collection. The quartet’s roots reach as far back as high school, where Whitledge and Halmos met; the others encountered them at college. The four launched a capsule men’s wear collection in their senior year, a mere three years ago, and their women’s wear will make its debut in stores this spring.

Surfers at heart, these boys work as hard as they play. The beach is only two blocks from their office space, but their collection of worn-in blazers and soft Ts seems only to have benefited from their lunch breaks spent riding the waves. They’ve set up a loose division of labor — Shipley, Lamberto-Egan and Halmos are in charge of art, production and sales, respectively — that they consider important to their group’s longevity. They also regard it as key to the success of any collective. “You have to make sure that you have a system in place,” Whitledge explains. “We all have our own areas of responsibility. Otherwise, I don’t think it would function.”

The surf itself might just be one of their trade secrets, because, halfway across the globe, there’s another collective of designers who hang 10 at least as much as they think about hanger appeal. Dan Single, George Gorrow and Gareth Moody make up the trio Tsubi, a Sydney-based label that’s been making waves since its first show at Mercedes Australian Fashion Week in 2001. That year, they sent 250 rats down the runway, and, despite a screen intended to keep them in, the rodents tumbled into the audience. Try that with New York’s Manolo-clad front row. “If you get a chance to do something and entertain people, you should,” says Gorrow. These designers clearly enjoy theatrics, although those aren’t reflected in their clothing itself — jeans, colorful hoodies worn with swinging skirts and flirty halter dresses.

While, on paper, Tsubi consists of just Single, Gorrow and Moody, they insist that their collective is actually much broader than that — it includes all the writers, painters, surfers and musicians they hang out with on Sydney’s northern beaches. Take, for example, the in-store art installation that they did at London’s Selfridges: They flew in 25 of their artist friends to create it. And in March, when Single, Gorrow and Moody plan to open their first concept store in New York, on Mulberry Street, the same Australian contingent will head to Gotham, too. “We all make up little pieces of a jigsaw puzzle that actually forms something that works,” Gorrow says. “Tsubi is bigger than, like, one person. It’s bigger than the three of us.”

Maybe the family that surfs together stays together. But, while shared interests and friendships clearly make for a tight-knit collective, do they make for a smooth ride? Hardly. Talk to any member of New York’s best-known fashion quartet, As Four, and he or she will tell you that it’s like a marriage, not easy and not without its ups and downs. The inspiration, hard work and creativity may increase fourfold, but so do the conflicts, decision-making difficulties and ego problems. According to As Four’s Gabi, the key to a group’s staying power is to “get over yourself.”

Another secret weapon may be distance, which is illustrated by the members of House 33, a year-old label sprung from House Industries, an illustration and typeface company based in Delaware, founded by graphic artists Andy Cruz and Rich Roat. Head to Philadelphia and you’ll find the group’s third member, Jeremy Dean, an art director who has worked for Urban Outfitters and Ecko, as well as for Cruz and Roat.

Then there’s Simon “Barnzley” Armitage, who’s based in London, a former stylist for ID magazine who founded the indie labels People’s Wardrobe and Zoltar the Magnificent. If this group seems unusual, stranger still is the way they met. Answering an ad for a stick-on goatee, Armitage called the offices of House Industries, found that the ad was a spoof, and a relationship was forged.

House 33 has a store on London’s Marshall Street that stocks punk and rock urbanwear. Graphics and distinctive lettering take over denim minis and military jackets as well as the more tailored pieces. “We were tired of seeing mainstream retailers using our artwork on crappy clothes,” Cruz says. “So we cut out the middle man.” And, according to Armitage, the distance between the members of the group is a plus. “The influence in England is different from in the States,” he says, “so I’ve definitely got a more European take, and they’ve got a more American one.

“The fact that we’re not in the same room, driving each other mad, is probably the one thing that’s helping us survive,” Armitage continues. The sole caveat: “gigantic phone bills.”

The team behind Arena CPH, a jewelry line that accessorized the Cat Swanson show on Saturday, is another group adding a new dimension to the notion of a collective. Based in Copenhagen, Arena CPH involves five designers: Line Hallberg, Sophie Teik Hansen and Jo Riis-Hansen, who specialize in fine jewelry; Vibe Harslof, who works in Plexiglas and enamel, and Gabi Humnicki, who does textile design. Mads Roestbjarag, the company’s chief executive officer, who, with Hallberg, founded Arena CPH, says that the idea behind it was to gather “a group of talented people who could inspire talent in one another with their different approaches to fashion design.”

Each jeweler designs her own pieces for Arena CPH, and her name appears on the packaging of her collection, so that, while the overall vision for each season remains intact, all five women are able to add their own stamps.

Riis-Hansen’s work, which is the most romantic, for example, is shown alongside Harslof’s more whimsical creations, such as popsicle pendants. Critics, however, might wonder if, with so many cooks in the kitchen, Arena CPH lacks a united creative vision. Split a company too many ways and it falls apart, but limit your designers’ freedom and the collective itself does.

Arena CPH, however, seems likely to avoid these pitfalls. “Bringing five very strong individuals into one group in kind of a frame has not been a problem at all,” Roestbjarag says. “Quite the contrary, bringing in what each designer has in their bag already, inspiring and being inspired by others, that really is the core here.”

“It’s fun and challenging,” says Riis-Hansen. “You’re being moved in directions you would never go yourself.

“You can get a lot more done and be more effective about doing it when you bring other people’s experience and skill sets to bear,” says Donald Hearn, who has been around the collective block himself. He was one-third of the fashion group ORFI, the Organization of Returning Fashion Interest, which disbanded in 2000 after several years of media hoopla. Now he is a member of a trio once again, partnered with stylist Simonez Wolf and retailer Isa Saalabi, on Wlvz, a collection of gritty urban men’s wear and accessories.

Even with so many fledgling designers going off on their own, hoping to become marquee names, there’s still a certain appeal to the collective mind-set. Gorrow of Tsubi says, “You work hard with your gang, and you build your own little mountain. I reckon if you go up to the top by yourself, you’ll be lonely. At least when we get to the top, we’re going to have a party.”