Black may be the new runway religion, but color ruled at the Pret a Porter and Who's Next trade shows here. 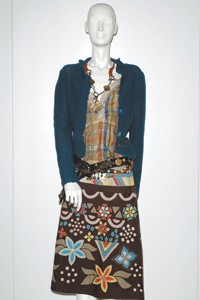 PARIS — Black may be the new runway religion, but color ruled at the Prêt à Porter and Who’s Next trade shows here.

Romantic confections, feminine frills with embroidery and lingerie looks again will be the staples of summer, retailers and exhibitors said at the shows at the Porte de Versailles exhibit halls.

Business was solid, as exhibitors reported brisk order writing. Some retailers said their buying budgets would grow by up to 30 percent for the spring-summer 2006 selling season.

Dresses were another major story.

“We’re seeing a lot of what we’ve seen in the past: light and pretty, with colors and bohemian styles,” she said. As for business, Schur said sales have been “good,” but that she would keep her budget on par with last year.

Jacqueline Ferrarini, who runs Aux Sylphides, a women’s store in Lausanne, Switzerland, said her business had been “tough.”

“The price of gasoline is high and people, in general, aren’t spending as much on frivolous pleasures,” she said, adding she would keep her budget at the same level as last year.

Nonetheless, some retailers preached a prudent buying approach to the season.

“There are so many shops opening, competition has increased tremendously and customers are very spread out, so it’s important to choose carefully,” said Pauline James, buyer for Gallery 28, a women’s wear boutique in London.

“I’m being very cautious,” agreed Fiona Penman, co-owner of Penman Harris, a women’s wear and accessories shop in London. “We buy in small quantities, even if we have to reorder. It’s better not to overcommit.”

Other buyers predicted a more buoyant season. Lina Alnashwati, who runs Glamour Boutique in Kuwait, said her budget would grow by 30 to 40 percent, thanks to strong business generated by feminine fashions.

And Larisa Prikhodko, who next year will open a shop in Moscow, said she is betting on ultrastrong business from Russian women hungry for fashion.

Exhibitors said southern European and Asian buyers fueled business at the shows. At Tara Jarmon, the French moderate fashion house, Vittorio Orebi, commercial director, said sales at the show had surged 50 percent from last year, thanks to orders from Asia, Russia and Italy.

Didier Parakian, who runs his self-named fashion brand out of Marseilles, said “this has been our best season ever. There have been a lot of Russians, Middle Eastern clients and English.”

This season was special for the Prêt, as it celebrated its 100th show and its 50th anniversary. Jean-Pierre Mocho, the show’s president, said he and his team had rearranged the event to facilitate order writing and that most exhibitors had reported good business.

“Retailers and exhibitors alike were positive for the season,” Mocho said.

At Who’s Next, buyers said skirts and dresses were the story for next summer. But shorts — either tight or bloomers — remain a must. Some buyers said collections had less denim than in the past.

Bos, who is banking on blue and green hues for next summer, searched for Fifties looks and placed orders at Limbo, a Helsinki women’s fashion label, and Babbu, based in Cesena, Italy.

Bos said she would increase her budget by 40 percent, but noted that her store had recently opened and had not met its full capacity.

Ethnic prints were also a common trend throughout many collections. “African prints are everywhere,” said Penman, who placed orders at Irene Van Ryb.

Though color remained a staple, buyers at Who’s Next noticed collections were getting a bit darker.

“Black is coming back,” said Beate Heckmann, buyer for Pro Idee, a high-end mail-order firm based in Aachen, Germany.

“There are many pastel colors, but overall, collections seem to be getting darker, more classical and more timeless,” said Charlotte de Staël, owner of Shine, a shop in Trondheim, Norway.

De Staël, who will increase her budget for next summer by as much as 30 percent, opted for the shorts fitted at the knee at Manoush, as well as collections at Orla Kiely and Les Petites.

“There are hardly any Americans,” said Laetitia Ivanez, who designs the contemporary Les Prairies de Paris line, which has a Russian gypsy theme next season. She said standouts were “casual dresses that can be worn out or to the beach.”

Relaunching her label after four years of putting her business on pause, French designer Sylvia Rielle played with feminine styles such as blouses and dresses with hints of ethnic elements such as African motifs and rock ‘n’ roll touches. Gold pedal pushers were priced at 65 euros, or $78 at current exchange, at wholesale and short-sleeve blouses for 60 euros, or $72, at wholesale were selling well.

Who’s Next organizers said 26,526 buyers visited the show, down 6 percent from last year. Attendance figures for the Prêt were not available.