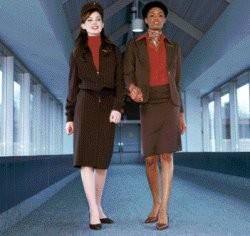 NEW YORK — In Hollywood’s latest high-flying satire, “View From the Top,” Gwyneth Paltrow, a leading Hollywood fashion maven, idealizes the life of the flight attendant. She gets her start on a low-rent commuter shuttle and works her way up to the international first-class routes, the pinnacle of success in the rarefied world of flight service. Her uniform reflects her career, which starts at skintight, breast-baring outfits then moves on to an ultrachic, fitted wool suit with Prada-type shoes. Spielberg’s “Catch Me if You Can” similarly fetishized stewardess’ frocks.

Call them what you like, the name, just like their image, has changed radically over the years. The commercial aviation industry developed out of the U.S. Air Force, and the image of the cabin attendants followed suit. The original eight “Airline Hostesses” who worked for Boeing Air Transport in the Thirties, a forerunner of United Airlines, were all nurses and were outfitted in Florence Nightingale-esque capes.

But the airline industry didn’t find a fully articulated style until the Sixties when Mary Wells, the first woman to run her own ad agency, was hired by Braniff Airways head Harding Lawrence (he eventually became her husband). She commissioned designer Alexander Girard to update the terminals and Emilio Pucci to design the uniforms. Together, they created an Op-Art fantasy world replete with all the saccharin colors of the rainbow. And Wells was none too subtle about making the connection between flight and sex. Stewardesses were outfitted in brightly colored Pucci designs and their strict physical requirements (weight, height, age and even marital status were dictated in those days) made sure that tired businessmen had some pretty eye candy for their flights.

Pucci designed Braniff’s uniforms for the next nine years and created six distinctive styles. The most famous were advertised as the Braniff “Air Strip.” The outfit consisted of several layered components that were removed (or in some cases, added to) during the flight. The stewardess greeted passengers in a reversible wool coat accessorized with a pillbox hat and Pucci print scarf. By flight’s end, the stewardesses had stripped down to their tunics and culottes.

Braniff may have been the leader in flight design, but soon other airlines were outfitting their stewardesses in fashion-forward gear, as well. Over at United, Jean Louis, taking a cue from Norman Norell, designed jumpers to be worn over knit blouses with black accessories and a faux-fur hat. The girls at TWA had a youthful look: V-neck sweater, striped blouses and capes and boots pulled together with a miniskirt. Southwest Airlines went so far as to dress their stews in go-go boots and orange HotPants. Of course, the French were part of this fashion movement, as well. Air France hired Christian Dior and Cristobal Balenciaga in the Sixties. Pierre Cardin, Mary Quant, Valentino, Oleg Cassini and Evan-Picone also designed uniforms.

In contrast to Pucci’s bold, exuberant style, Halston’s muted earth-tone palette became Braniff’s new look in 1977. Perhaps in deference to the weakening economy and the oil crisis, uniforms in this era took on a more somber and minimal mood. And when the airline industry was deregulated in the Eighties, air travel became more and more like bus travel. Airlines went unisex and back to military-inspired uniforms. While TWA went high end by hiring Ralph Lauren, Delta and US Air asked uniform manufacturer Greif to create their outfits.

But perhaps glamour and sex appeal will find a place again in the air. Christian Lacroix was recently commissioned to design Air France’s uniforms and British Airways gave Julien Macdonald a call. Also, two books, one a rerelease of the popular Sixties paperback, “Coffee, Tea or Me,” chronicling the wild adventures of two fictitious stewardesses, and “Come Fly With Us: A Global History of the Airline Hostess,” will hit bookstores shortly.

Or maybe the trend will be that of the new Hooters Air, which recently took to the skies with Hooters girls working alongside the regular flight attendants. So much for the jet set.— Roxanne Robinson-Escriout