Coming to America: Armani Arrives in N.Y. With Plans for Growth

Giorgio Armani’s big plans for the U.S. kick off when he comes to New York for a fashion show, to sign books and get a lifetime achievement award. 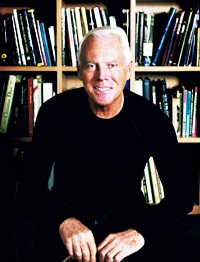 They start this week, when the designer arrives on one of his typical whirlwinds for his first official visit to New York since 9/11. He will stage a massive fashion show, sign books he’s helped write and pick up a lifetime achievement award for his contribution to fashion.

Beyond that, though, there is a larger commercial strategy. Armani wants to grow his accessories business, open more stores and reach out to a younger clientele. He has a mission to “democratize” fashion and touch a broader public — make that the general public, which the designer is incidentally inviting to his fashion show Tuesday night through an ad in Paper magazine. Thousands are expected to attend the show at Pier 94 and an A|X Armani Exchange after party. Such an approach goes against the conventional wisdom of a luxury goods industry that thrives on exclusivity, but that’s not going to faze Armani. If he creates some controversy in the process, all the better.

“Naturally, I know that I’m going a bit against the rules in America, where there are nights reserved just for the VIPs and then other nights where everyone is invited,” the 70-year-old designer said in an exclusive interview at his Milan headquarters just a few days before leaving for New York.

“To mix the two together is somewhat unexpected. There will probably be those who will refuse to accept the evening because they don’t want to mix with a different kind of crowd. Democratically, I must say it’s something I really like. It intrigues me and I think that I’ll be breaking the rules slightly,” he added.

It’s not just a moment of provocation for Armani, but also one of reflection. As he visits the country that catapulted him to fame decades ago, he’s also looking to the future of his $1.6 billion company, which turns 30 next year.

Still, when pressed to indicate the most likely scenario, Armani said he can’t be bothered with an initial public offering and whining shareholders, so linking up with a major industry player makes the most sense.

“Even with a big multinational group that can provide financing, often [the managers] may not understand why you need to do a show that costs $2 million or you invest in a store on Bond Street that loses money. The problem is you have to put your business with someone who is in the [fashion] business,” he said.

This time around, Armani isn’t name dropping on potential partners, although in the past he’s dropped hints that he admires companies such as L’Oréal, his beauty licensee, and LVMH Moët Hennessy Louis Vuitton.

But before pondering that far into the future, Armani first needs to get through a packed schedule of events this week in New York, the highlight of which will be his picking up The Fashion Group International’s Superstar award (see sidebar). Just don’t interpret this crowning achievement as a sign that Armani’s slowing down anytime soon.

“A [lifetime] career award signifies closure or a conclusion, but I just want to be precise that it’s not my case,” he said, acknowledging that he wishes he would be honored for his current work. “It’s an important recognition, but honestly I would have preferred to receive an award for the best collection.”

While the critics’ reviews on his latest spring-summer collection — the same one he will show in New York Tuesday — might have been mixed, Armani shrugs them off as irrelevant to consumers. He said that too many other fashion brands have become lost in the hype and slaves to the trends.

“My product, I believe, is recognized as a product that has value whether it’s my first line or a pair of jeans. You put on a jacket and it fits you well. It’s an incredible privilege that I have,” he explained. “I think those that have success in fashion are those people that stick strictly to a fashion that’s based on creating a product that the public needs.”

Armani has a few plans of his own to meet the public’s needs, with one of the priorities being the younger lines such as Emporio Armani and A|X Armani Exchange. While A|X Armani Exchange already has a significant network of 48 stores in the U.S., there are only 11 Emporio boutiques, a proportionally small number compared with the 30 or so in Italy. Growing the brand means changing its positioning so young customers are less intimidated, Armani said.

“Emporio in the U.S. was a bit forgotten. It got off to a later start than in Europe. At first, Emporio was treated like a luxury brand in the States; we had doormen. It’s one thing to have that for Hermès, another for Emporio,” he said.

Two Emporio stores have opened this year, in Short Hills, N.J., and Plano, Tex. Another is slated to open in Bal Harbour, Fla., next year and the company also is looking at Chicago. A|X Armani Exchange also will open three stores next year.

Armani Casa and accessories are other areas the company has earmarked for growth in the U.S., primarily through third-party retailers. This year, Armani Casa opened three shop-in-shops in specialty stores in San Francisco, Chicago and Seattle and next year another 10 will be rolled out in locales varying from Cleveland to Puerto Rico. A freestanding Armani Casa store also will open in Miami next year.

As for accessories, an area Armani has focused on growing for several years, the designer said he’s seeing increasing demand for his bags and shoes, despite what he deemed a slow reception by department stores. Currently, the accessories collection is sold in 43 doors in the U.S., often sharing space with leading competitors on accessories-designated floors.

Kal Ruttenstein, senior vice president for fashion at Bloomingdale’s, said he’s seen a natural evolution of interest in accessories as customers who buy Armani clothes are looking to complement them.

“The shoes have their own look. The ballet flats are especially good,” he said.

Armani said he believes he’s finally getting the sales space he deserves for these new products.

Yet Armani’s not one to hold a grudge. With nearly 30 years in the business, he understands the ebb and flow of fashion and looks back fondly on the role the U.S. has played in his career.

“America has been extremely important for me because that’s where I was first truly recognized,” he said.

Recognition is of course no longer a problem for Armani, but that’s not stopping him from reaching out to an even broader audience with his fashion show.