For its first retrospective in Mainland China, Comme des Garcons didn?t delve into its archives of avant-garde fashion. 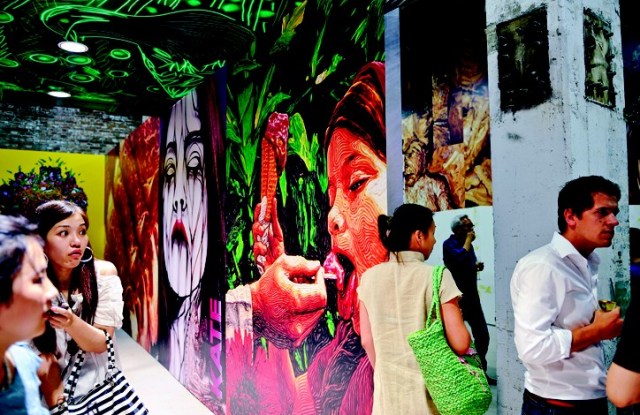 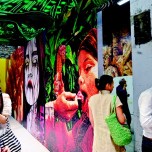 BEIJING — For its first retrospective in Mainland China, Comme des Garçons didn’t delve into its archives of avant-garde fashion. Instead, the Japanese label converted 5,300 square feet of gallery space into a maze of iconic Comme des Garçons print matter — corporate images, magazine advertisements and invitation cards — from the past 25 years.

This story first appeared in the July 25, 2008 issue of WWD. Subscribe Today.

“Printed matter is a crucial part of expressing the spirit of Comme des Garçons,” Adrian Joffe, the company’s managing director and the husband of creative director Rei Kawakubo, told WWD before the exhibit’s opening this month. “In a way, seeing a dress on a mannequin is less powerful than seeing [printed matter] blown up.”

The opening attracted a large crowd, including Chinese actress Zhou Xun, clad in a formless Comme des Garçons dress with three Peter Pan collars. Kawakubo made a brief appearance, but true to form, she steered clear of the busy traffic inside the gallery, lingering in an alley outside.

While many visitors said they liked the brand and its creative presentation, only a few said they actually own any of the fashion label’s pieces. Andy Yu, a guest clad in a T-shirt from the Play collection, praised the unique designs and said the brand is getting “more and more popular.”

Building on that momentum, Joffe confirmed that Comme des Garçons will open a flagship here in the Sanlitun area this year. Known as the city’s main bar drag, Sanlitun is transforming itself into a key shopping district, housing the recently opened Adidas megastore and Uniqlo.

One of the goals of the exhibition, which runs through Sept. 30, is to create brand awareness and educate consumers.

“We see great potential here,” Joffe said. “Chinese people get [Comme des Garçons], they understand it more than other markets.”

Comme des Garçons opened its first store in Mainland China in April in the new Beijing shop of I.T, a Hong Kong-based retailer and the label’s China distributor.

Joffe was mum on the Beijing flagship’s design concept except to specify that it will be grander than the new “pocket stores” the company will open this year in Paris that will measure less than 200 square feet and carry mostly wallets and perfume.

“Rei doesn’t want to demean the intelligence of the population,” Joffe said. “She wants to give Beijing the strongest concept, a flagship store, first.”

At the exhibit, visitors move between rooms plastered in the brand’s landmark campaigns and advertisements. The first area brings viewers into close contact with black-and-white images from the early years: elephants shot by André Kertész for spring-summer 1988, a gritty portrait of a female model shot by Peter Lindbergh in 1991 and a 1994 Paris collection invitation showing two nerdy-looking men dressed in identical suits and ties with the words “Gilbert & George” scrawled in the background.

Kawakubo’s avid interest in the Argentine art collective Mondongo dominated the rest of the exhibition. Mondongo creates images using everyday items such as plasticine, sausages and cheap biscuits. The group collaborated with Kawakubo to tweak some of its provocative works, like piles of nude, cherub-like babies and stimulating profiles of couples midkiss, for use in Comme des Garçons’ 2008 campaign.

There are few direct references to fashion in the exhibit except for a neon advertisement with the words “power of fashion” inside one room and a few campaign images that actually show models in Comme des Garçons clothing. There is also a small space set up like a minishop, complete with racks of T-shirts from Comme des Garçons’ Play collection. At first glance, most people confused it for a gallery shop, but staff informed the inquisitive guests that the T-shirts were not for sale.

At the opening, people gravitated to two narrow, tunnel-like rooms with overhead spotlights. The rooms seemed to inspire impromptu photo shoots. One group of twentysomethings struck a pose worthy of their bizarre Mondongo backdrop: a girl sprawled on the ground while two friends balanced storklike in outlandish poses, all three sporting slightly maniacal expressions.

As Joffe put it: “You can’t control how people will react to your creativity.”