Comme des Garçons and Dover Street Market have teamed up to create "an epic sale of mammoth proportions" opening this Friday to the public. 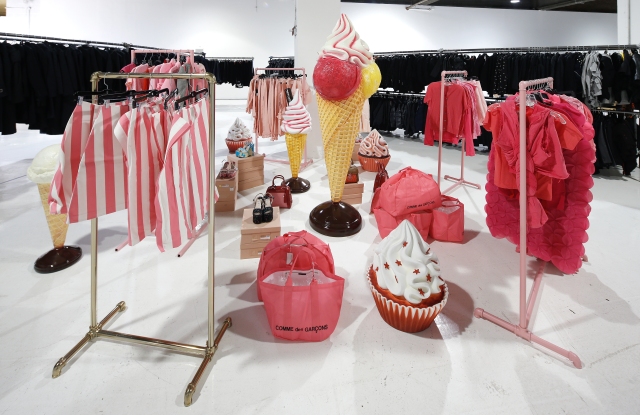 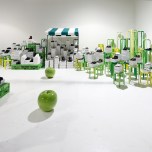 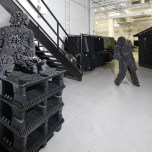 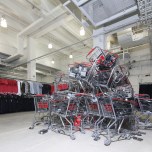 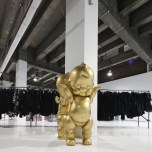 Sample sales. For savvy shoppers, they’re hot tickets. Those in-the-know — and even those not — have probably been to a few, especially if they live in New York City. These highly anticipated events, which labels conduct semiannually to unload the previous season’s samples and excess stock, are routinely held in industrial warehouses. And though the deep discounts off retail can be rewarding, the experience can leave much to be desired. Hours-long lines around the block to gain entrance are not uncommon. Shoppers might try on clothes in makeshift changing areas — or often, in plain sight — elbowing each other for that last blouse or the only remaining pair of size 7 heels. It’s not exactly sexy — or fun.

Not so in the hands of Comme des Garçons and Dover Street Market, who’ve teamed up to create, in the words of a flier sent to press, “an epic sale of mammoth proportions” opening this Friday to the public. Dubbed Super-Market-Market, the four-day event, themed like a luxurious supermarket sweep, will take place at SoHo’s Skylight Clarkson Square, which fashion insiders will recognize as one of the newer venues of New York Fashion Week.

And then there are the visuals. A far cry from your run-of-the-mill presentation with a few racks and mirrors, the Super-Market-Market is more akin to an epic gallery opening, featuring art installations throughout, from black monster sculptures to prints by photographer Roger Ballen. Two giant gold cherubs — or kewpie dolls — greet shoppers at the entrance. Further inside, near the men’s wear, an artful stack of shopping carts filled with Pharrell Williams’ unisex Girl fragrance serves as the centerpiece of the room. “It’s a mix of repurposed DSMNY and CDGNY installations, props and displays along with some newly created ones, made specifically for Super-Market-Market by our visuals team,” Gilchrist said. Artist Baron Von Fancy created the sale’s signage.

As for the merch, shoppers can expect discounts up to 70 percent off for Comme des Garçons brands and up to 80 percent off for designers sold at Dover Street Market, with merchandise restocked daily. During an early preview, staff members were seen unpacking hundreds of Comme des Garçons wallets and backpacks into display boxes. A quick glimpse of the footwear selection found women’s shoes by Miu Miu, Azzedine Alaïa, Gianvito Rossi, Ann Demeulemeester, Walter Steiger and Robert Clergerie, among others. Archival pieces adorned the color-coordinated racks, such as a white embellished plastic dress from Simone Rocha’s spring 2014 collection priced at $663 from an original retail price of $3,315; a yellow Neoprene top from Jacquemus’ fall 2014 collection priced at $147, a price drop from $735, and a safari skirt from Valentino’s spring 2015 collection selling for $318 from $1,590. Looks from Raf Simons, J.W. Anderson, Christopher Kane, Undercover, Erdem, Giambattista Valli and Stephan Schneider were also spotted.

The atmospheric event will feature playlists by Calx Vive as well as live DJ sets from Minimal Wave, Slava, Katie Sullivan and Mike Q. Aaron Bondaroff’s Know-Wave Radio will broadcast live from the event on Sunday from 2 to 6 p.m., and coffee, cold drinks and cookies from Rose Bakery should serve to energize the eager crowds. All of it certainly elevates experiential retail to new heights. “We always strive to give our customers a special shopping experience,” Gilchrist said. “It is our goal to give them a reason to make the journey to one of our stores or events. And we apply this same thinking to the sample sale…I think our clients totally expect this and the more we do, the greater the expectation becomes.”

Production on the project was led by Comme des Garçons’ New York-based visual and operations teams. “Like our biannual New Beginning, this is one of the special moments that our entire team comes together. All staff from the CDGNY and DSMNY offices and stores pitched in and collaborated to make Market-Market happen; without this huge team effort it would not be possible,” Gilchrist said. Rei Kawakubo was also involved in the event from its conception. “She approved the venue and the theme and then gave feedback on the space design that was presented by our visual team,” he said.

Despite the luxe atmosphere, one imagines that the prevailing mood at the much-hyped event — a beefed-up security staff not withstanding — will not exactly be serene. Overheard by one attendee during the preview: “I think whoever people are when they’re shopping at a sample sale — that’s their truest self.”