The shop, which underwent its biannual “New Beginning” and reopened Thursday to the public, saw its biggest overhaul since 2013. 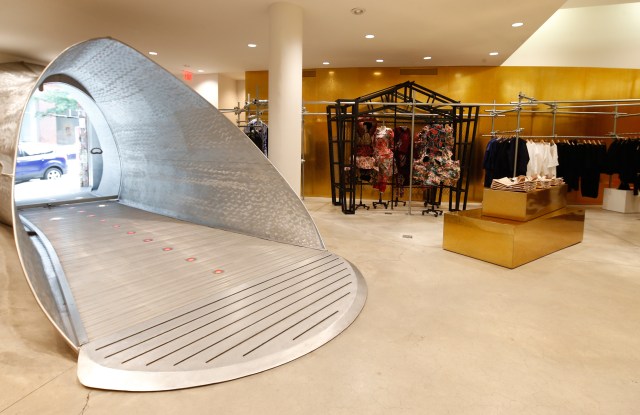 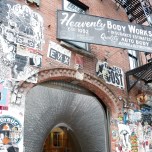 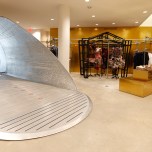 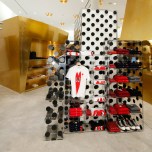 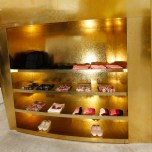 Most retailers wouldn’t dare shutter their shops twice a year — forgoing several days of sales — simply to rejigger seasonal merchandise. It would be antithetical to the very premise of retail: selling.

The company’s “New Beginning” concept, executed across all Dover Street Market and Comme des Garçons stores worldwide, exists to refresh each location with new collections, installations and exclusive items biannually. Today, Comme des Garçons’ flagship in Manhattan’s Chelsea neighborhood reopened to the public with extended hours and a shiny new interior after being closed for a full week’s worth of renovations — its biggest overhaul since 2013.

“Rei [Kawakubo] doesn’t like mixing spring/summer and fall/winter clothing [in the store],” said Comme des Garçons’ chief executive officer and Kawakubo’s husband, Adrian Joffe, matter-of-factly during a walk-through of the space. “Each collection has a theme and a story to tell. For Rei, it’s anathema to mix spring and fall [merchandise]. Plus, it draws excitement and newness.”

In addition to being newly stocked with the fall 2016 collection, the Chelsea flagship features several updates — most notably a caged display case near the entrance, which currently showcases five of Kawakubo’s 18th-century punk-themed runway looks in their boldly architectural, armorlike glory. “We want this to be very much like the Aoyama flagship in Tokyo, Rei’s main store,” Joffe said. “They often do displays, and before, in Chelsea, we had no room.”

Housed near the display case is a designated area with new collections from Sara Lanzi, Elena Dawson, Christopher Nemeth, Egg and Daniela Gregis — each brand handpicked and curated by Kawakubo — none of which are widely distributed in the U.S. “It’s everything she likes,” Joffe said. “There’s nothing in the store that she doesn’t like — unlike at Dover Street,” he continued with a laugh. “Over there, it’s a different kind of thing.” (Dover Street Market’s New York outpost is currently closed until Saturday, when it will reopen with updated collections, furniture and installations. In September, the store will unveil a Balenciaga pop-up shop and ground-floor installation, timed to coincide with New York Fashion Week.)

Another update to the store is a more miniaturized display of the Comme des Garçons Pocket shop, featuring new styles from Comme des Garçons Play, Wallets and Parfum. (The stand-alone Pocket shop, a convenience-store retail concept opened last August, is located a few blocks away, at 112 10th Avenue.) “Thanks to Pocket shop and Play, there are more and more people discovering Comme,” Joffe said. “Above all else comes the Comme des Garçons collection. But Rei is a businesswoman, and if there was no business behind [the runway collection], it would be meaningless, you know? It doesn’t matter how beautiful or new the collection is [if there’s no business.] A lot of people still get confused with all of the [Comme des Garçons] brands, which is not surprising. But they all have a different target and a different identity.”

Much like at the Tokyo flagship, the Chelsea store offers the rarest selection of Comme des Garçons runway looks — a decidedly less commercial selection than what can be found at Dover Street Market — such as a pink PVC jumpsuit priced at $4,780. The store also features newly installed Junya Watanabe and Comme des Garçons Girl spaces. One Junya Watanabe men’s trench, retailing for $2,500, featured a solar-powered battery pack in the interior lining that could charge an iPhone.

During the walk-through, Joffe referred to the Chelsea store as a “gold temple.” (After red and black, gold is Kawakubo’s third favorite color, spun throughout the store’s elaborate, curved pillars, furniture and ceiling lights.) “I think it’s just a very special, secret kind of place — a temple, really,” Joffe said. “It’s not a place where people come and worship, but it’s offering her fans something really pure — a real essence of the expression of her values.”

The store’s two notorious dressing rooms, which had been designed without doors, have also been redesigned with more privacy. But one detail that remains firmly unchanged is the bulbous, aluminum tunnel designed by Future Systems, which leads shoppers into the store’s unmarked, graffiti-covered entrance on 22nd Street. “Oh, they can’t ever move the tunnel,” Joffe said. “That’s iconic.”