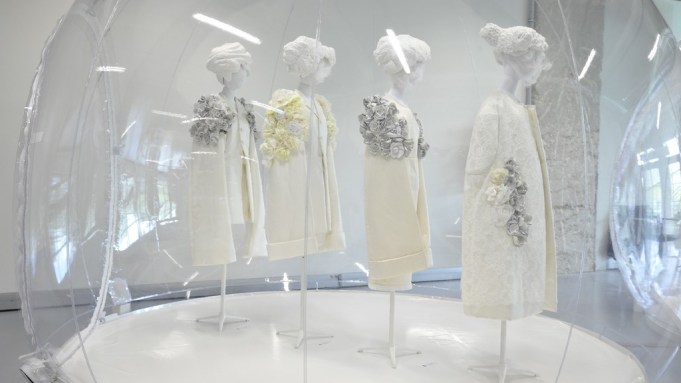 According to a tally by fashion curator Olivier Saillard, that’s how many outfits came down international runways for the spring season.

Standing out amid this “overabundance” of fashions was the “White Drama” collection by Rei Kawakubo of Comme des Garçons, which Saillard described as a beacon of “poetry” and pure bravado “outside of commercial conventions.”

Which is why Saillard, director of the Musée Galliera, chose to exhibit the collection in its entirety as part of the museum’s ongoing series of off-site exhibitions, pending completion of its renovation in 2013. To his knowledge, it’s the first time a museum has done so with a fashion designer.

“It is hard to pick one, two or three pieces from a collection that is practically a manifesto,” Saillard enthused. “All of it is beautiful.”

Twinned with the Kawakubo expo at Les Docks — a new design and cultural center on the eastern fringes of Paris — is “Cristóbal Balenciaga: Collectionneur de Modes,” documenting the collecting habits of another fashion great, and how treasures from the 18th and 19th centuries influenced his designs. Both exhibitions open to the public Friday and run through Oct. 7.

Given carte blanche to exhibit her 33 looks in a rectangular, industrial space, Kawakubo chose to encase her dresses — styled exactly like the runway — in clear plastic bubbles.

“I was interested to put the clothes of this collection in a different environment to the show. I thought about making a second space within the existing as it was a new space of the city of Paris,” she told WWD. “I would be happy if people felt that ‘White Drama’ has become even more dramatic.”

Saillard said giving such proximity to the clothes reveals intricacies impossible to divine from clicking through images on the Internet. To wit: Small sequins glisten on a delicate lace top, and the fabric roses trapped in tulle sacks on a bubble skirt are not, in fact, all white, but blushing peach and lemon yellow.

Adrian Joffe, chief executive officer of Comme des Garçons International and Kawakubo’s husband, said that the collection — meant to express “the happy and sad things that happen in life through the medium of white” — has received “more than usual press interest, and it’s been a great season in the stores so far, too.

“Most of the runway pieces were sold and produced, albeit not in great numbers,” he noted.

The Balenciaga exhibition next door, underwritten by Balenciaga and its parent PPR, has a more academic feel, the clothes and artifacts displayed in industrial shelving and drawers, similar to how museums actually store their reserves.

In fact, the exhibition displays a bounty donated to Galliera, shown for the first time, and 40 years after the acclaimed couturier’s death. It includes about 40 couture coats and dresses designed by Balenciaga from 1937 to 1968, along with the costumes, fabrics and books he collected.

He, like Kawakubo, possessed an “independent spirit,” Saillard said, showing off the famous sloping “Darth Vader” hat from 1967 that was actually inspired by what Spanish fisherman wore to keep rain off their necks.

Juxtaposed against historic costumes, the modernity of Balenciaga’s designs is striking. The extravagant froth of an evening coat festooned with black velvet ribbons and lace, circa 1900, was distilled into a tea dress in broderie anglaise that could be worn today, even though it was designed in 1939.

Balenciaga’s dense monochromatic embroideries and dramatic volumes echo some of what’s seen next door — although the sleeves of the Spanish designer’s monastic evening coat, inspired by liturgical garments, do not graze the floor like Kawakubo’s.

Saillard noted Galleria would stage three more off-site exhibitions — including one devoted to couture at city hall here, and three performance works starring Tilda Swinton — before it reopens on the Avenue Pierre 1er de Serbie, likely with a show devoted to Azzedine Alaïa.

Besides temporary exhibitions, Les Docks — billed as a new destination for fashion and design — is a mixed-use facility incorporating a fashion school, boutiques, cafes and nightclubs.