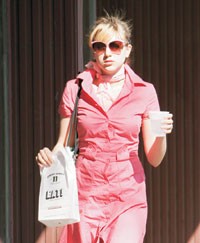 With the NCAA Tournament a thing of the past, WWD visited the campuses of all 11 members of the Big 10 to rank students on what really counts — their sense of style. What our reporters discovered during conversations with coeds and strolls around campus is that a school’s fashion quotient is not necessarily a function of its size, price tag or geographic location — although these are factors. Rather, it comes from a much-harder-to-quantify willingness among students to use their wardrobe as an expression of individuality.

Without statistics, science or even a win-loss record to guide the process, WWD ranked Big 10 student style.

1. University of Michigan, Ann Arbor, Mich.
Undergraduate enrollment: 23,312
In-state tuition: $8,868
Uberliberal Ann Arbor ensures that there’s a motley crew of fashionable types available — from the label-heavy out-of-staters to scenesters, punks, hippies and, yes, Mods — and the retail scene here is equally eclectic. Others in the Big 10 tend to stereotype the Wolverines as “snobby,” but with good reason. After all, if you’ve got it, flaunt it.

2. The University of Iowa, Iowa City
Undergraduate enrollment: 17,774
In-state tuition: $5,396
Given that 64 percent of Hawkeyes hail from mostly rural Iowa, the range of looks they sport is nothing short of impressive. But these home-grown style-seekers are unbowed, creating fashion by making their own clothes, altering finds from vintage shops and trawling downtown Iowa City’s excellent selection of boutiques. “It’s Iowa, but it’s not Iowa,” quips senior Arna Wilkinson. “Know what I mean?”

3.Northwestern University, Evanston, Ill.
Undergraduate enrollment: 7,797
Tuition: $30,085
The fashion is subtle on this suburban Chicago campus. “We’re more laid-back, less hard-edged,” says senior Abby Wolbe, comparing her schoolmates to those in other major cities. While Marc by Marc Jacobs, C&S and Seven rank as favorite labels, North Face comes out on top, thanks to the winds ripping off Lake Michigan. Still, with Chicago’s bustling art, music and shopping scenes and Northwestern’s considerable theater program, one might expect these students to show more fashion flair than laissez-faire.

4.Indiana University, Bloomington, Ind.
Undergraduate enrollment: 28,559
In-state tuition: $6,777
Despite the homogeneous, yet style-conscious looks of most Hoosiers, IU has a strong and visible group of true fashion aficionados. “I’m die-hard about fashion,” says Patrice Worthy, who, as fashion columnist for the Indiana Daily Student, attends and reviews New York Fashion Week. “There are people out here who know how to pronounce Givenchy.”

5.Ohio State University, Columbus, Ohio
Undergraduate enrollment: 33,421
In-state tuition: $6,765
“A country town with a city suit on” is how one student described Columbus. Although OSU’s rustic ambience is undeniable, the extra trappings, such as the Wexner Center for the Arts, are enough to make the school a destination for the fashion curious, not to mention the spirited apparel and merchandising students who dare to wear stilettos to an 8:30 a.m. class.

6.University of Wisconsin, Madison, Wis.
Undergraduate enrollment: 27,179
In-state tuition: $5,860
The laid-back style of the Badgers generally mirrors the slightly scruffy, left-of-center character of the city. But despite the widespread devotion to flip-flops and school sweats, fashion still exists here, in everything from DIY T-shirts to sparkly beaded moccasins. Fashion-conscious students from the coasts, referred to as “Coasties,” further ratchet up the style quotient and account for the fairly impressive retail offerings.

7. Michigan State University, East Lansing, Mich.
Undergraduate enrollment: 31,115
In-state tuition: $7,088
You’re more likely to find MSU students boasting of their in-house creamery, but for an institution that began as an agricultural school, the Spartans have a boisterous niche of fashion students, including three student groups dedicated to fashion, one of which, the Student Apparel Design Association, just closed the academic year with a 31-designer showcase before an audience of 2,500.

8. Purdue University, West Lafayette, Ind.
Undergraduate enrollment: 29,051
In-state tuition: $6,092
True fashionistas may be fewer and farther between on this predominantly agriculture- and engineering-oriented campus, but when you find them, they’ve got bold taste and a unique personal style. Purdue has an impressive apparel design and technology program, and students even have the option of spending their junior years at the Fashion Institute of Technology.

9. University of Minnesota, Minneapolis-St. Paul
Undergraduate enrollment: 26,173
In-state tuition: $7,116
On a tripartite campus that houses an artsy East Bank and a more conventional West Bank crowd in Minneapolis, plus future farmers in nearby St. Paul, Gopher fashion is understandably divided. However, distinctions fade when the mercury drops to 30 below and stylish takes a backseat to practical.

10. University of Illinois, Urbana-Champaign, Ill.
Undergraduate enrollment: 28,095
In-state tuition: $7,467
Illini have to work hard for their fashion. “We’re in central Illinois — we make due with what we have,” says senior Amara Enyia. But what they lack in options, they make up for in spirit — from Flikk, a senior Spanish major who serves as campus couturier, to the newly inaugurated Fashion Club. “I want the club to be less a veneer of cliqueishness than a lightening rod for people to gather around,” says president Alen Romero, a freshman. “Fashion has always been about iconoclasm, rule-bending and energy.”

11. Pennsylvania State University, University Park, Pa.
Undergraduate enrollment: 33,462
In-state tuition: $9,206
By all accounts, Penn State has the resources to put it at the top of the Big 10 list. But a sea of popped-collars, candy-colored ruffled skirts and designer logos does not a fashionable school make. Points to the pockets of students who maintain their style, but even they give PSU a pretty grim sentence. One student notes of her high school peers: “Anyone who had definitive style doesn’t go here.”